In September of last year, the initial salvo of Samsung SSD 980 Pro drives was launched. At the time, Samsung SSD 980 Pro PCIe 4 NVMe drives in capacities of 250GB on up to 1TB were made available, but a 2TB drive had been announced and was on the roadmap as well. It took a bit of time for Samsung to make the 2TB drive a reality, but nevertheless it is here now, and we’ve got one on hand for some benchmarking and evaluation.

Except for its obviously higher capacity, the 2TB Samsung SSD 980 Pro doesn’t differ from the smaller drives that were previously made available. Due to how the drives function, however, the higher capacity does alter the performance profile a bit. We’ll explain exactly how and why that happens when we get to the benchmarks. For now, here’s a quick breakdown of the drive’s main features and specifications. Take a gander and we’ll dig in deeper down below...


Find The Samsung SSD 980 Pro 2TB @ Amazon
With the launch of the 2TB model, Samsung SSD 980 Pro Gen 4 drives are now offered in four capacities -- 250GB, 512GB, 1TB and 2TB. Our article featuring the 250GB and 1TB models was posted when the drives were initially made available, so if you’d like to see how the lowest capacity drive performs, check out that article -- we’ve got the 1TB drive listed in our benchmarks for easy comparisons, though.

All of the drives in the Samsung SSD 980 Pro series use the common M.2 (2280) ‘gumstick’ form factor, but the performance between the different models varies based on their capacity. The 250GB drive is rated for peak read bandwidth of 6.4GB/s, with 2.7GB/s writes, for examples, but the larger 2TB drive featured here offers higher speeds that top out at up to 7GB/s reads with up to 5.1GB/s writes.

The Samsung SSD 980 Pro drives’ max IOPS ratings also vary depending on queue depth, but peak at right around 500K – 1,000K at QD32 depending on the capacity. The drives’ endurance ratings vary based on capacity too, as you would expect, with the 250GB drive landing at the 150TBW mark and the big 2TB drive hitting 1200TBW. That’s half of what the previous-gen 970 Pros are rated for, but should still be plenty for the vast majority of consumer use cases.

The drives are also outfitted with a new controller, dubbed Elpis. In addition to the aforementioned native PCI Express 4.0 interface, the Elpis controller supports 4x the number of maximum queues as the Phoenix controller used on the 970 series (32 vs. 128). And the Elpis controller is manufactured on a leading-edge 8nm process as well.

The Elpis controller supports all of the features you’d expect from a modern SSD, like TRIM, garbage collection, S.M.A.R.T., etc., in addition to various encryption technologies. Depending on the capacity, all of the drives also feature 512MB to 2GB of discrete LPDDR4 DRAM cache. The 2TB drive here packs the maximum 2GB of DRAM.

The Elpis controller has a nickel coating that helps to dissipate heat and the underside of the drives has a thin copper plate hidden underneath the decal to aid in cooling as well – you can see the copper if you look closely around the edges of the decal. 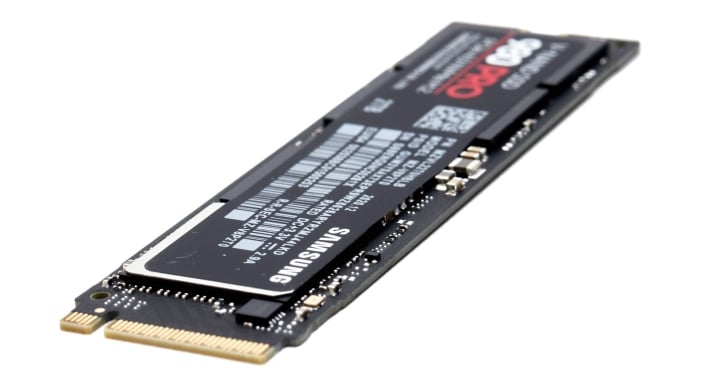 In somewhat of a twist, Samsung SSD 980 Pro drives feature TurboWrite technology, similar to Samsung EVO-branded drives. TurboWrite uses a portion of the drives’ V-NAND as an SLC write buffer, which results in improved write performance, as long as the buffer isn’t exhausted. With 980 Pro drives, Samsung has tweaked the algorithm and TurboWrite capacities versus older drives, so it’s virtually transparent to end users, at least on the higher capacity drives.

TurboWrite will allow the Samsung SSD 980 Pro drives to perform well in the vast majority of consumer-class workloads, because writes are fastest when the SLC buffer is being utilized. Once the buffer is exhausted, write performance either tapers off or becomes somewhat more erratic on the lower-capacity drives (512GB and below), but on the 1TB and 2TB drives, the SLC cache is flushed fast enough to maintain strong write performance across the entire capacity of the drive.

Samsung warranties the SSD 980 Pro series drives for 5 years, which is in-line with previous-gen offerings. Anecdotally, in all of the years we have been evaluating Samsung SSDs, we have yet to have one fail. Every one of the Samsung drives we have on hand, including much older SATA-based solutions, are still functioning properly. 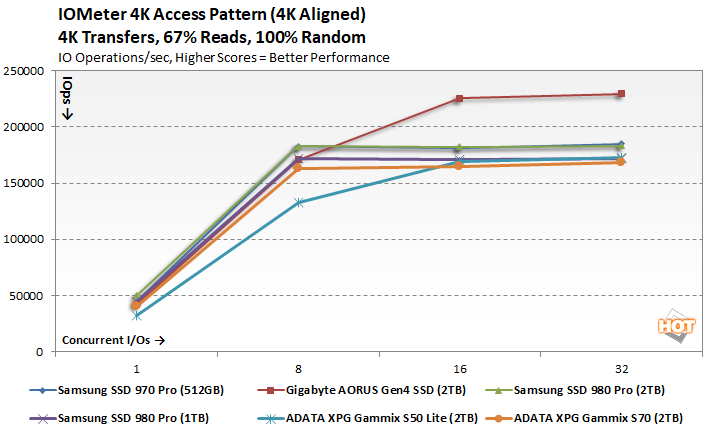 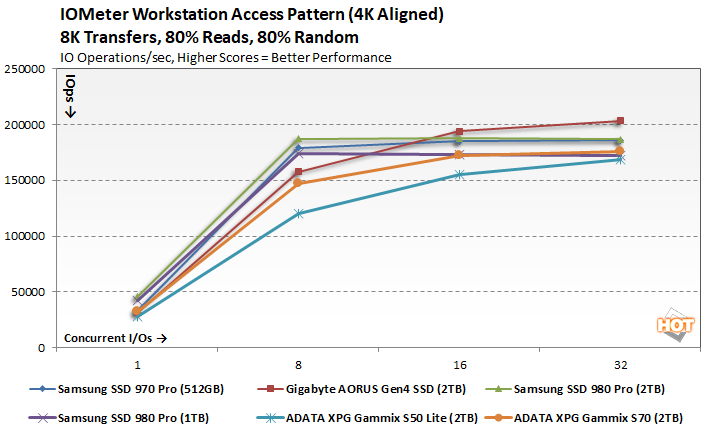 For the most part, the new 2TB Samsung SSD 980 Pro performed right on par with its lower-capacity 1TB counterpart, though it did pull ahead slightly at the lower queue depths. 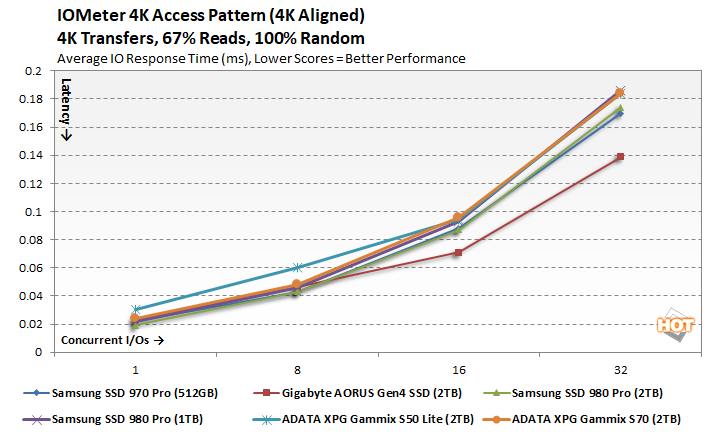 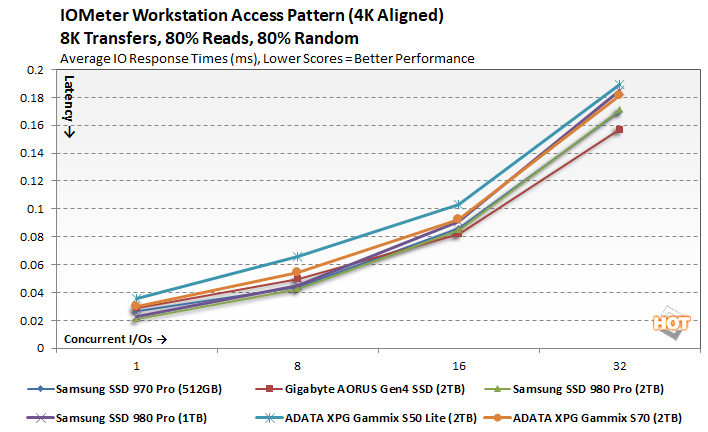 The latency characteristics of the 2TB Samsung SSD 980 Pro are also right in-line with the lower-capacity 1TB model, which are among the best in the group according to the IOMeter access patterns we used for testing. 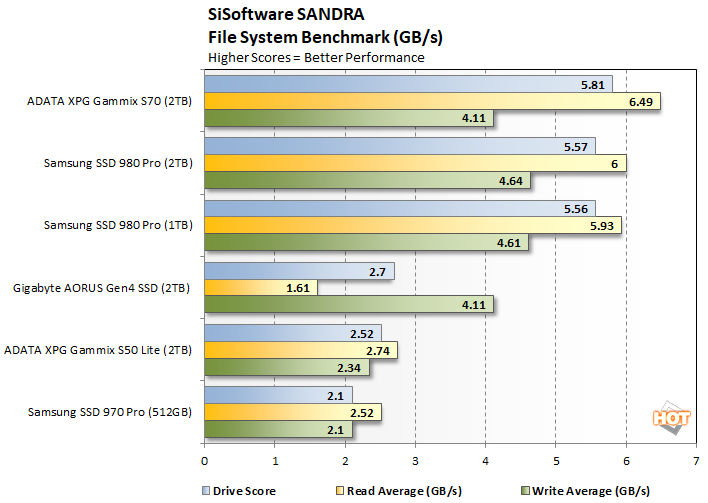 The 2TB Samsung SSD 980 Pro once again performs right on par with the 1TB model. And although it lands in the second place position overall, note it actually had the best write performance in this benchmark. The ADATA drive takes the pole position due to its stronger read score. 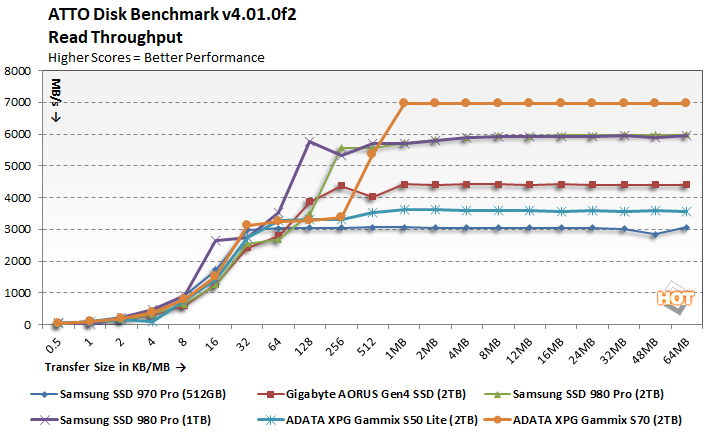 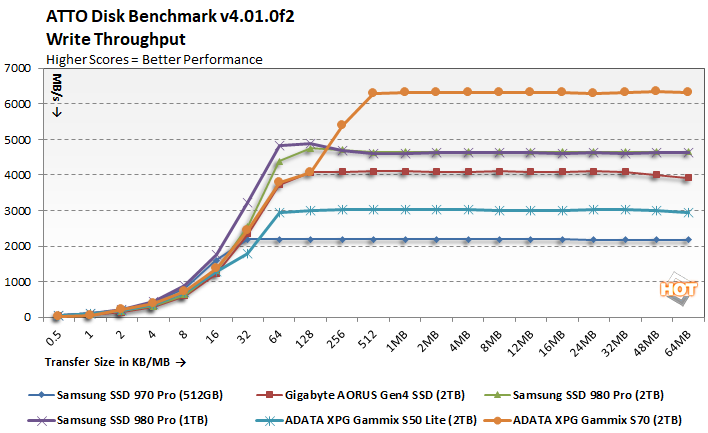 In ATTO's read and write bandwidth tests, Samsung 1TB SSD 980 Pro drives offers slightly better read and write performance at transfer sizes below the 64K - 128K range, but things level off and the two drives perform similarly with larger transfers. Overall, the SSD 980 Pro's performance is strong, but the ADATA S70 with its InnoGrit controller and Micron NAND takes the lead in sequentials. 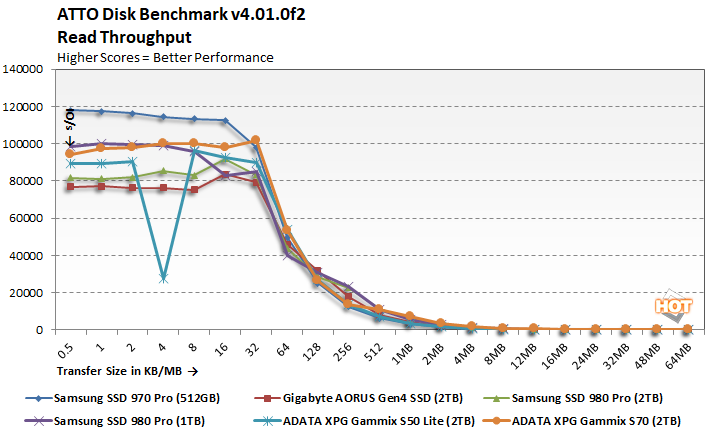 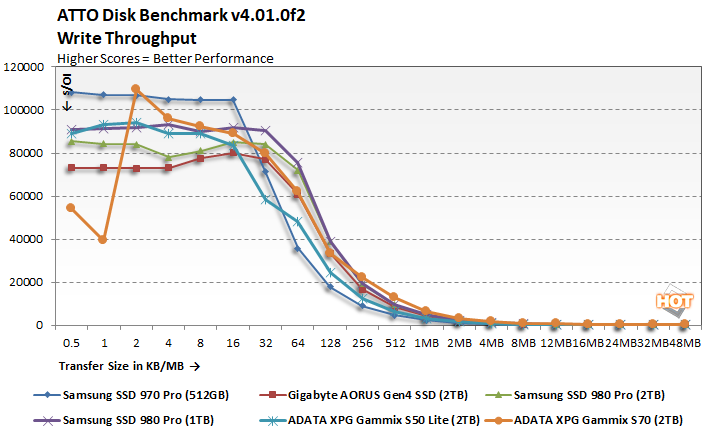 The 2TB Samsung SSD 980 Pro's IOPS also trail the 1TB model at the smaller transfer sizes, and land about in the middle of the pack. Once again though, performance between the 1TB and 2TB model equalizes with larger transfers. 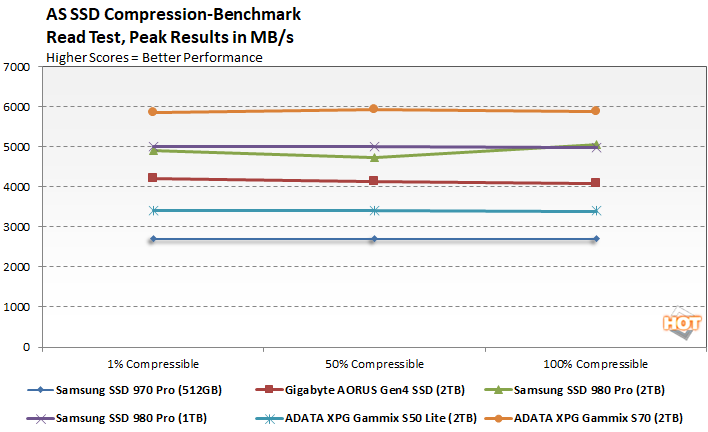 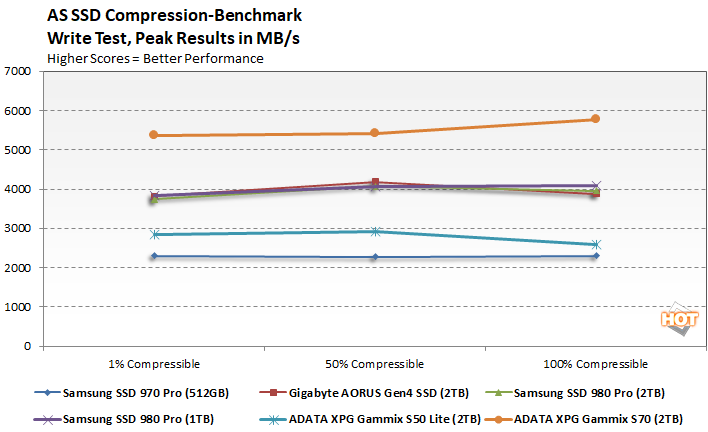 The compressibility of the data being transferred across the drives has minimal impact on performance, The 2TB Samsung SSD 980 Pro showed slightly larger variances than the 1TB drive, but they effectively finished right on top of each other here, with the ADATA XPG S70 taking the overall lead yet again.