Samsung has long dreamed of the modern smartphone extending its usefulness to more PC-like use cases, such as functions you might otherwise drive on a desktop or laptop. To that end, the company has poured resources into DeX, a Chrome OS-like interface that works remarkably well with a traditional keyboard and mouse. Last fall, we really dug this feature as part of the Samsung Galaxy Tab S7 Plus, where DeX added tons of utility to an otherwise-barren Android tablet landscape. DeX isn't just for tablets, though; the Galaxy S phone lineup has long supported it. A new feature of Samsung's new Galaxy S21 series of devices should make running in DeX mode much easier via wireless connectivity.

We've taken DeX on the Samsung Galaxy S21 for a spin, and the company has baked a boatload of excellent features into the software. There's basic screen casting functionality built right into the device, although Samsung's documentations says that it is limited to 1080p in wireless mode. USB Type-C to HDMI cables already allowed that functionality on older devices, but the S21 cuts the cord and handles it all via Miracast. Once connected to a TV, the interface shifts to a keyboard and mouse friendly mode and we can use the device directly on the display. The only requirement is that the two devices are on the same local network. 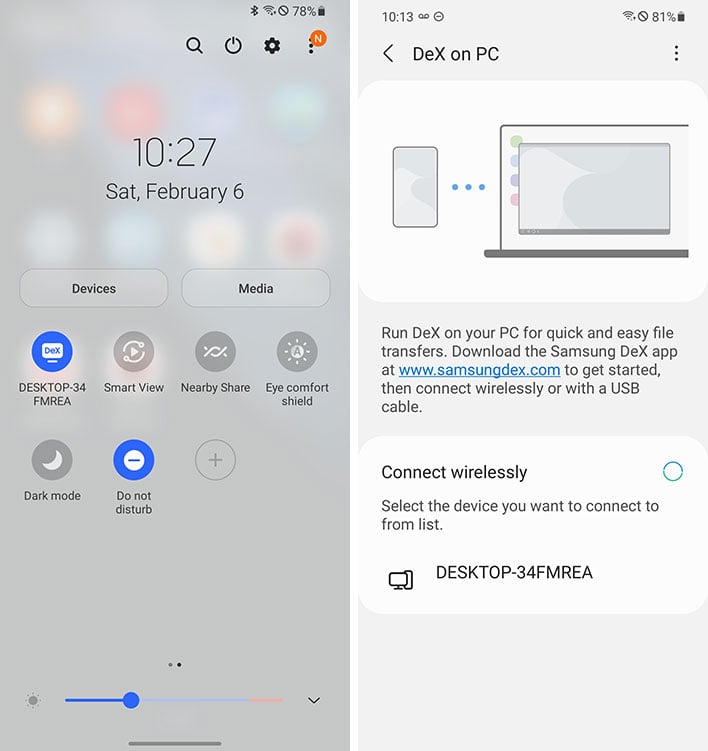 However, the real fun began once we installed the DeX software on a Windows PC. To connect wirelessly, we just had to pick our desktop from the phone, and then the phone slips into DeX mode and projects its interface to the PC in a window. In wireless mode, Samsung limits DeX to 1080p, but that's plenty for most tasks. Dialing from the PC was as simple as clicking the phone icon and entering the number. Depending on how users want to actually talk on the phone, they may need to pick it up eventually to use it as a handset, but a Bluetooth headset would make using the phone a totally hands-free experience. 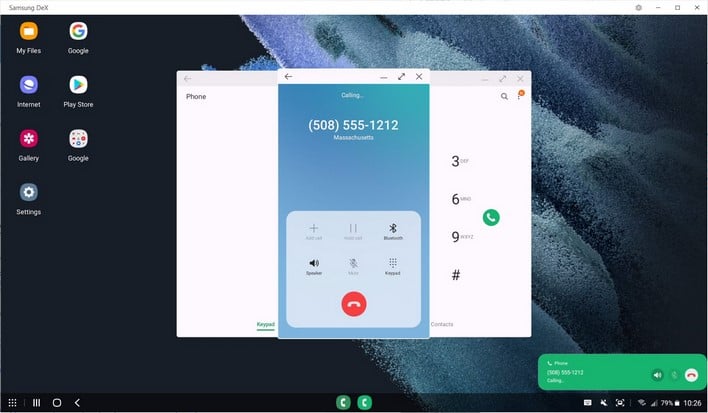 Beyond using the phone as a PC, Samsung DeX software for Windows also allows wireless file transfers using a simple drag-and-drop interface. We pulled images from our Galaxy S21 and documents from a connected OneDrive account just by browsing in the phone's camera roll and file browser apps, and then dragging them to the desktop of the Windows PC. This is much simpler than picking up the phone to Air Drop files from an iPhone to a Mac, because in the Apple ecosystem you either have to actually touch the phone or pay for iCloud storage, and then hope that the phone had synced files and photos to the cloud. By contrast, Samsung's wireless DeX connectivity in the Galaxy S21 means that the phone can be in the next room and nothing stopped us from grabbing pictures from the device.


Samsung has really always seen DeX as a business tool. Not having to worry about whether a file has been transferred from a phone to a laptop (or vice versa) and always just being able to run everything from the phone should be a pretty attractive tool to traveling business folks. For instance, having a PowerPoint presentation in OneDrive on a phone and casting to the screen is one scenario. The company has also told us in the past that it believes most people who work in an office can do their entire jobs from a single device, and as cloud-connected services continue to dominate the services landscape, it's easy to see.

Stay tuned, as we have a full review of the Galaxy S21 on the way. DeX is just one aspect of this device, and wireless connectivity gives it an advantage over the previous-generation Galaxy S20 family from 2020.