Next up we ran the Compression Benchmark built-into AS SSD, an SSD specific benchmark developed by Alex Intelligent Software. This test is interesting because it uses a mix of compressible and non-compressible data and outputs both Read and Write throughput of the drive. We only graphed a small fraction of the data (1% compressible, 50% compressible, and 100% compressible), but the trend is representative of the benchmark’s complete results. 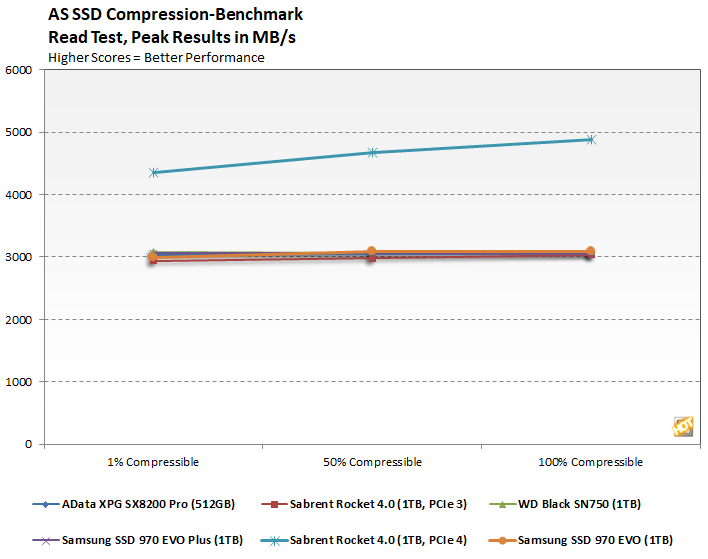 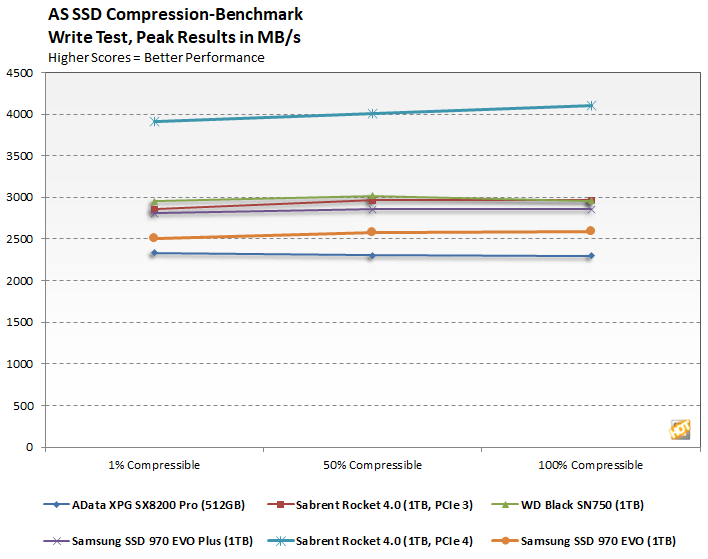 However, once this drive was set free with all the extra bandwidth, the drive shot up to figures fairly close to its peak read and write values. Obviously, the more compressible a data set is, the less that actually has to get written to the drive, but even then, the test could write the 1% compressible data at nearly 3.9 GB per second and read it back well above 4 GB/s. 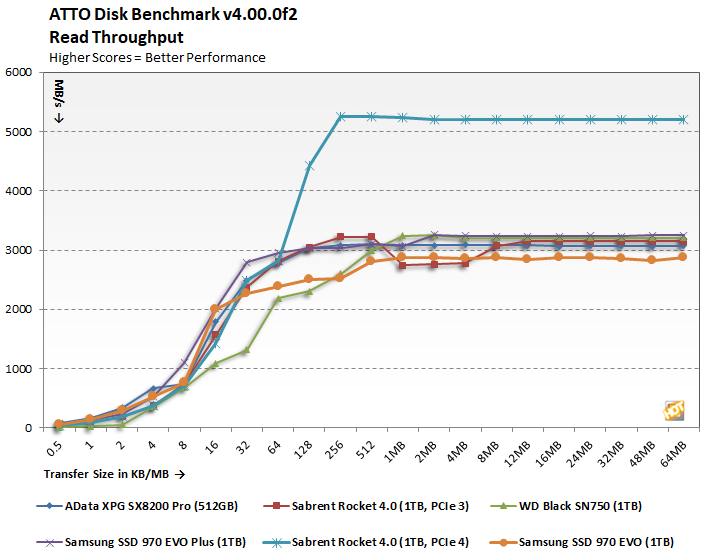 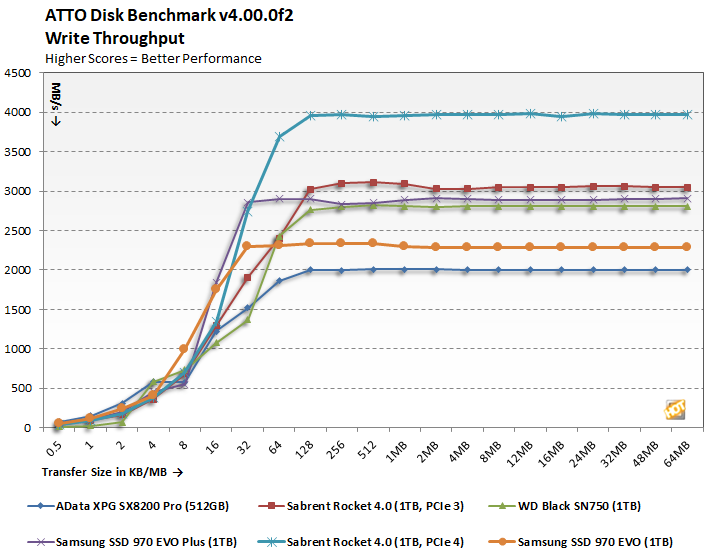 Rather than spit out a single read and write speed, we like that ATTO tests a range of read and write block sizes to show us how drives handle each transaction. This gives us an idea of where the drive will start to maximize its performance on larger files. For instance, most of our drives—but not the Rocket NVMe 4.0—start to approach their peak read and write speeds at the 32kB mark. The Rocket along with the WD Black SN750 don't ramp up all the way until they hit 64 kB transfers. That's not bad, it just means that the SSD's controller has NAND hooked up to more channels than those that peak sooner.

With PCIe 4.0, smaller files don't transfer any faster than bigger ones, because it's more about IOPS throughput than bandwidth. Once the file sizes hit 128 kilobytes, the Rocket NVMe 4.0 hits ludicrous speed. This, as much as anything, should help you figure out if you should be interested in a PCIe 4.0 drive. If you're moving tons small files, that extra bandwidth means very little. On the other hand, folks that move tons of large files around would benefit much more greatly.

EFD Software describes HD Tune on the company's website as such: "HD Tune is a hard disk utility with many functions. It can be used to measure the drive's performance, scan for errors, check the health status (S.M.A.R.T.), securely erase all data and much more." The latest version of the benchmark added temperature statistics and improved support for SSDs, among a few other updates and fixes. 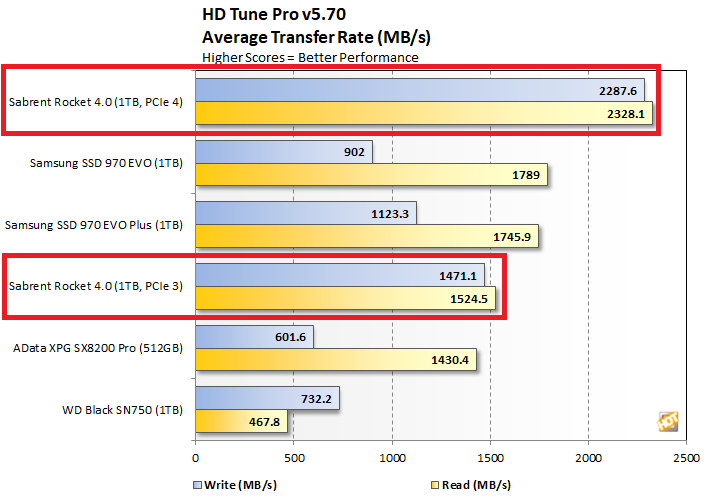 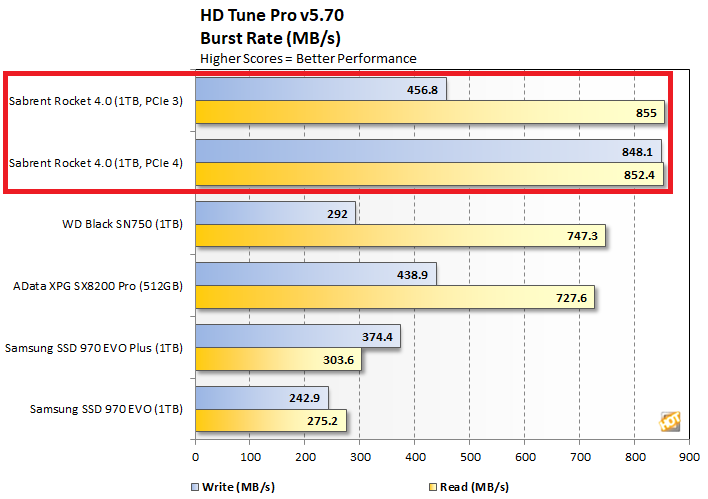 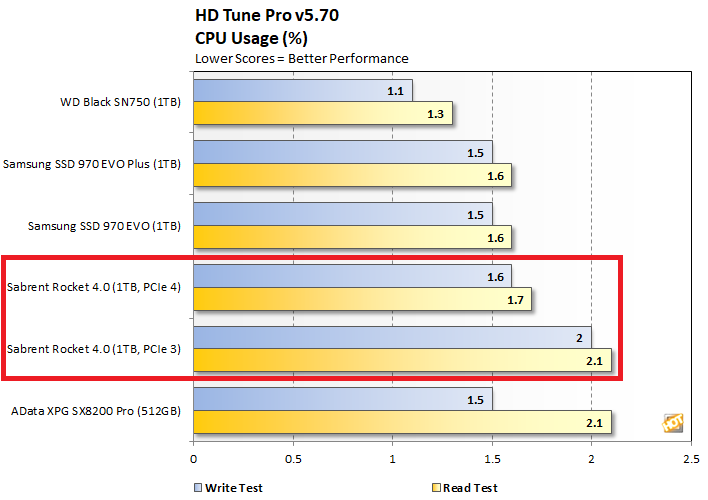 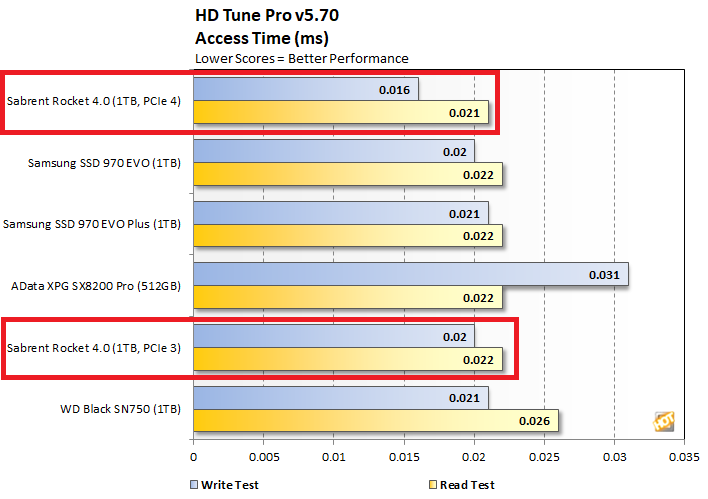 Once again, most of the tests here are sequential reads and writes, and the Rocket NVMe 4.0 does pretty well when connected via PCIe 4.0. The most pleasantly surprising result is the access latency test, where on PCIe 4 the drive turned around its score in IOMeter. CPU usage wasn't the very lowest among our drives, but none of these storage devices put much strain on a modern CPU. As far as the rest of the tests go, SSDs rarely max out their theoretical sequential read and write performance here, so it's no surprise that the Sabrent drive doesn't, either. Overall, this is a pretty solid result, but not an earth-shaking paradigm shift. PCIe 4 definitely has its uses, but they're not fully realized here.


CrystalDiskMark is a synthetic benchmark that tests both sequential and random small and mid-sized file transfers using incompressible data. It provides a quick look at best and worst case scenarios with regard to SSD performance, best case being larger sequential transfers and worse case being small, random transfers. 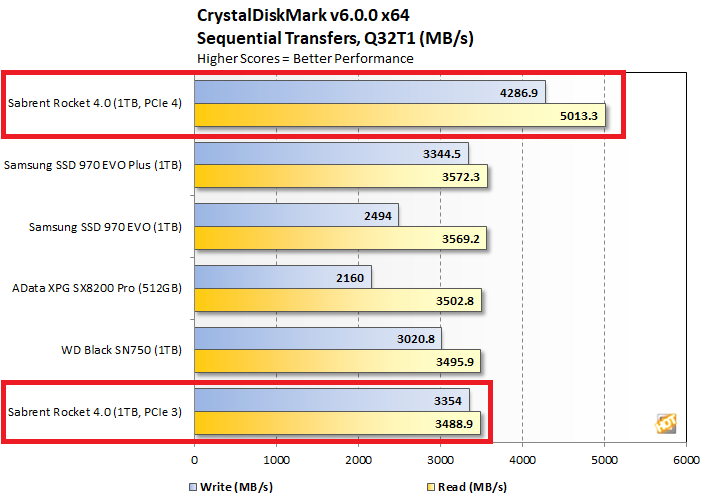 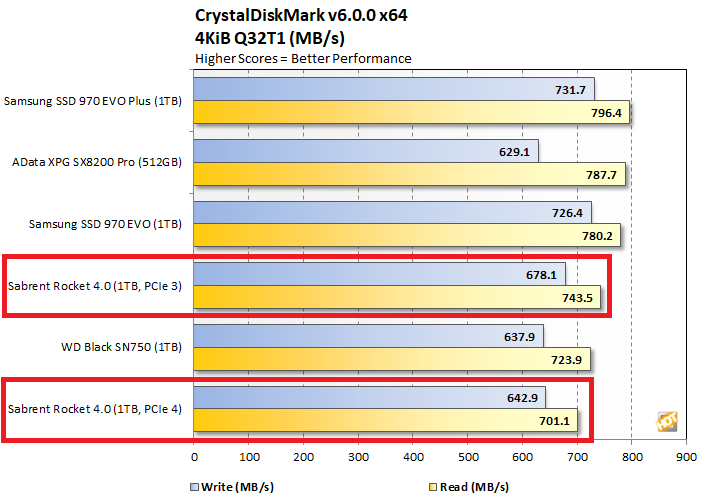 In the Q32T1 tests (which means the test maintains a queue depth of 32, with just one thread doing all the work), the Sabrent drive pulls up the rear while on PCIe 3, but all of these results are pretty tight, so we wouldn't read too much into it. On the other hand, PCIe 4 once again lets the drive stretch its legs in a totally sequential read and write environment. This backs up what we saw earlier, but doesn't really give us anything new. On the other hand, 4kB read and write performance is new, and the Rocket NVMe 4.0 does about the same as any other drive. PCIe 4, as we saw with small transfers in ATTO, doesn't really do anything, and actually kind of hurts performance. It's still tough to take away too much from a total platform change. 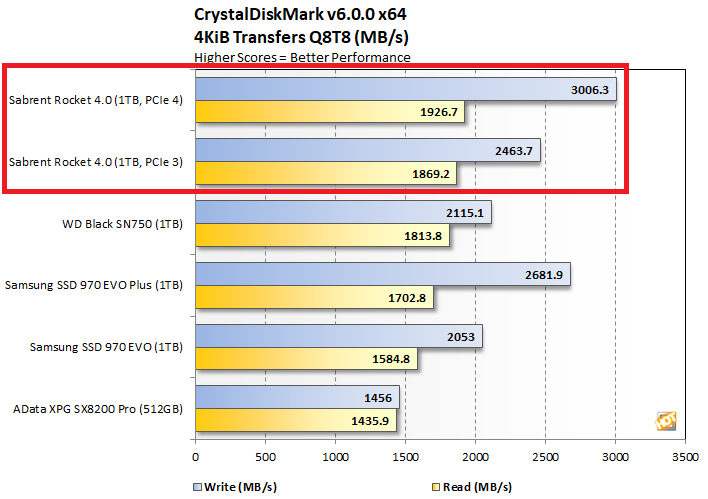 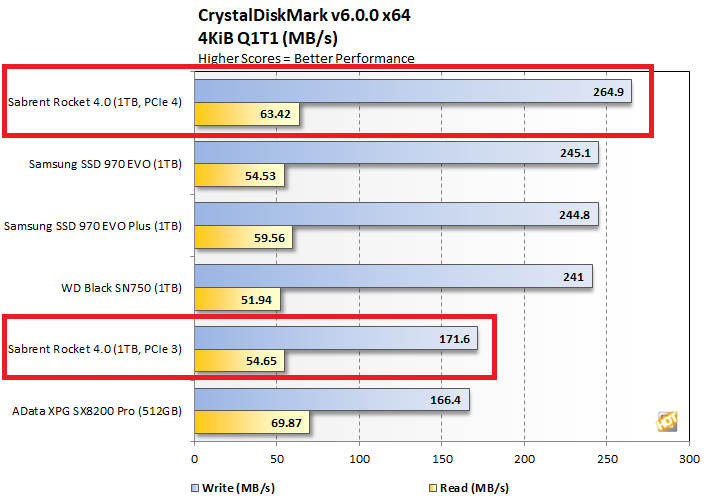 The remaining 4kB tests use varying queue depths and available threads to process information. Here, we do start to see the additional bandwidth (or maybe the extra processing horsepower of our Ryzen) start to pay off as the PCIe 4 result is the top of our chart. The apples-to-apples comparison on PCIe 3 is a bit less stellar, but still respectable. We don't see a reason to spend more on this drive just to saddle it with older PCI Express technology, but if you're buying and SSD today and plan to carry it over in a future system upgrade, these results show how it will perform.
PREV PAGE NEXT PAGE