It's been a while since we covered CPU market share figures for German eTailer Mindfactory, but the numbers are in for January and February, and AMD once again is dominating the market. AMD saw an uptick in adoption when it introduced its first- and second-generation Ryzen processors, but the third-generation Ryzen 3000 family has been absolutely crushing it with respect to sales performance.

Mindfactory's numbers feature a mixture of January and February processor sales. The pie chart below shows CPU market share figures for January, and reveal that AMD garnered a whopping 85 percent of the market. That left Intel scraping by with just 15 percent of the CPU market in Germany. Looking at CPU architectures, Matisse (Zen 2) commanded 46 percent of the market, with Pinnacle Ridge (Zen+) coming in second with 23 percent. 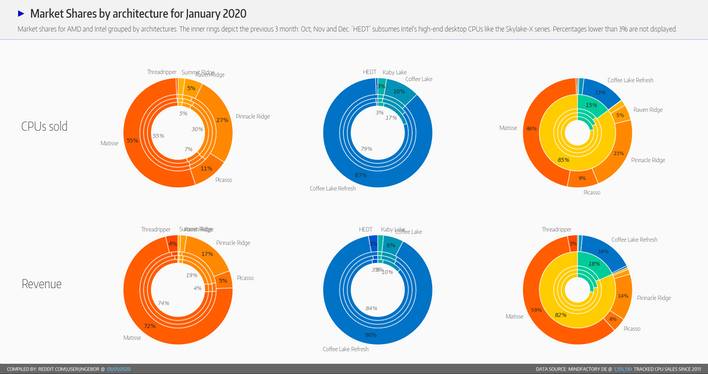 The Coffee Lake Refresh made up the overwhelming majority of Intel processors sold, with 13 percent of the overall market.

Moving to the month of February, AMD further increased its share of the market to 87 percent compared to just 13 percent for Intel. Of all processors sold during February, the Ryzen 5 3600 took the lion's share of the market, with the Ryzen 7 3700X taking second place. When it comes to Intel's processors, the best-selling SKU was the Core i7 9700K.

AMD clearly did its homework with the Ryzen 3000 family (including Ryzen Threadripper 3000) and its partnership with TSMC has allowed the company to grab the process node lead over Intel. Intel is looking to fight back in the desktop market though with its upcoming Comet Lake-S processors, which are likely to be released at any moment.

However, Comet Lake-S is still built on Intel's aging 14nm process node, and there have been some early concerns that thermals for the processors are getting out of hand. Offering up to 10 cores (Core i9-10900K), Comet Lake-S will be Intel's best chance yet at countering Ryzen 3000 which is available in even more potent 12-core (Ryzen 9 3900X) and 16-core (Ryzen 9 3950X) configurations

With that being said, whatever Intel brings to the table with Comet Lake-S will be followed up in short order by AMD's Zen 3-based, 7nm+ Ryzen 4000 desktop processor family. These processors are expected to launch in the second half of 2020.