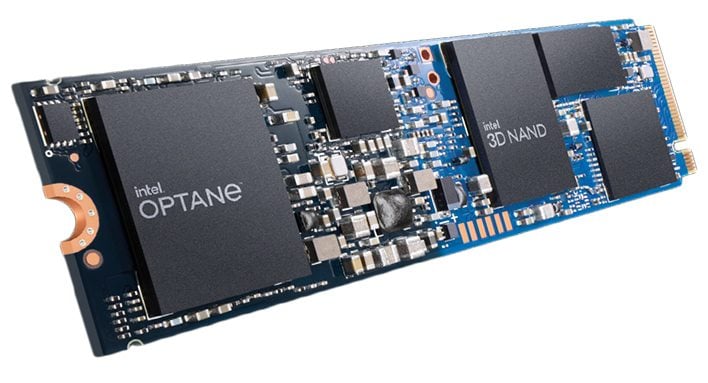 Optane media and NAND flash memory are both used for storage, but the two technologies behave differently and have different cost structures. Optane Memory can be significantly faster than NAND with small transfers, especially at low queue depths, but NAND can currently scale to higher capacities at much lower costs. Pairing Optane Memory with QLC 3D NAND on a single M.2 drive can offer the best of both worlds under certain conditions, without breaking the bank. 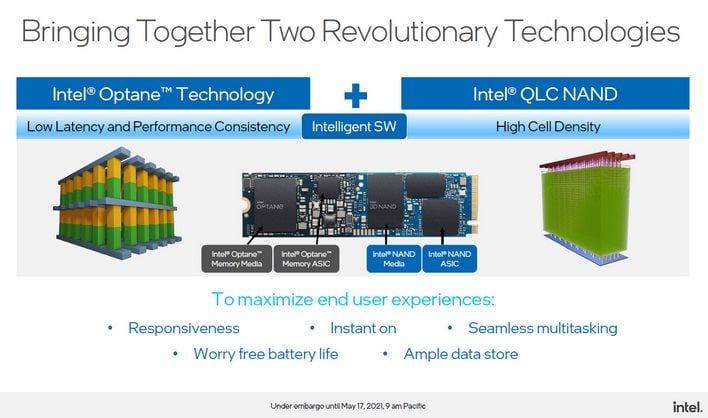 Unlike standalone Optane-branded SSDs, Intel Optane Memory is designed to accelerate a slower storage volume on compatible systems, to improve transfer speeds and reduce latency. Intel Optane Memory products, and their associated software, are designed to cache the most frequently accessed bits of data to the Optane media, which can significantly increase perceived performance and improve responsiveness. The implementation is similar to Intel’s original Smart Response Technology, which debuted all the way back when the SSD 311 series of SATA-based solid state drives was released, but it's now integrated into Intel's Rapid Storage Technology (RST) software and driver suite.

Intel Optane Memory is a superior solution though, due to its much higher performance and consistency at low queue depths. Intel Smart Response Technology is a caching mechanism that uses a solid state drive like Intel Optane Memory, to enhance overall system performance and simplify the drive configuration presented to the end-user. The cache can be linked to the boot drive in a system, regardless of the capacity or the drive type. In the case of the Optane Memory H20, the Optane media cache is paired to a QLC-based SSD – it just happens to all reside on a single PCB.


What Is Intel Optane Memory Technology?

With the Optane Memory H20, the Optane Media is used as a high-speed repository for the most commonly accessed data blocks (not necessarily complete files) while the QLC NAND is configured as the main boot and storage volume. Usage patterns on the QLC SSD are monitored in real time and the most frequently accessed bits are copied from it to the Optane Memory.

Because the Optane Memory is used as a cache, when enabled, it is not presented to the end-user as a separate volume in Intel’s driver control panel. It works transparently in the background, which can help less-savvy users not accustomed to managing multiple drives. When the Optane Memory caching utility is disabled in Intel’s driver control panel, however, the H20 will look like two separate volumes to the OS.

We’ve got the Intel Optane Memory H20’s main features and specifications outlined below. Take a look and then we’ll explain how it is all set up and demonstrate just how much it can accelerate the performance of a system... 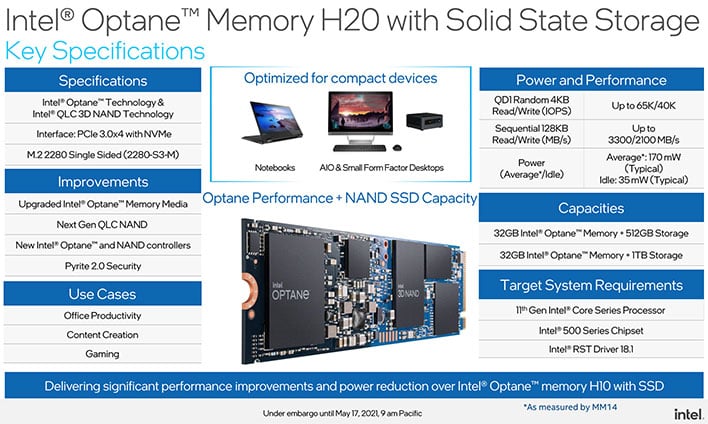 Intel's Optane Memory H20 connects to a system over a PCIe x4 gen 3 interface, but the lanes are bifurcated between the Optane Memory media and controller and QLC NAND. In essence, there are two separate drives on since PCB, each with their own dedicated controller and media; two PCIe lanes are used for the Intel Optane Memory and two for the QLC-based SSD. That means, under worst-case conditions with uncached data, the H20 could perform like standalone QLC-based SSD with a two-lane PCI Express interface. Conversely, when the Optane Memory and NAND are accessed simultaneously, transfers speed will look much better. Intel rates the drive for peak transfers of 3.3GB/s (reads) and 2.1GB/s (writes). We should also mention that Pyrite 2.0 is supported as well, for the security conscious among you.

There are a few things to note in regards to Intel Optane Memory compatibility. Optane Memory will work only in Windows 10 64-bit systems with Intel’s latest processors and 500 series chipsets. The motherboard’s BIOS must also have the necessary hooks built-in for Intel Optane Memory to function properly, and it has to be able to handle the PCIe lane bifurcation as well. Because the H20 is destined to be an OEM part, Intel’s system partners will obviously leverage the drives only in systems with the necessary hooks available. 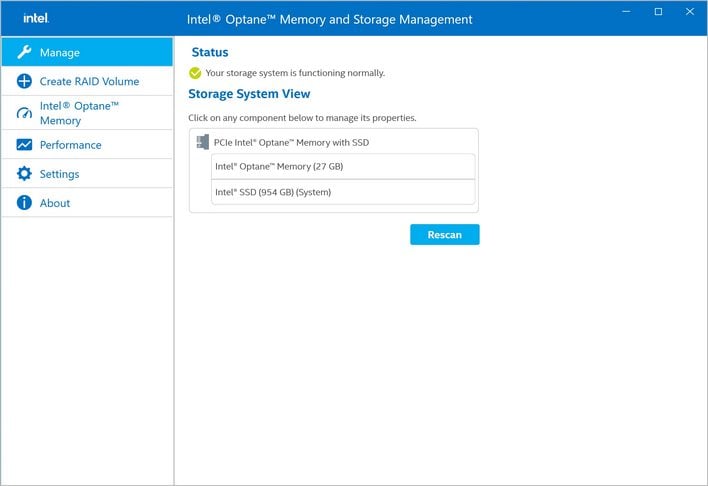 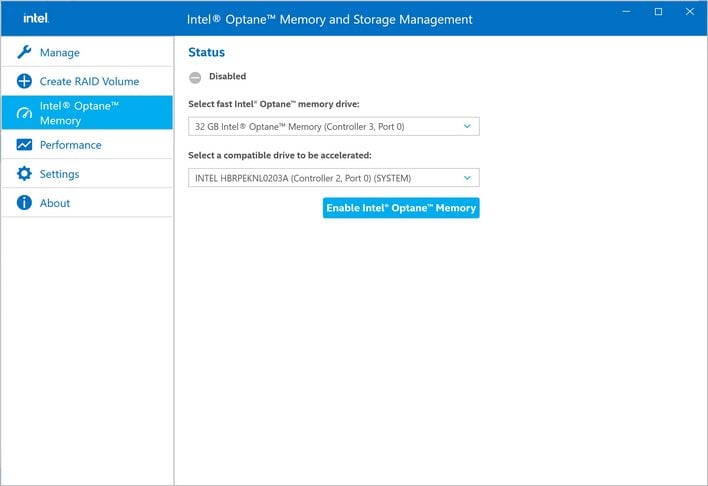 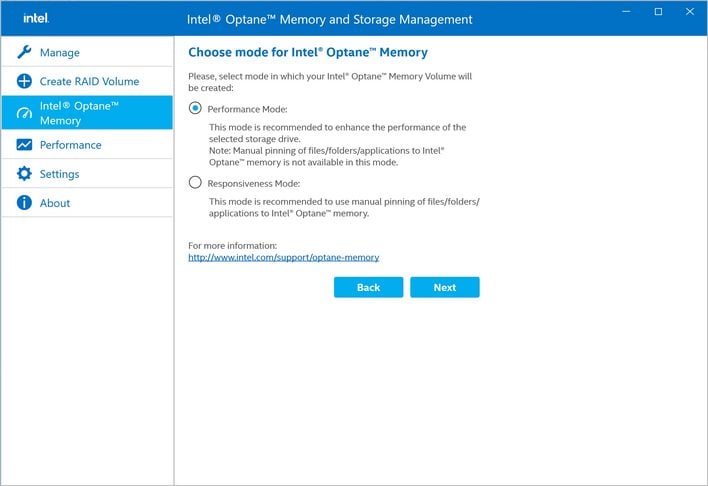 Intel’s Rapid Storage Technology (RST) software makes it easy to configure and maintain the H20. The control panels are accessible via the Start menu or from a system tray shortcut that gets installed along with the driver suite. Inside the application interface there are multiple buttons at the left – Manage, Create RAID Volume, Intel Optane Memory, Performance, Settings, and About. The Optane Memory menu has simple Enable / Disable toggles to engage the Optane Memory cache. 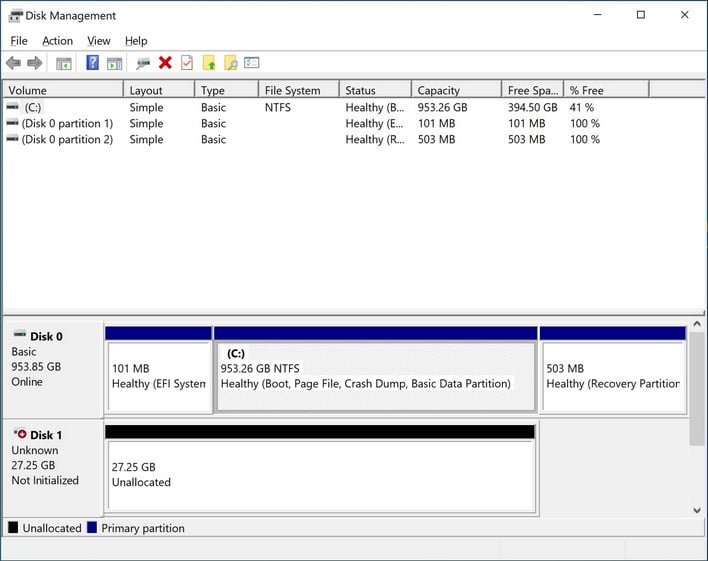 When the technology is enabled (or disabled) the application runs through a few routines to prepare the drive and then prompts the end user to restart the system. And that's really it. Once enabled, the H20’s Optane Memory is completely transparent to the end user and "just works" in the background to cache data based on usage patterns. When the caching mechanism is disabled though, the H20 will actually show up as two separate drives in the Disk Management menu, as shown above.

Due to the fact that the Intel Optane Memory H20 is destined to be an OEM part and won’t be available as a standalone retail purchase, we were seeded with an HP Spectre with the necessary BIOS and software installed to test the drive. The H20 numbers posted in this review were not generated on our in-house storage test-bed, so they are not necessarily comparable to any of our previous storage-related review data. 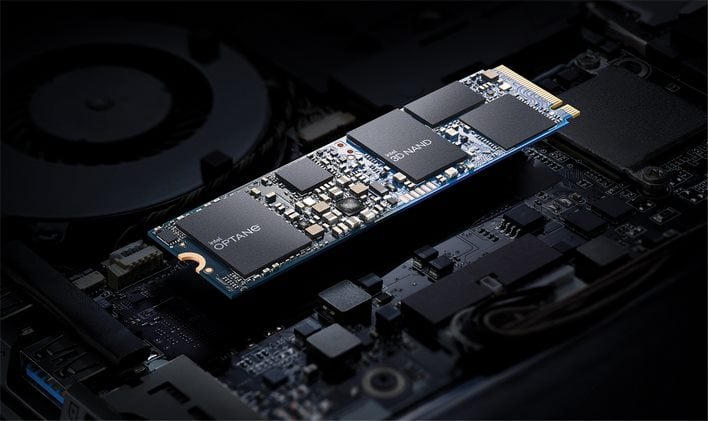 That said, the HP Spectre machine we were set up with was fairly high-end. The system featured an 11th Gen Core i7-1165G7 quad-core / eight-thread Tiger Lake processor, with 16GB of RAM. For reference purposes, we compared the performance of the Optane Memory H20 – with and without Intel’s caching algorithm enabled – to a couple of Intel standalone SSDs, just to give you all a frame of reference.

We began our testing with some common benchmarks to set some baseline expectations. We’ve got multiple numbers in each chart, some from the standard SSDs and two for the Optane Memory H20 -- one with Optane Memory caching enabled, and another with it disabled. The reason we wanted to show you the performance of the H20 with its Optane Memory disabled is to present the “worst” case scenario, where nothing is cached on the Optane media.

Let’s start with the ATTO Disk Benchmark. ATTO is a "quick and dirty" type of disk benchmark that measures transfer speeds across a specific volume length. It measures raw transfer rates for both reads and writes and graphs them out in an easily interpreted chart. ATTO's workloads are sequential in nature and measure bandwidth and IOPS, rather than access latency, etc. 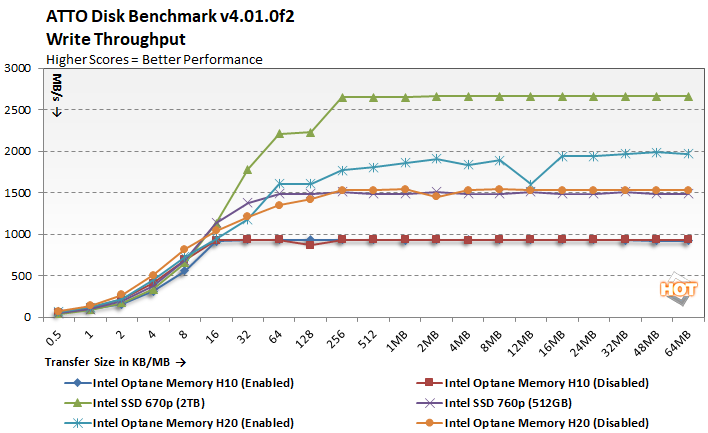 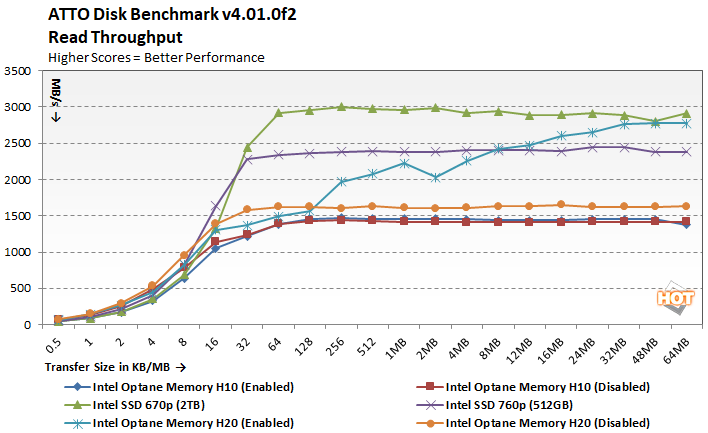 Intel's specifications claim up to 3,300MB/s reads and 2,100MB/s writes for the Optane Memory H20, and that's just about what we saw with the larger transfer sizes. Note that with the Optane cache enabled, peak performance is much better than with it disabled and the drive hangs with the Intel SSD 760p. 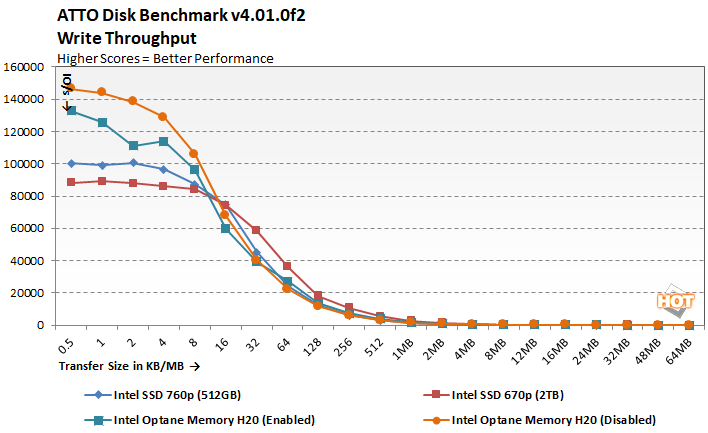 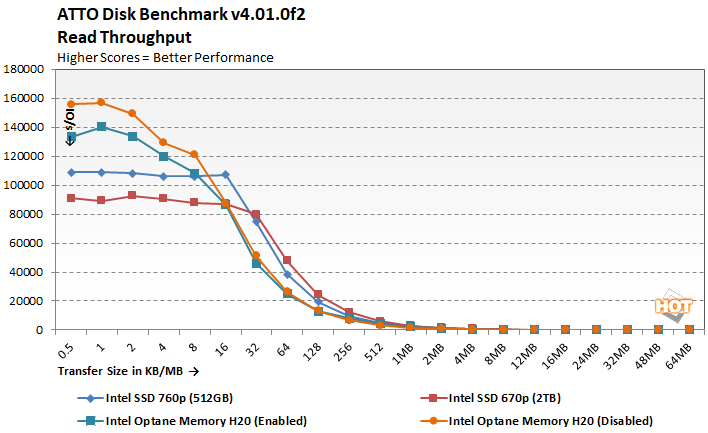 IOPS according to ATTO showed the H20 outperforming the standalone SSDs with the lowest transfer sizes. Enabling the Optane Memory cache did pull performance down somewhat here, but it is still plenty high for the consumer-class workloads the drive targets. 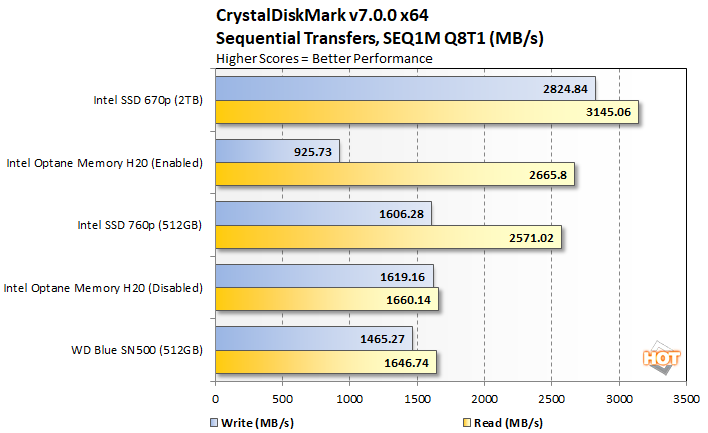 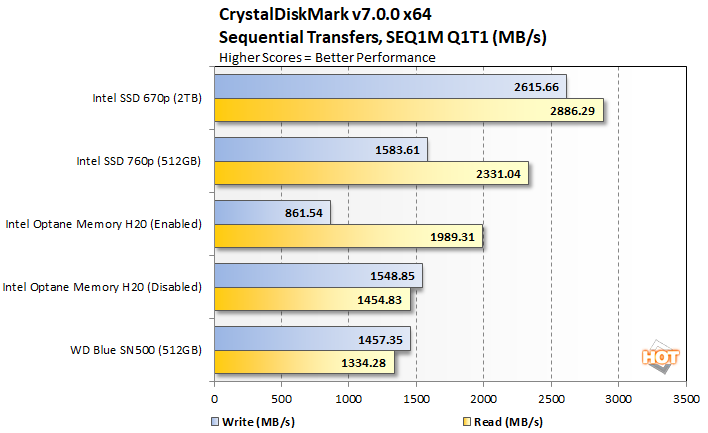 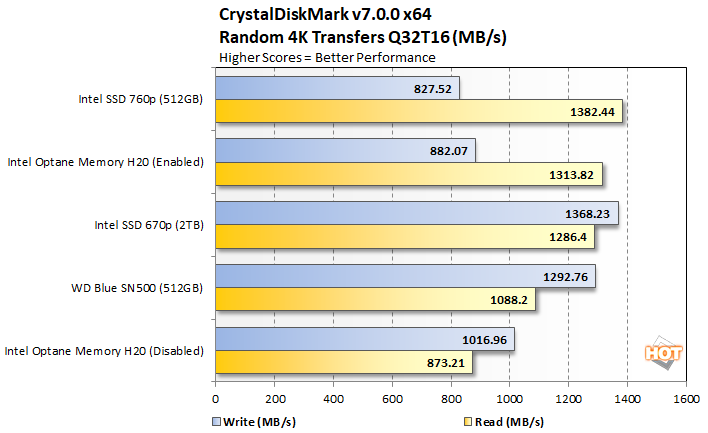 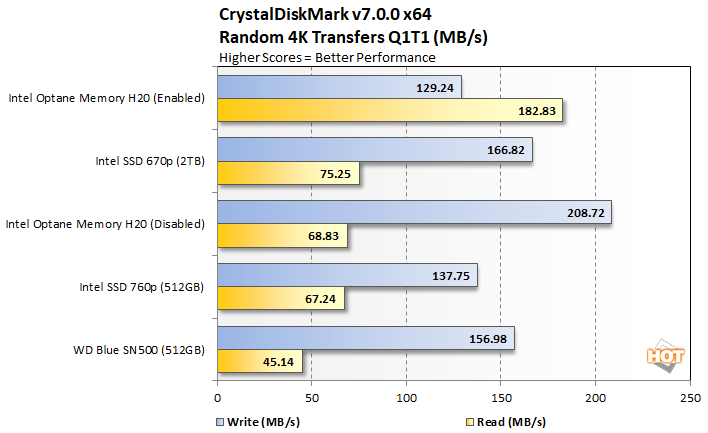 There are a few things to note in these CrystalDiskMark results. First, notice that write speeds actually go down with the Optane Memory cache enabled. Reads, however, are boosted significantly. In the 4K transfer tests, writes also go down, but reads are much, much better. In the all important 4K Q1T1 tests -- which is most similar to the vast majority of consumer-class workloads -- the Optane Memory H20 is more than twice as fast in terms of 4K reads than the standard SSDs.