We also spent a little time overclocking the new GeForce RTX 3070 FE to see what kind of additional performance we could wring from the card. Before we get to our results, though, we should probably provide a little background...

Overclocking Ampere And The RTX 3070

Ampere-based GeForce RTX 30-series cards like the RTX 3070 FE feature GPU Boost just like previous-gen GeForces. GPU Boost scales frequencies and voltages up and down based on the GPU's workload and environmental conditions at the time, within predetermined power and thermal limits. Should a temperature or power limit be reached, GPU Boost will drop down to the previous boost frequency/voltage stepping, in an attempt to bring power and temperatures down gradually and not cause any significant performance swings. 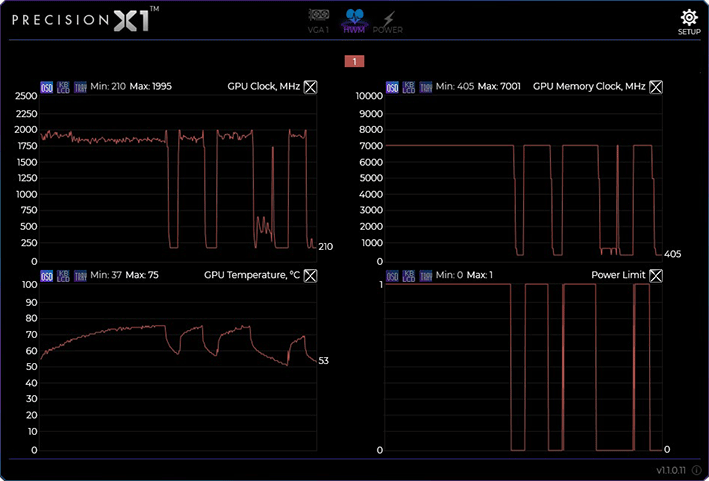 As we've mentioned in some of our previous coverage, NVIDIA has segmented the core and memory power rails. It has also significantly tweaked and tuned interfaces on RTX 30-series cards to optimize signal integrity and power delivery to the GPU and GDDR6 memory, which should help with overclocking. With that said, like previous-gen Turing-based cards, the GeForce RTX 30-series is still power limited to prevent damage and ensure longevity, and that power limit is typically what'll determine a card's overclocking headroom. 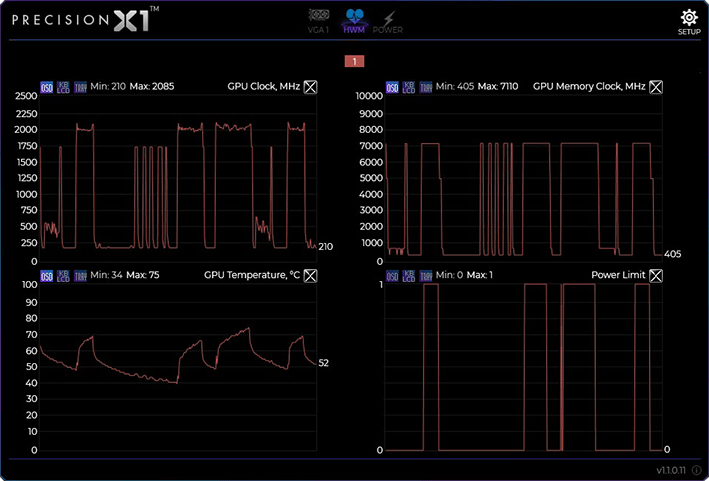 NVIDIA offers an automatic overclocking scanner tool, should users want to generate a specifically tailored frequency and voltage curve for their card. But, you can also overclock manually, which is what we did. In lieu of using the NVIDIA Scanner, we kept things simple and used the frequency and voltage offsets, and the power and temperature target sliders, available in EVGA's Precision X1 utility, to manually push the card well beyond its stock specifications.

First, we cranked up the temperature and power targets, and pushed the voltage up, then we increased the GPU and memory clock offsets until the test system was no longer stable, showed on-screen artifacts, or performance peaked due to hitting the power limit. With the GeForce RTX 3070 FE, the power target can be increased by 9%, the temperature target from 83°C to 90°C, and the GPU voltage can be raised by up to .1v. 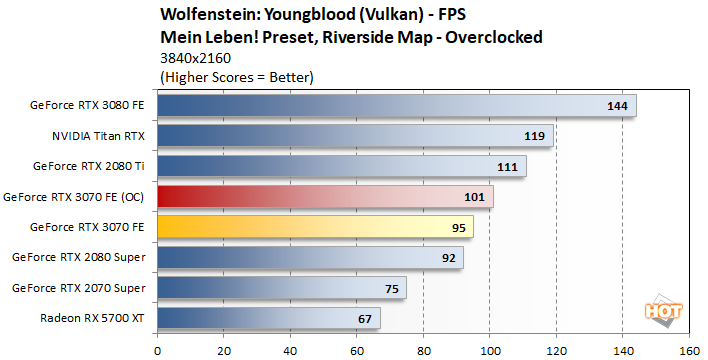 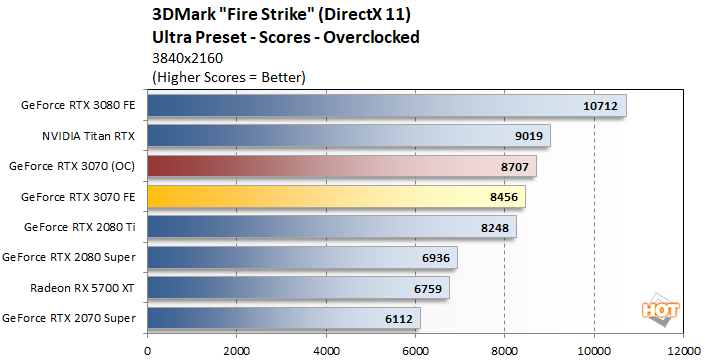 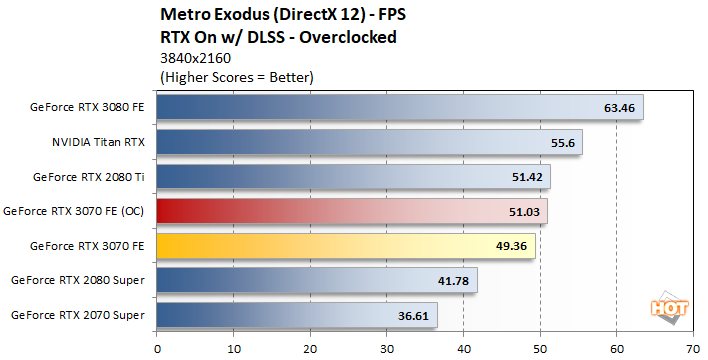 While we had our card overclocked, we re-ran a few benchmarks and were able to take its GPU Boost frequency to nearly 2.1GHz, with an effective 7.11GHz memory clock. We saw some nice performance increases, which put the 3070 FE right in-line with the 2080 Ti in a couple of tests where it previously trailed. In the 3DMark test though, the GeForce RTX 3070 FE extended its lead over the RTX 2080 Ti. 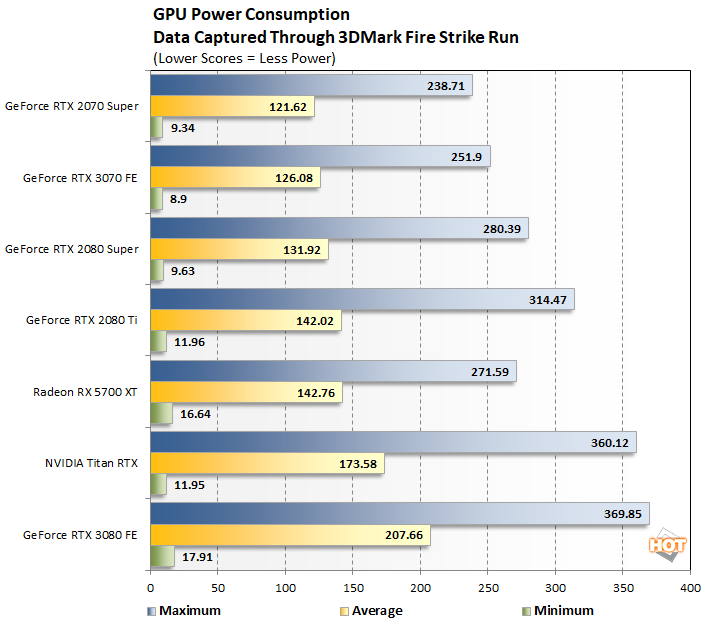 The power data tells an interesting story. The Ampere-based GeForce RTX 3070 FE consumed only slightly more average and maximum power than the GeForce RTX 2070 Super, despite offering significantly higher performance across the board. The RTX 3070 FE also consumed much less power the the GeForce RTX 2080 Ti, which finished most tests in the same ballpark. These numbers speak very well to the GA104's power efficiency and should give NVIDIA some wiggle-room should the company need / want to introduce a 3070 Super or Ti variant at some point.

The GeForce RTX 3070 FE's absolute power consumption may be higher than its previous-gen namesake, but even with its increased power requirements, heat and noise will be non-issues for most users. 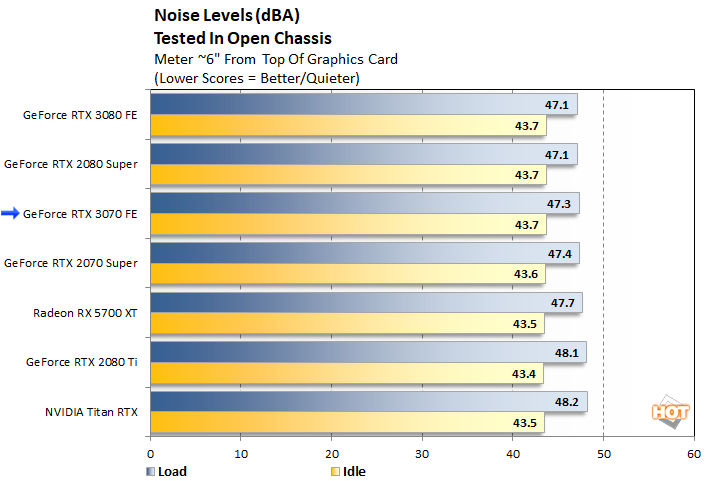 In our real-world setup (we tested the GPU inside a chassis), our test rig with the RTX 3070 FE output sound pressure levels that were similar to the RTX 2070 Super. We measured the sound pressure about 6" away from the top of the GPU, with the side-panel removed from the chassis. The test system has 3 additional fans -- 1 x 120mm exhaust fan, 1 x 120mm fan on the CPU heatsink, and another 140mm fan in the PSU. Overall, the system is relatively quiet, though its fans do drown out most GPUs, at least until they are placed under a sustained load for an extended period. 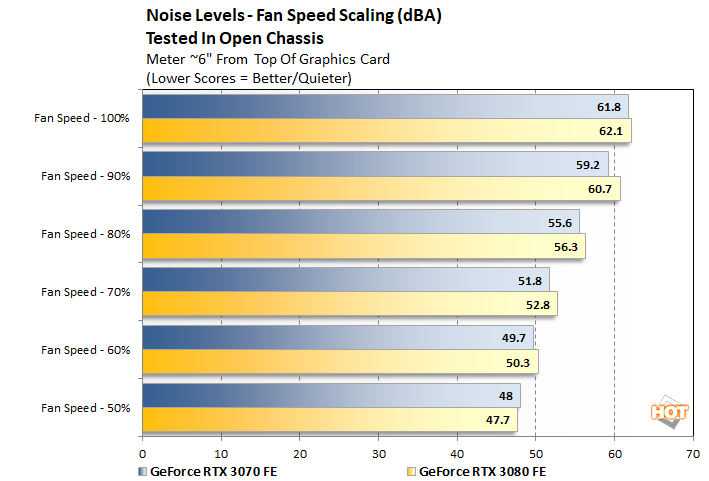 By default, the GeForce RTX 3070 FE's cooling fans will spin up to about 30 - 40% of their maximum capacity in typical real-world use, which was not really audible over our test systems case / CPU fans. We did, however, manually crank up the fan speeds to see just how loud the card could theoretically get if temperatures spiraled out of control (which is highly unlikely). At maximum speed (for both fans), our sound meter measured a peak just below 62dBa.  Note, however, that even while heavily overclocked, our GPU temp never exceeded 75°C and the fan speed maxed out in the mid-40% range, which again results in noise levels that are below system fan thresholds. 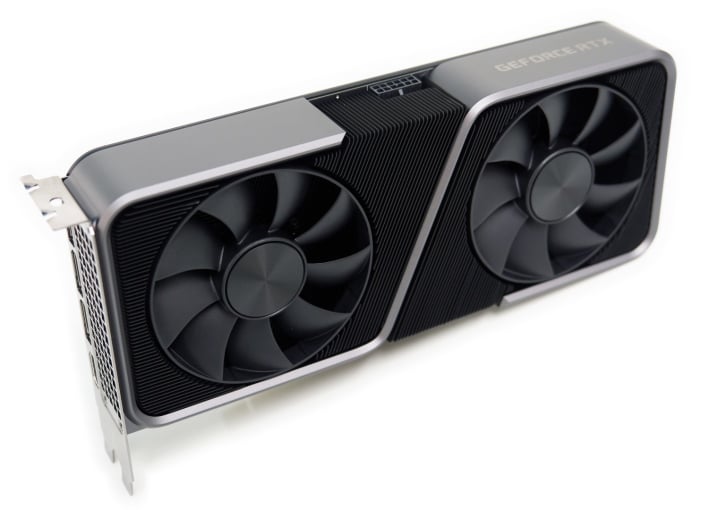 When NVIDIA initially announced the GeForce RTX 3070, it made some bold claims regarding performance that got gamers and enthusiasts really excited for the card. 2080 Ti-like performance for about $500 would represent an incredibly strong value in light of the GeForce RTX 20-series’ price structure. And as you saw on the previous pages, NVIDIA delivered. Over and above the strong performance per dollar, however, the GeForce RTX 3070 also has a relatively small form factor, it runs cool and quiet, it’s an easy overclocker (albeit power limited), and it's energy efficient as well. The GeForce RTX 3070 ticks all of the right boxes. The only potential gotcha is the card’s 8GB of memory. For the vast majority of games available today, 8GB should be adequate with maximum image quality, even at high resolutions, but moving forward that 8GB of memory may require some image quality concessions to maintain smooth framerates.

As it stands today though, the GeForce RTX 3070 is the GPU to buy if you’re in the market for a graphics card in the $500 price range. It offers killer performance per dollar and an unmatched feature set. This one is an easy Editor’s Choice winner.