We also ran a handful of graphics and game tests on the Core i9-11980HK-powered Intel-branded notebook. Keep in mind looking at the results on this page, that system is packing a GeForce RTX 3060 65W GPU, which is not NVIDIA's top-end power configuration for the 3060... 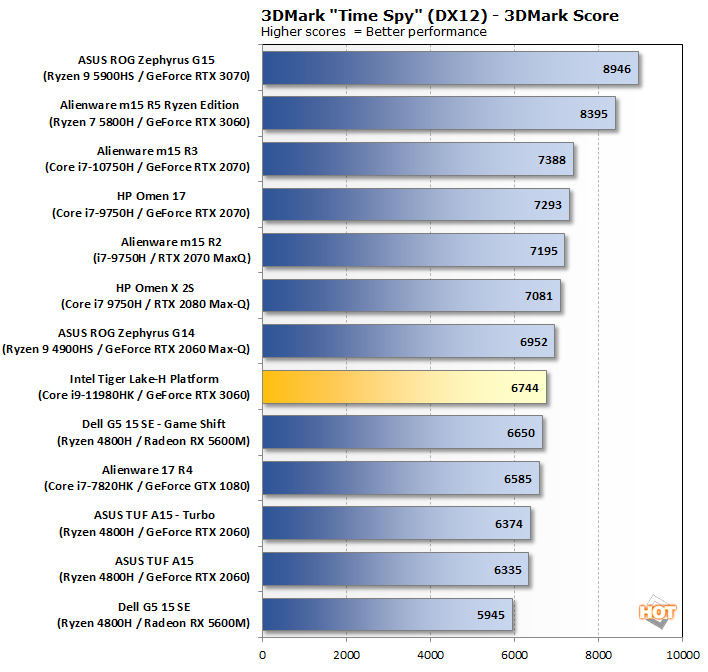 The Core i9-11980HK / GeForce RTX 3060 powered machine landed about in the middle of the pack, behind some RTX 20-series machines. At the top of heap were some higher-powered RTX 30-series based notebooks featuring Ryzen 5000 series processors. 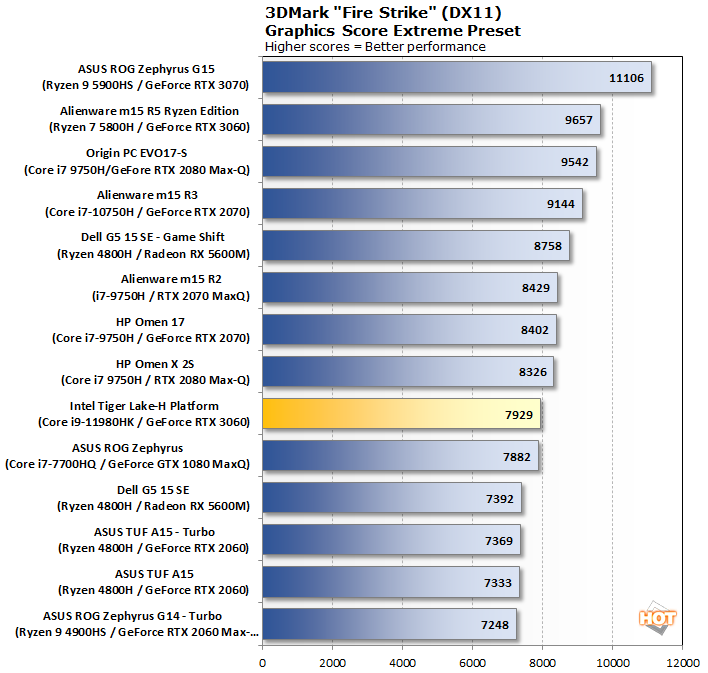 Once again we see the Core i9-11980HK / GeForce RTX 3060 powered machine falling in behind some other notebooks with more powerful GPUs.

Lastly, the Port Royal test uses DirectX Ray Tracing (DXR) to illuminate a scene. So far, the only notebook GPUs that can power this benchmark come from the NVIDIA camp, since AMD's Big Navi graphics core architecture hasn't made it into a mobile platform yet. 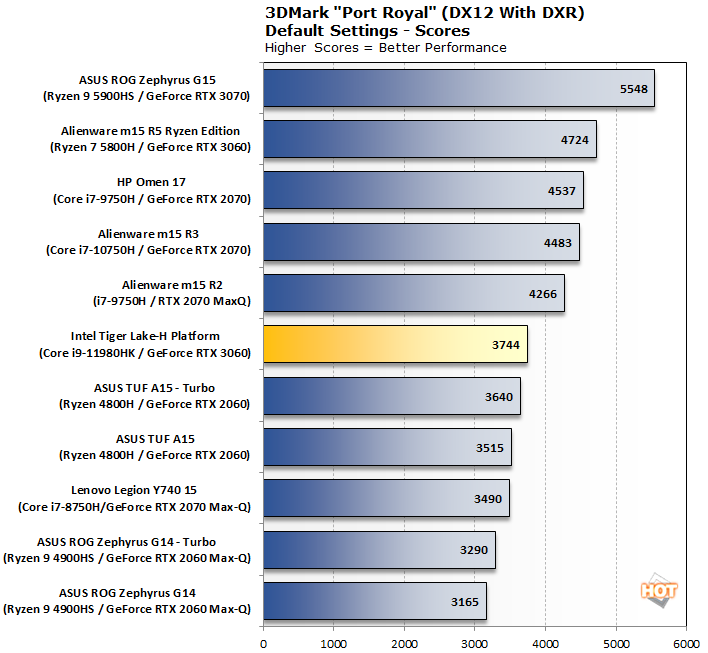 The Core i9-11980HK / GeForce RTX 3060 combo is able to outrun some, but not all of the RTX 20-series machines, but the larger notebooks, with higher-powered GPUs jump out to significant leads in this ray tracing benchmark. 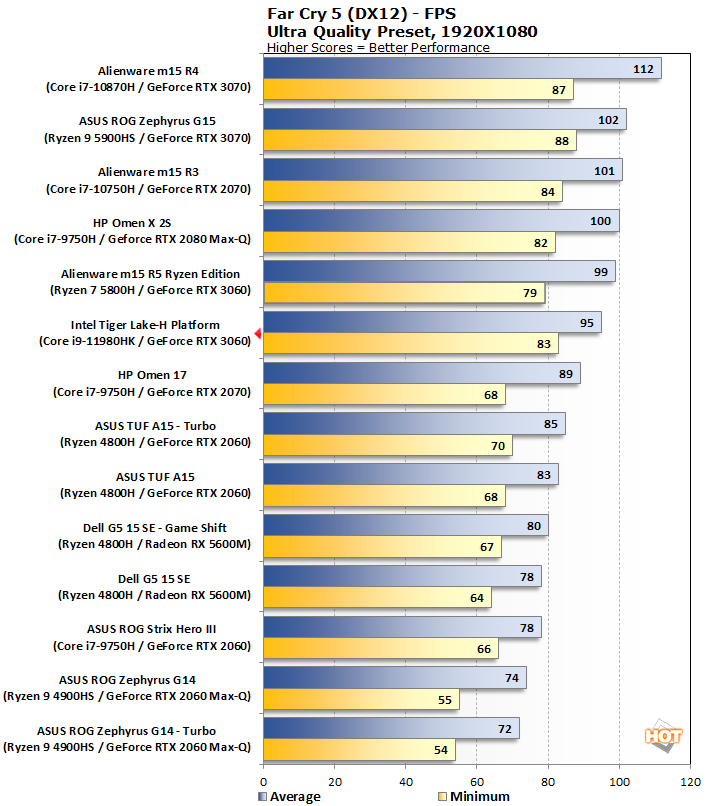 Our FarCry 5 tests had the Core i9-11980HK / GeForce RTX 3060 powered machine putting up one of the better minimum framerates, with a competitive average framerate that fell in line, just behind the newest Alienware m15 R5 Ryzen Edition that packs a similar GPU. 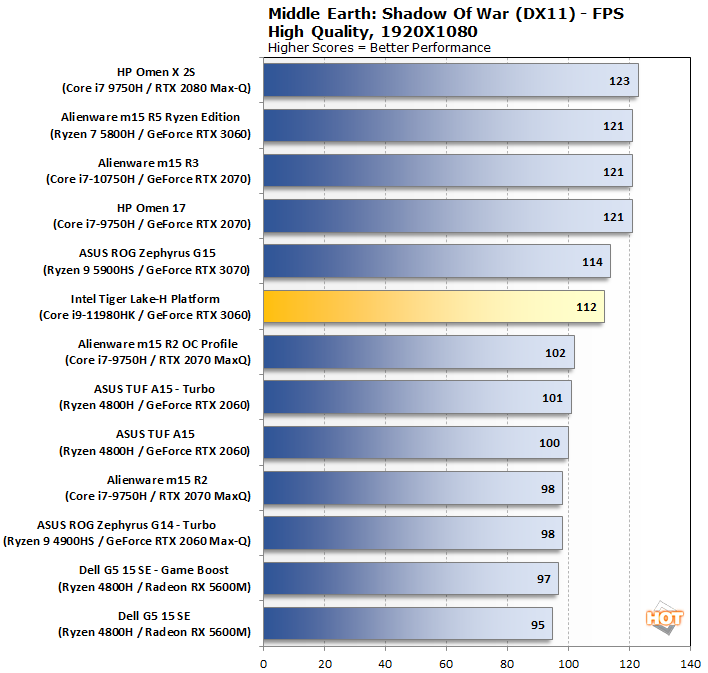 The Middle Earth Shadow Of War benchmark had the Core i9-11980HK / GeForce RTX 3060 finishing about in the middle of the pack. 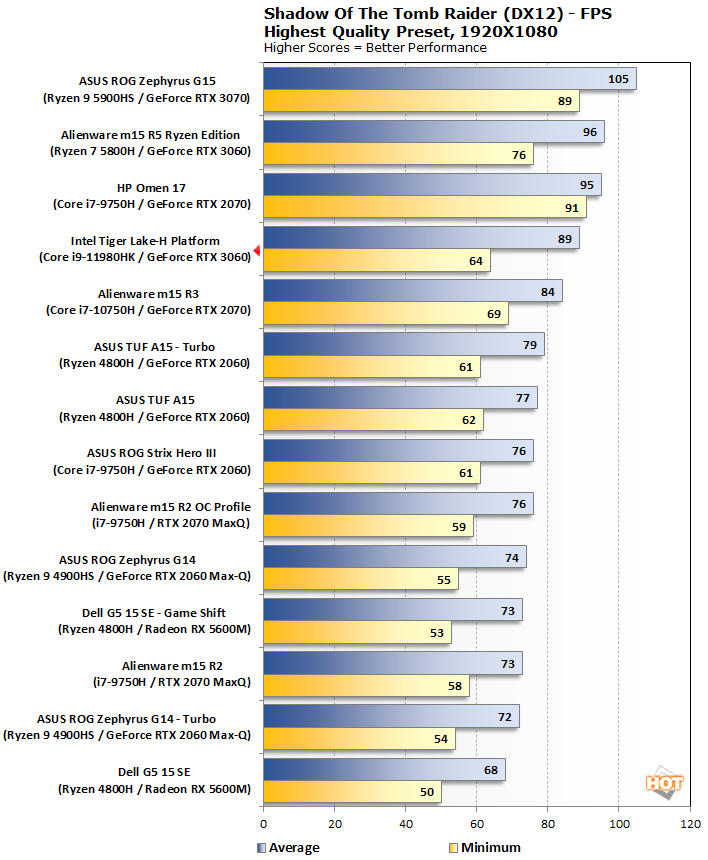 We saw more of the same in the Tomb Raider benchmark, with the Core i9-11980HK / GeForce RTX 3060 based machine putting up good numbers, that landed somewhere in the middle of the pack, behind the larger systems, with higher-powered GPUs.

Although the notebook we tested isn't something that's destined for retail shelves, and may not behave like retail-ready machine from Intel's partners, we still spent some time evaluating its power and thermal characteristics, to see how it handled the flagship Core i9-11980HK under its hood. 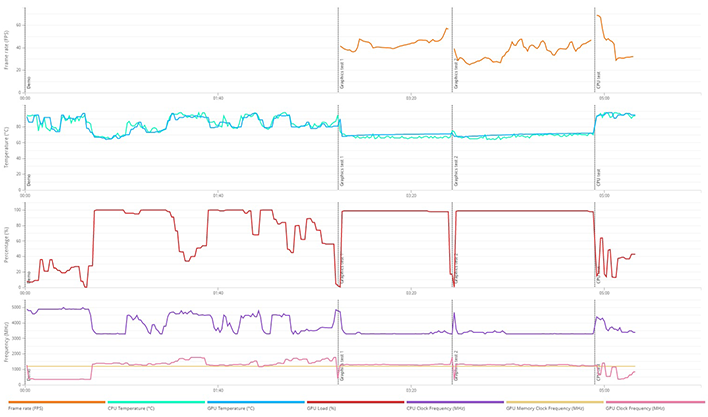 The data you see above was captured during a default 3DMark Time Spy run. If you click the image to enlarge (and make it easier to read), you'll see the Core i9-11980HK routinely boosting to the 5GHz in the beginning, but fluctuating more significantly as the test gets on. Temperatures for the CPU and GPU both routinely hit the upper 90°C range as well.

We also monitored the machine's power draw at the outlet, to see what kind of juice the system was pulling. Like most current notebooks, this Core i9-11980HK powered system will boost up to its highest frequencies and power states when under load, and if the workload is long enough, it'll drop into a lower power state once thermal saturation becomes and issue. At idle, the system pulled only 16 watts from the wall (with the display powered on) and in its highest-power state, with a multi-threaded workload, the system pulled 138 watts. 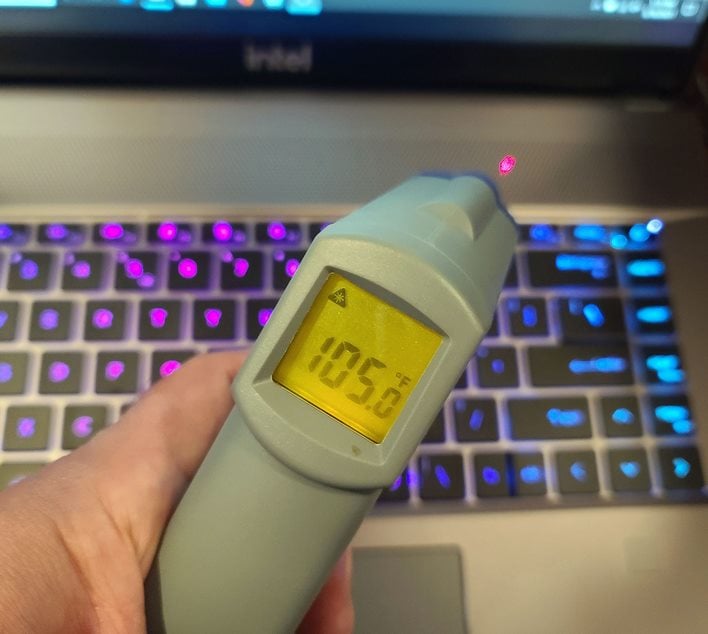 With so much power running through a relative thin system, heat can be an issue. We measured skin temperatures in various areas around the notebook and found the warmest section in the vents at the top of the keyboard deck. That section hit 105°F (37.7°C), which is warm to the touch, but not warm enough to force you to pull your hand away. It certainly is toasty though and not something you'd want to be in contact with for any length of time. 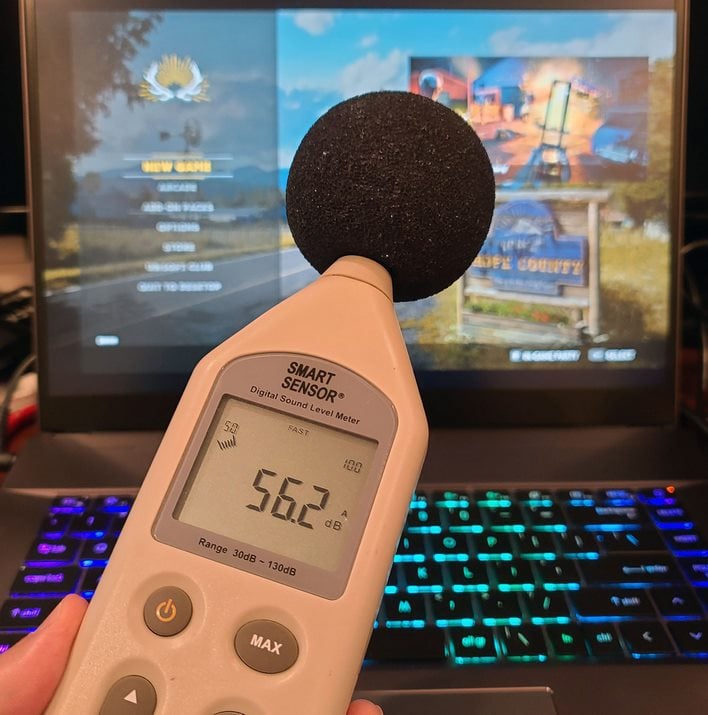 In terms of its acoustic output, under load with the system's fans running full bore, we routinely measured sound pressure levels just above 56dB from about a foot away from the keyboard deck. We consider this kind of output to be loud for a laptop, but we should mention the system doesn't often produce this kind of output during regular use. Fire up a game though, which puts a load on the CPU and GPU and its fans spin up relatively quickly. 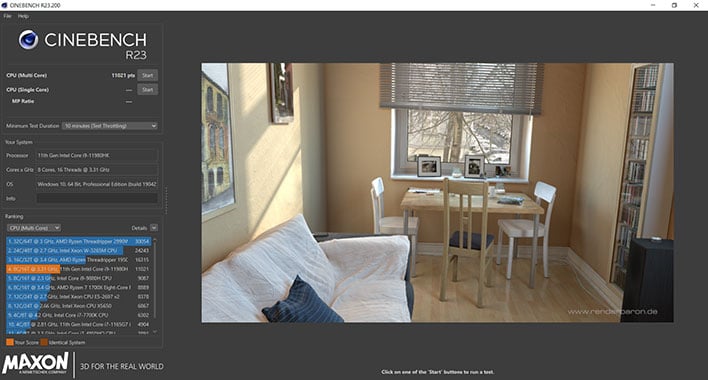 Although this notebook is relatively thin and its CPU and GPU can run quite warm under load, thermal throttling was not an issue. After a ten minute loop of Cinebench R23, the system bled off less than 2% of its performance (11220 first run, 11020 after ten minutes).

We aren't going to draw an final conclusions on Tiger Lake-H and the Core i9-11980HK based on the short time we've had with this evaluation unit. We'll have to wait until we get our hands on some full-retail systems from Intel's partners do that. However, we can make some interesting observations. First and foremost, the Core i9-11980HK is fast. It clearly offers the best single and lightly-threaded performance of any x86 mobile processor. For day-to-day computing and office-type tasks, everything is as snappy and responsive as we've saw in our benchmark runs. Multi-threaded performance is also strong, and clearly outpaces all other previous-gen Intel H-Series mobile processors. It can't quite catch the top-end 8-core Ryzen 5000 series processors in the multi-threaded tests, however. 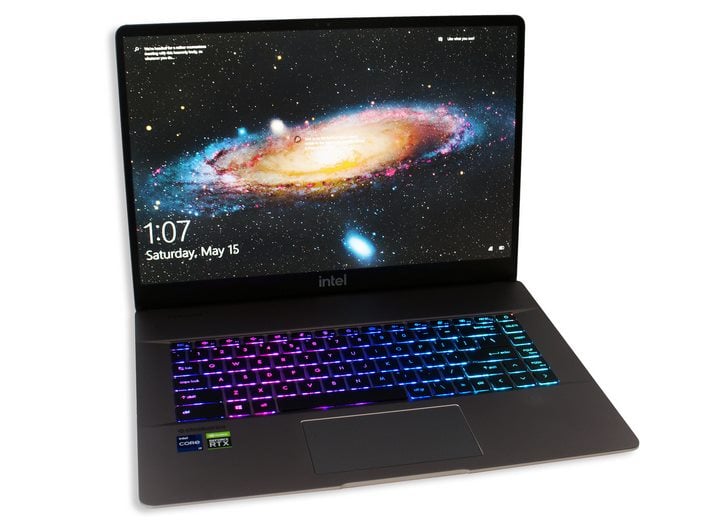 Having this much horsepower in such a thin form factor poses some thermal and acoustic challenges, as evidenced by the data above, but we believe Intel's system partners will be able to manage it, especially considering the minimal throttling exhibited by this pre-release system. Somewhat thicker retail-ready gaming notebooks, with higher thermal capacity, will likely exhibit even better performance than we've seen here, which bodes well for Intel's latest top-end mobile processor.

Thankfully, we won't have to wait much longer to see what Intel's partners can do with this new mobile platform because systems are going on sale today. We should have retail-ready systems in hand soon, so stay tuned to HotHardware for additional Tiger Lake-H performance data in the weeks ahead.
PREV PAGE