Next, we are going to run an array of 3DMark gaming tests on the Intel NUC 9 Extreme and will compare it to as many systems as we can, desktop, notebook, and small form factor systems alike... 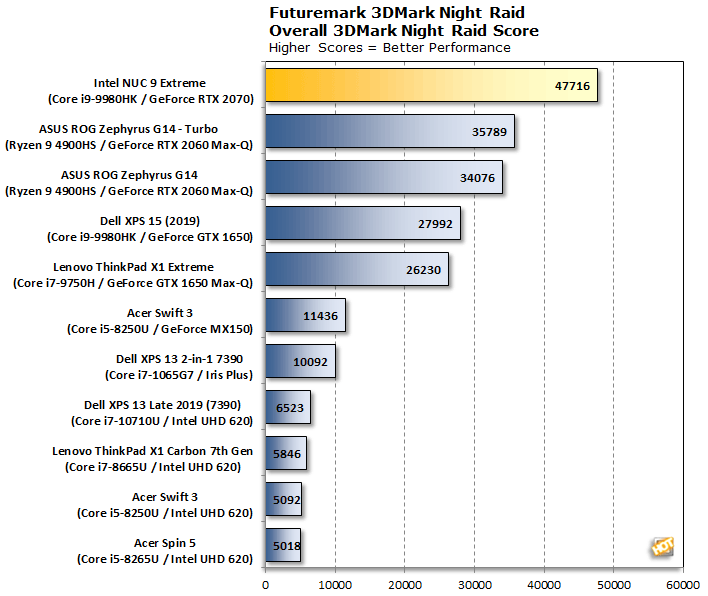 In the relatively light-duty Night Raid benchmark (which we normally only run on notebooks), the Intel NUC 9 Extreme and its GeForce RTX 2070 leads the pack by a wide margin. Of course, it should, considering it features the most powerful discrete GPU of the bunch. 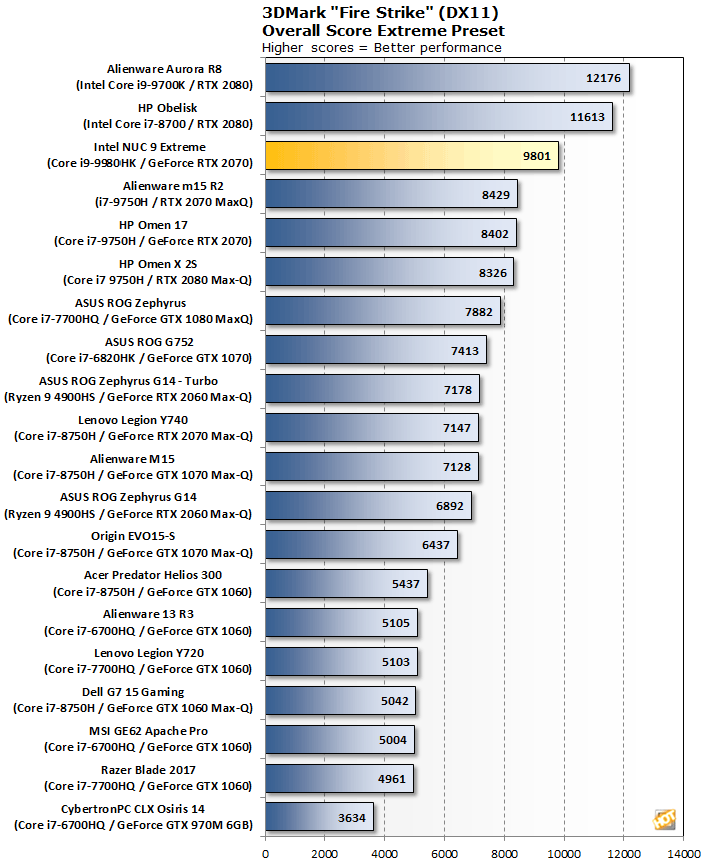 With the 3DMark Fire Strike Extreme benchmark, we have much more performance data from some high-end gaming notebooks and small-ish form factor desktops. Here, the Intel NUC 9 Extreme approaches the highest performing systems. What is evident is that the "mobile" Core i9-9980HK used to power the Intel NUC 9 Extreme has plenty of oomph to keep a GeForce RTX 2070 fed. Only the RTX 2080-equipped systems are faster here. 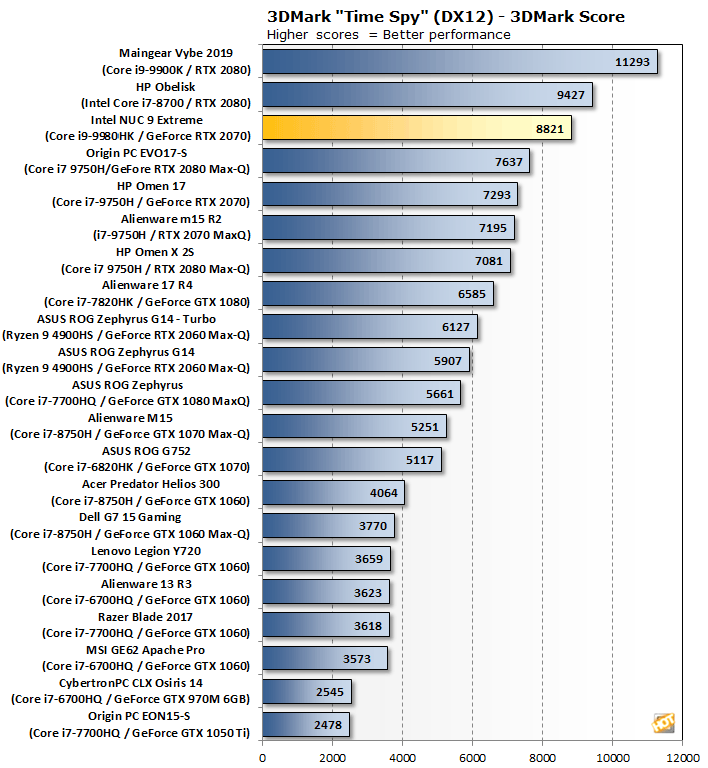 The DX12-based 3DMark Time Spy benchmark tells essentially the same story as Fire Strike. Here, the Intel NUC 9 Extreme performs very well once again, but the more powerful desktop systems with GeForce RTX 2080 cards come out on top (as you would expect). 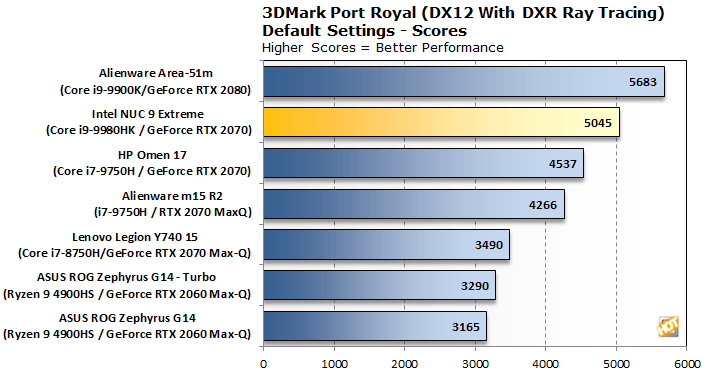 We also had some 3DMark Port Royal ray tracing benchmark data available to see how the Intel NUC 9 Extreme with is GeForce RTX 2070 compared to a few other systems. And as you can see, the system's GPU doesn't appear constrained by the mobile processor at all. The GeForce RTX 2070 in the NUC 9 Extreme performs as expected and trailed only the GeForce RTX 2080-powered Alienware Area 51m high-end gaming notebook.


With our synthetic testing out of the way, this is where the rubber meets the road—actual games. Though is it relatively small, the Intel NUC 9 Extreme is well-equipped for gaming with such a powerful processor and GeForce RTX-class GPU. Here's how things shook out... 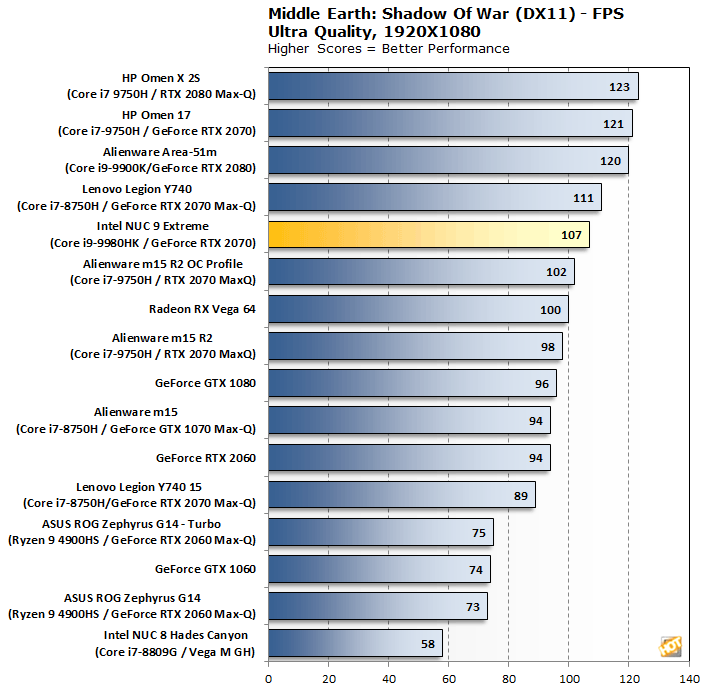 Although it performed well and landed in the upper quadrant of systems, the Intel NUC 9 Extreme with GeForce RTX 2070 performed slightly lower than expected in Shadow Of War. The system was still in the mix with others featuring GeForce RTX 2070s and 2080s, but was ultimately a few frames per second behind. Notice at the bottom of the chart you'll find the previous-gen NUC 8 with integrated Radeon Vega graphics. Though that system is very powerful for its size, there's simply no matching a discrete, high-end GPU for gaming.


The finale in the rebooted Tomb Raider trilogy, "Shadow of the Tomb Raider," is easily the best-looking of the bunch. It's also brimming with Tobii eye-tracking hardware support, and leading edge graphics technologies. To test this game out, we again turned the visuals up to High and tested at the full-HD resolution of 1920x1080. 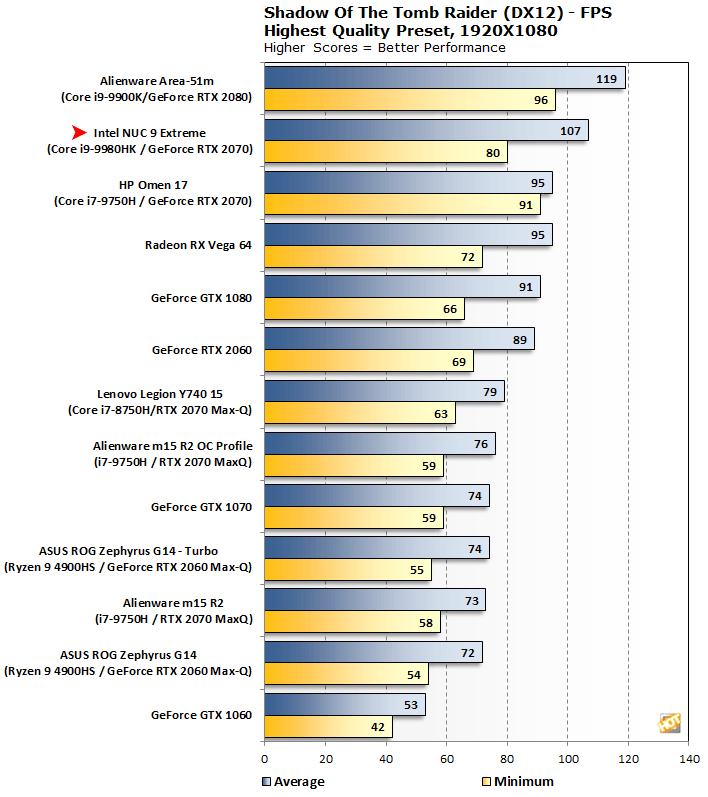 In the Shadow Of The Tomb Raider benchmark, once again we see the Intel NUC 9 Extreme with GeForce RTX 2070 finishing near the top of the charts. The CPU allows the RTX 2070 to fun full-tilt, and only the RTX 2080 ends up being faster.

Throughout all of our benchmarking and testing, we also monitored how much power our Intel NUC 9 Extreme test system was consuming with a power meter, versus some of the other desktop systems we used for benchmark comparisons. 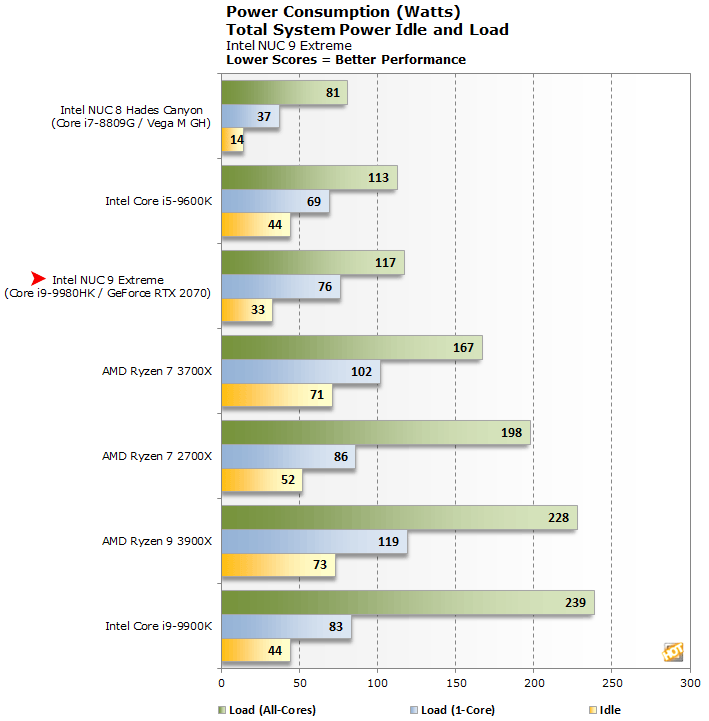 We also monitored power in a gaming scenario to see how the discrete GPU affected things. As you can see, firing up the GeForce RTX 2070 more than doubles the system's peak power.

Although the system is relatively small, the Intel NUC 9 Extreme we tested, which was equipped with an ASUS GeForce RTX 2070, has 6 fans inside keeping it cool -- two at the top of the chassis, one on the compute module, one in the PSU, and two on the GPU. It's typically difficult to keep high-performance, small form factor systems cool and quite, but Intel (and ASUS) appear to have done a commendable job... 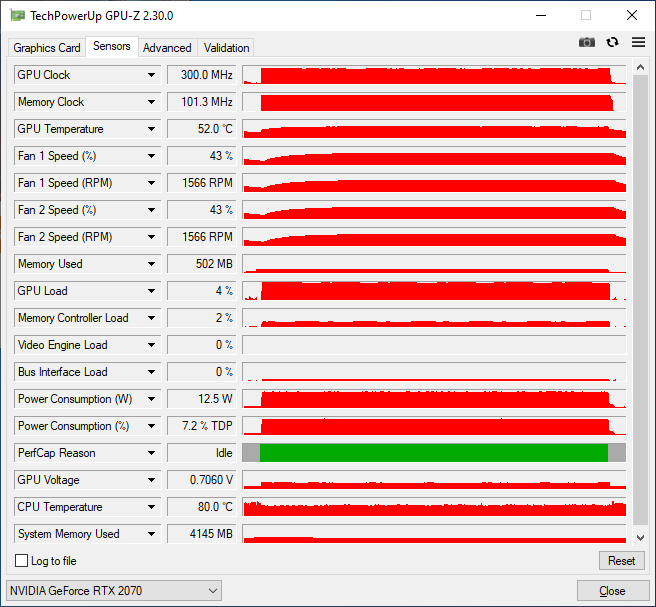 After hours of benchmarking, and 20 consecutive loops of 3DMark's Time Spy stress test, this is what CPU and GPU temperatures and fan speeds looked like. The CPU temp will peak into the 90s for short stints, but the GPU runs nice and cool -- having access to outside air right though the mesh side panel helps GPU temperatures stay nice and low. 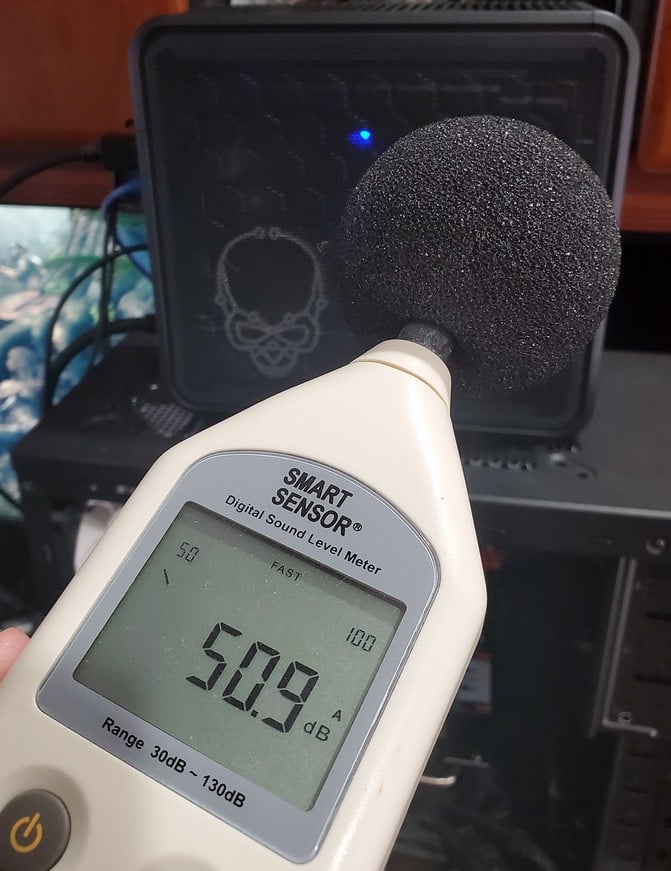 The Intel NUC 9 Extreme with the particular ASUS GeForce RTX 2070 we have installed is very quite under normal desktop use and doesn't register on our sound meter, above the typical ambient noise (the GPU fans don't even spin when the system is idling). Under a sustained load, however, when both the CPU and GPU fans are cranking, the system is clearly audible and broke the 50dB mark on our meter, when placed about a foot away from the side panel. Although that's not quiet, and the fans are more audible when they would be in a closed mid-tower, we wouldn't consider the Intel NUC 9 Extreme, as we had it configured, to be particularly loud. And its fan pitch wasn't irritating (to us) either.

We have always been fans of small form factor (SFF) systems. As much as we love a big, beefy full tower, packed to the gills with powerful hardware, that's not practical for everyone and there's just something about a full-featured, tiny rig that's attractive. For most users, a small form factor system also offers more than enough horsepower for their daily computing needs, even if the system may lack some of the expansion possibilities of a full-sized desktop.

The Intel NUC 9 Extreme is a different sort of animal, though. It may be an SFF, and in its current form, may feature a mobile CPU, but the Core i9-based version of the system we tested is quite powerful, especially when stacked with a GeForce RTX-class discrete GPU. Although we tested this petite rig with a discrete GeForce card, keep in mind that the Intel NUC 9 Extreme does have an iGPU as well -- the discrete GPU is optional. 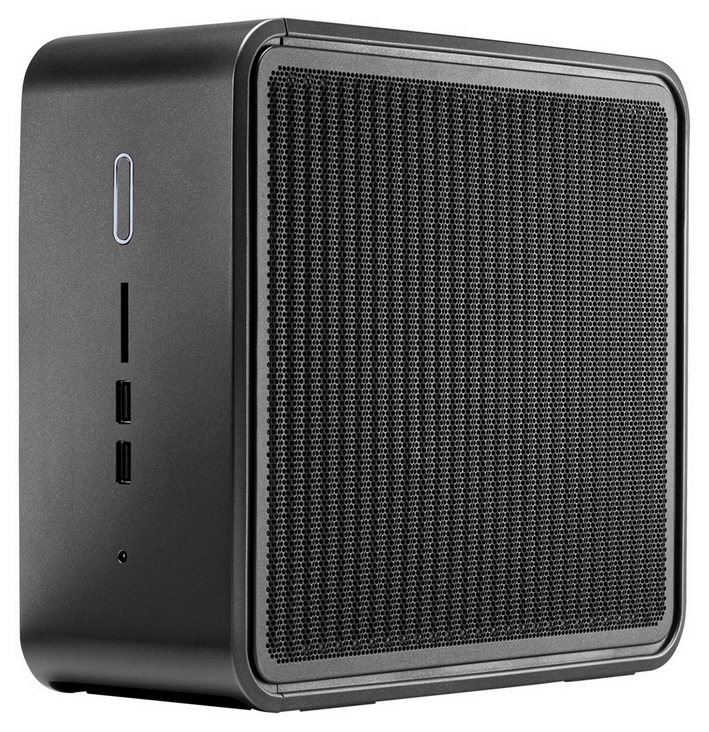 
So, with the Intel NUC 9 Extreme, you get a relatively small system, roughly half the size of what a do-it-yourselfer could build with off-the-shelf mini-ITX parts (if they wanted to incorporate a discrete GPU). And the Intel NUC 9 Extreme's modular design allows for a couple of expansion slots, and a trio of M.2-bases storage solutions. All told, you could assemble a quite powerful little beast of a gaming and content creation PC with the Intel NUC 9 Extreme -- but (there's always a but), it comes at a premium. The Intel NUC 9 Extreme (model NUC9i9QNX), without any components or accessories will sell for about $1,639. Add in the GPU, memory, storage, and an OS, and you're easily north of $2,000. There is no denying that you can assemble a somewhat larger mini-ITX system, perhaps with better performance, for potentially much less. Intel's long-term support for the NUC 9's compute module is also required to ensure an upgrade path. Intel assures us they have ecosystem partners lined up and they're planning to support the design for the foreseeable future, but if the design doesn't resonate in the market, who knows what'll happen down the line.

As it stands today, the Intel NUC 9 Extreme is a really cool product, that brings powerful hardware and a bit of DIY flavor into an attractive, compact form factor. There is a premium to be paid to play with a system of this type, but if the idea of a high-performance small form factor system is appealing to you, the Intel NUC 9 Extreme is an innovative solution that worthy of your consideration.