The Core i9-11900K is the fastest Rocket Lake chip in Intel's stable. It is an 8-core/16-thread part with a 3.5GHz base clock, 5.3GHz max Turbo frequency, and 16MB of L3 cache. The default TDP is set at 125W (configurable down to 95W), but at full bore, expect the chip to blow past that mark, especially with Intel loosening the thermal reins to accommodate its Adaptive Boost technology.
To measure idle power consumption, we let the Falcon Northwest Talon boot to the Windows desktop and settle for a few minutes. Once the value on the Kill-A-Watt stabilized, we recorded that value as the idle consumption. The loaded figure represents perhaps a slightly unrealistic scenario in which the system is tasked with running both Prime95's Small FFT test and a 2560x1440 Furmark stress test simultaneously. This desktop PC was plugged directly into our Kill-A-Watt for all measurements, so only its power draw is being measured here. 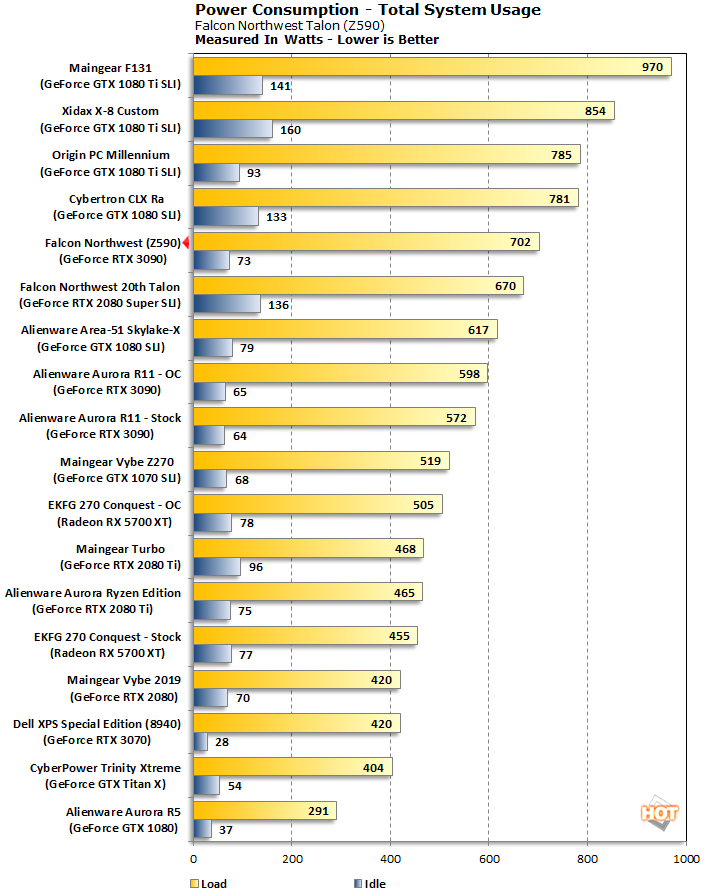 At idle, the Talon hovered around 73W, with occasional spikes because PCs always seem to be doing something in the background. When we first fired up the toasty combo of Prime95 and Furmark, our wattage readings peaked at 795 ever-so-briefly, then came down a bit. After running the stress test for around 15 minutes, the system was pulling about 702W from the wall, with dips and spikes. That's a lot of juice, but with an EVGA 1000W SuperNOVA power supply with 80 Plus Gold certification underneath the hood, it's not worrisome (there's wattage to spare, here).

While under load, we tracked the system's thermals and acoustic behavior, driven by a the custom AIO cooler with two 140mm fans attached to the radiator, a 140mm exhaust fan, and three fans on the graphics card. Below are the results.... 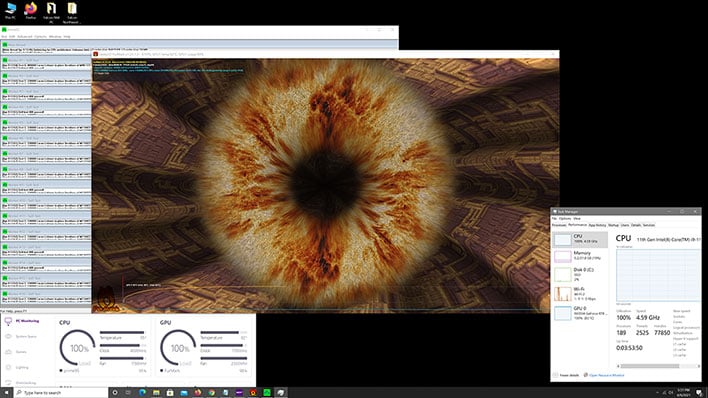 In this stress test, the CPU temperature reached 95°C, which is pretty hot, while maintaining a 4.6GHz clockspeed. The GPU, meanwhile, bounced back and forth between 83°C and 84°C while hammering it over the head with Furmark. These are obviously worst case scenarios. At idle, the CPU cores sit at around 29°C and the GPU stays close to 36°C.

As for noise, the Talon is virtually silent at idle, and fairly quiet with a light to medium load. Even when pushing the CPU and GPU at 100 percent for an extended period, the system never becomes obnoxiously loud. We measured around 48 decibels at the front of the case and 52 decibels with our sound meter positioned closer to the rear, where there are more openings for sound to spill through. Overall, the Talon does a good job at handling toasty components at acceptable noise levels.

We benchmarked the Falcon Northwest Talon as it shipped from the company to ensure we got the same out-of-box experience as your average buyer, with the latest Windows and driver updates installed. Many variables can affect performance, so our comparisons should serve as reference points, but may not be exactly like yours, even with similar configurations (it should be noted that Falcon Northwest opted to overclock the Core i9-11900K in our system, with a x54 multiplier). Our benchmarking kicks off with some SSD, system-level and CPU tests to get an idea as to how the system performs with a variety of workloads…

Running the ATTO Disk Benchmark allows us to gauge the speed of the boot drive in the system. In this case, the boot drive is a fast and capacious 2TB Samsung 980 Pro NVMe (Gen 4) SSD. Unlike SATA-based SSDs, NVMe drives shuttle data through the PCIe bus for potentially much faster throughput. This particular drive is rated to deliver up to 7GB/s of sequential reads and 5.1GB/s of sequential writes. 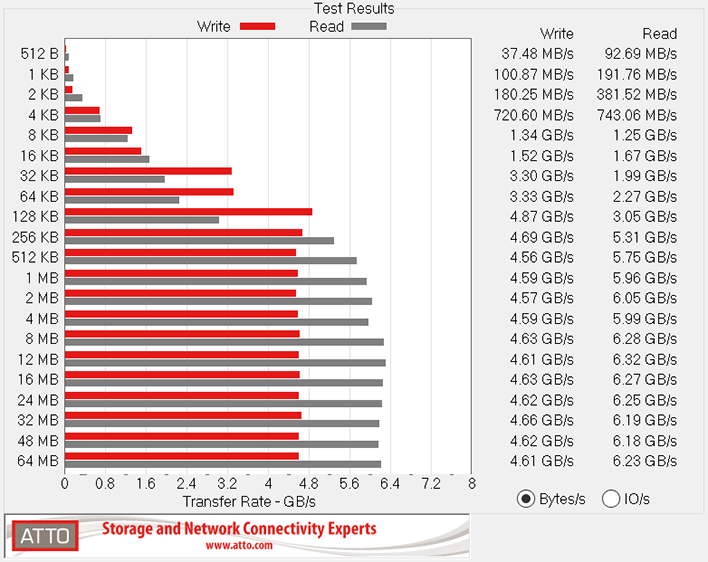 As we saw in our standalone review of the Samsung 980 Pro, the drive did not quite reach its maximum rated sequential read speed of 7GB/s, but it did deliver blistering fast performance, peaking at 6.32GB/s. That is nearly twice as zippy as what the best performing PCIe 3.0 SSDs can deliver.
Turning our attention to write performance, the 980 Pro inside the Talon topped out at nearly 4.9GB/s, and for the most part, consistently delivered around 4.6GB/s of performance at various queue depths.
With our disk speed sanity check out of the way, we can move on to assessing general system performance. The first stop is Cinebench R20. This test is based on Maxon’s Cinema 4D modeling software that is used in movie production studios. 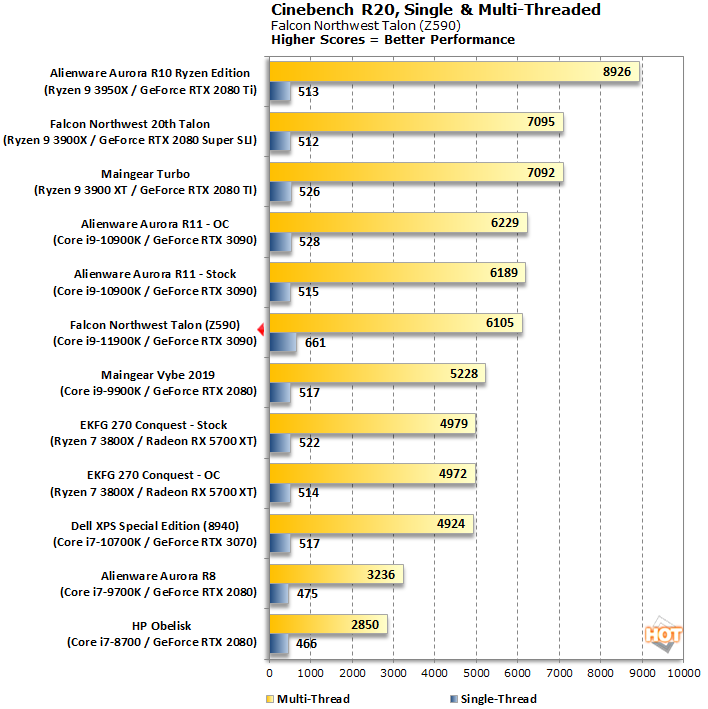 Here we see the Talon land around the middle of the pack, but a closer evaluation of the numbers paints a more complete canvas of performance. If we were to sort to by single-threaded performance, the Talon would jump to the front of the pack, with the overclocked Core i9-11900K scoring 661 in Cinebench R20. That is a 25 percent gain over the next-closest score (528, achieved by the Alienware Aurora R11 with an overclocked Core i9-10900K).
In the multi-threaded test, the Talon scored 6,105, putting it just 84 points below the same Alienware system (at stock settings). That's pretty impressive, considering the previous generation Core i9-10900K has two more physical cores and four additional threads to toss at this benchmark. That speaks to the IPC (instructions per clock) boost that Rocket Lake delivers over Comet Lake. 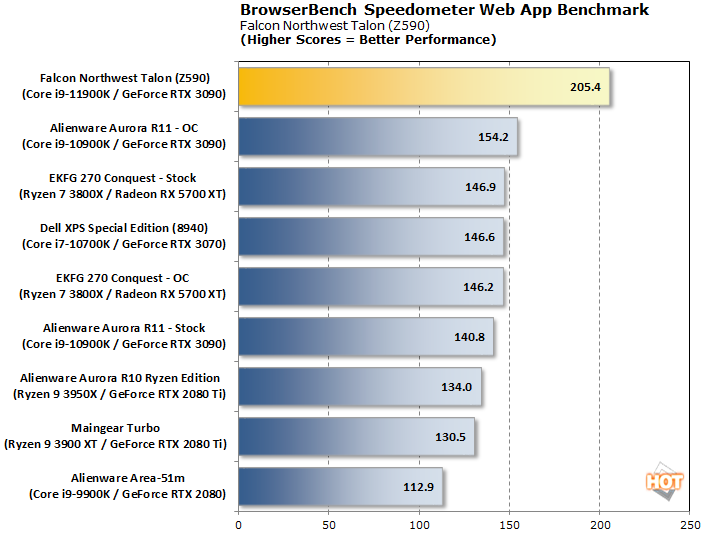 In this benchmark, it's no contest—the Talon pulls ahead of the pack by a generous margin, scoring over 33 percent higher than the next fastest score. It's a solid showing, as the other systems in the roundup are all high-end configurations as well.

UL Benchmarks' suite of tests have been the go-to system benchmarks since the late ‘90s. We ran the Falcon Northwest Talon through PCMark 10, which is designed to gauge the system performance in everyday use case scenarios with GPU acceleration-enabled. 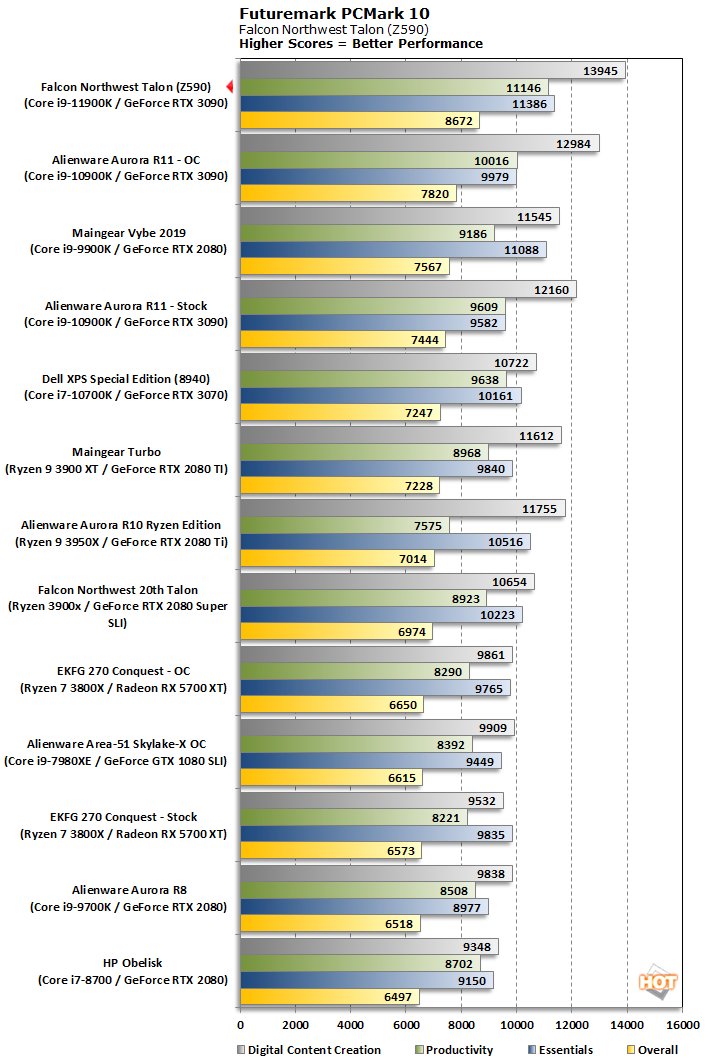 The Talon manages to grip onto another first-place finish, and not just in the overall scoring, where it led the pack by anywhere from 10.9 percent to 33.5 percent. This was a clean sweep. We don't often see systems dunk on the competition in all four scoring categories, even when posting a higher overall score. Typically there is some give and take among the individualized tests (Digital Content Creation, Productivity, and Essentials), but in this case, the Talon decided it would just dominate the field.

Let's move on to graphics and gaming...