3DMark is a synthetic GPU benchmark for assessing graphics (GPU) and physics (CPU) performance. 3DMark supports both DX11 and DX12, depending on the particular test being run, which makes it handy for testing GPUs of various performance levels. We used the FireStrike test's Extreme preset and the standard TimeSpy benchmark to push the EK Fluid Gaming 270 Conquest. FireStrike's Extreme preset runs the test at 2560x1440. We're reporting overall scores and physics subtest scores to see how the 270 Conquest performs. 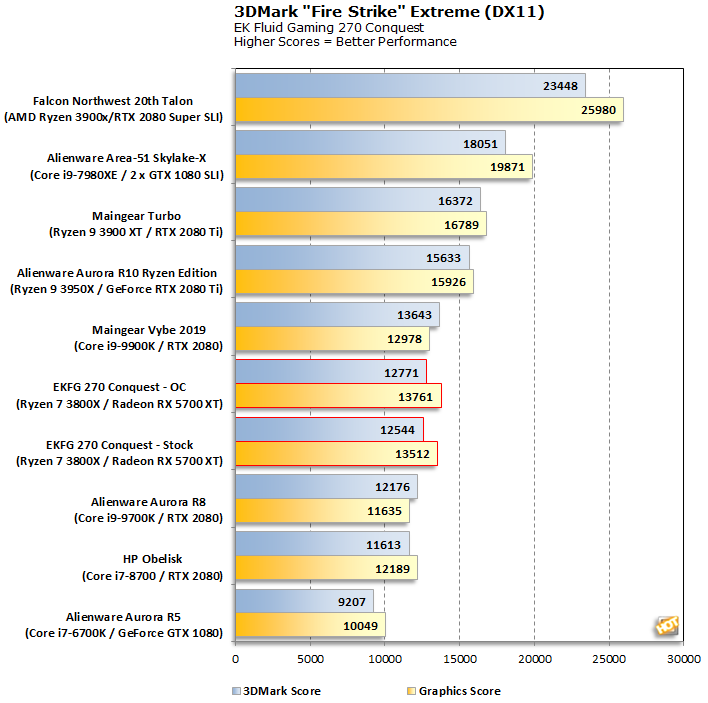 Time Spy is 3DMark's DirectX 12 test. This test also has multiple presets, but the standard Time Spy test is fairly taxing and we have a plethora of reference data, so that's what we stuck with. 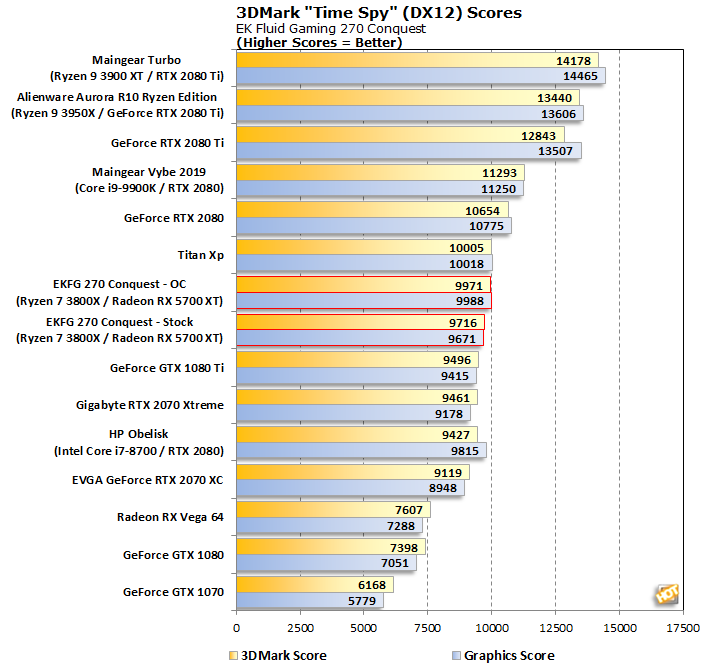 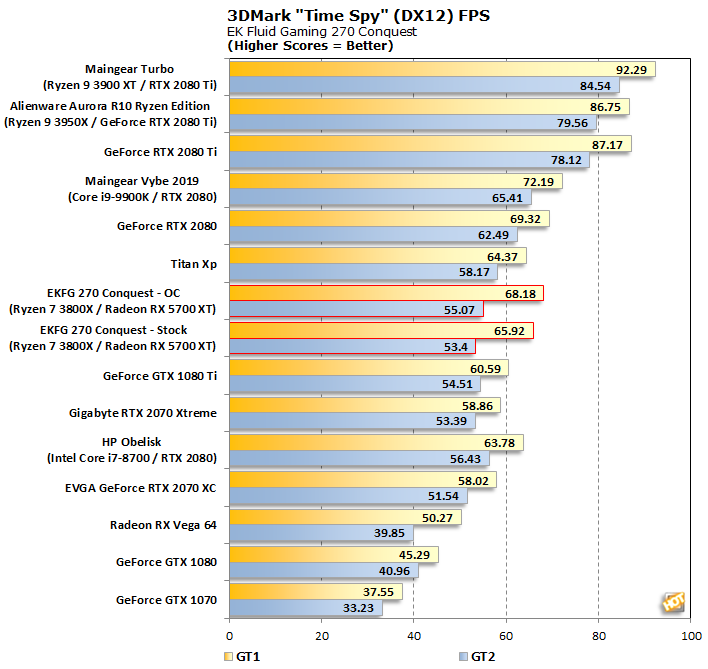 Time Spy retains the same approximate pecking order as Fire Strike Extreme. However, the CPU’s performance is more significant which keeps the Vybe ahead even for the graphics score. The 270 Conquest still pulls its weight ahead of the HP Obelisk, but only while overclocked in the graphics sub-score.

Now it's time to move on to our gaming tests. Playing the latest AAA games at high resolutions and detail settings is the reason you'd look to buy this desktop in the first place. 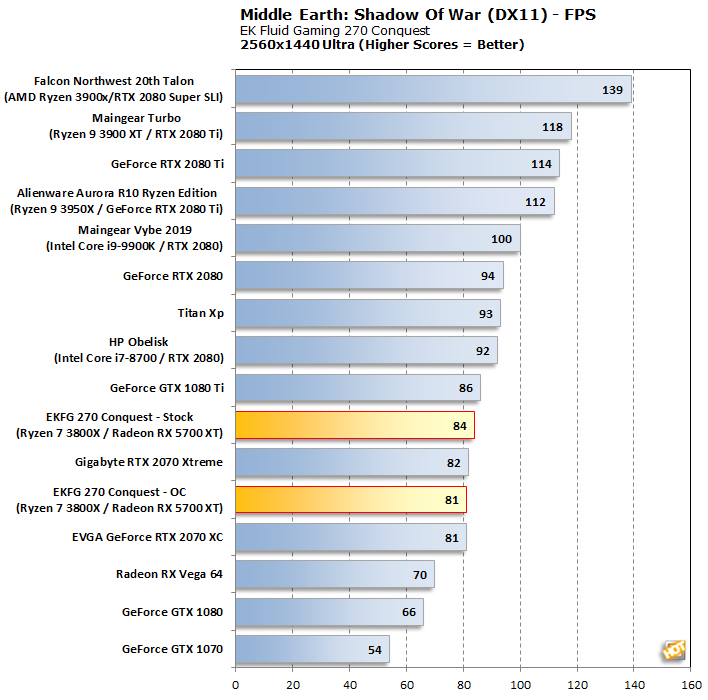 The 270 Conquests proves to be proficient at 1440p in Shadow of War. It keeps its head above 60fps by a fair margin at ultra, but some users may want to ratchet down a couple dials to make the most of a 144Hz 1440p monitor. Unfortunately, this title did not respond well to our overclock configuration and actually lost a couple FPS on average. 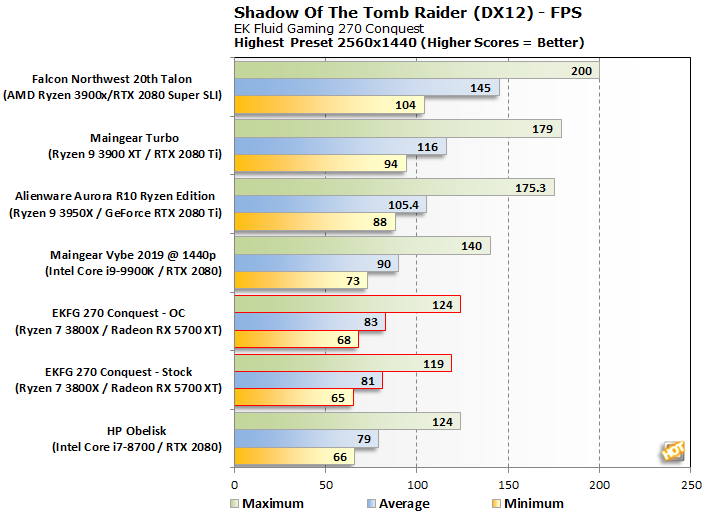 Tomb Raider delivers almost identical results to Shadow of War. The only difference is this time the overclock is nudging the system in the right direction.

Gears 5 is the other fall blockbuster we had a chance to dig deeply into, and this game proves you don't need ray tracing effects to make a gorgeous game. As with Control, Gears 5 is super-new, so our charts are a little sparse. We went all out here testing at 1440p and 2160p with the Ultra and High presets. 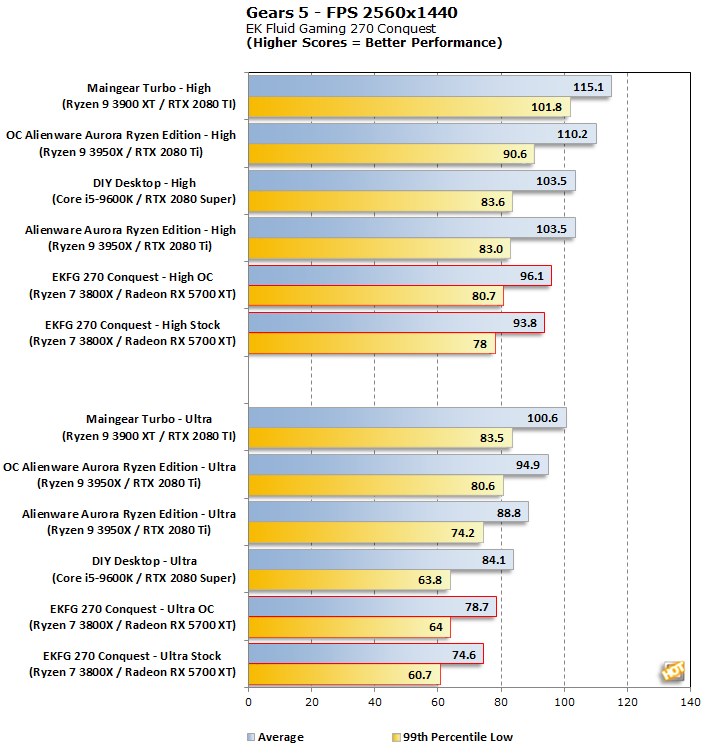 There are two sets of numbers here for all of the configurations, one set with the game configured for 'High' image quality settings and another with the game set to its 'Ultra' mode. Gears 5 is a little more demanding than the other titles at its highest visual fidelity, but the 270 Conquest still exceeds 60fps at all times in 1440p. 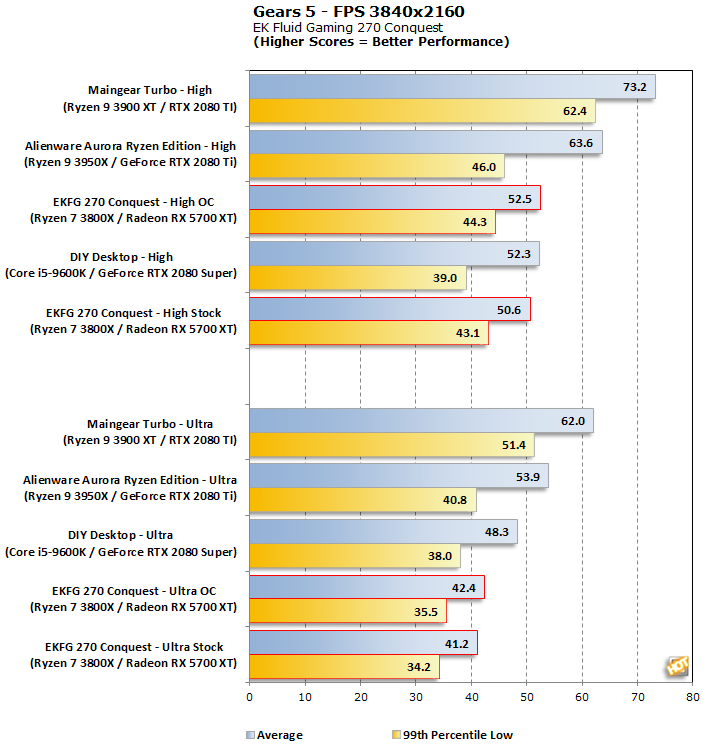 Moving up to 4K, however, does not quite reach that ideal over 60 fps turf. It is able to hold on at 4K Ultra with barely over “playable” framerates. Clearly, the 270 Conquest is much happier at QHD resolutions when outfitted with an Radeon RX 5700 XT, at least in AAA titles.
PREV PAGE NEXT PAGE