The EK Fluid Gaming 270 Conquest is already very capable thanks to its Ryzen 7 3800X and Radeon RX 5700 XT, but that doesn’t mean we won’t try to squeeze more out of it. For this review, we kept our goals modest and leaned on the auto-overclocking options of Ryzen Master and AMD's Radeon Adrenalin 2020 driver suite.

In Ryzen Master, we jumped into Basic Mode, toggled on AutoOC and rebooted. By default, AutoOC grants an additional 100 MHz of headroom and otherwise engages AMD’s Precision Boost Overdrive (PBO). After the reboot, we flipped open the Radeon's drivers, hit the Performance tab and set it to Overclock GPU. Overclock GPU targeted a boost frequency of 2160MHz. 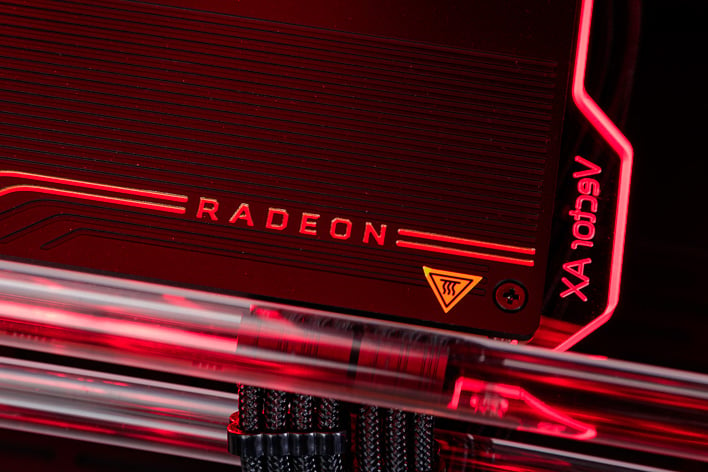 With Ryzen Master’s AutoOC, configuring a higher clock speed limit does not necessarily mean the chip will ever reach above stock speeds. In particular, AMD’s 3000-series processors tend to be configured very near to their maximum capability out of the box, so users do not need to tinker much to get the best performance from the feature. We will include stock and overclocked figures in each of our benchmarks to see how it plays out in our tests.

That said, users can manually overclock and push individual / all cores higher, but that's a topic for a different article. For this piece, we just wanted to see what kind of additional performance was available using automatic tools.

To measure idle power consumption, we let the EKFG 270 Conquest boot to the Windows desktop and settle for a few minutes. Once the value on the Kill-A-Watt stabilized, we recorded that value as the idle consumption. The loaded figure represents perhaps a slightly unrealistic scenario in which the 270 Conquest was tasked with running both Prime95's Small FFT test and a 2560x1440 Furmark stress test simultaneously for 30 minutes. This desktop PC was plugged directly into our Kill-A-Watt for all measurements, so only its power draw is being measured here. 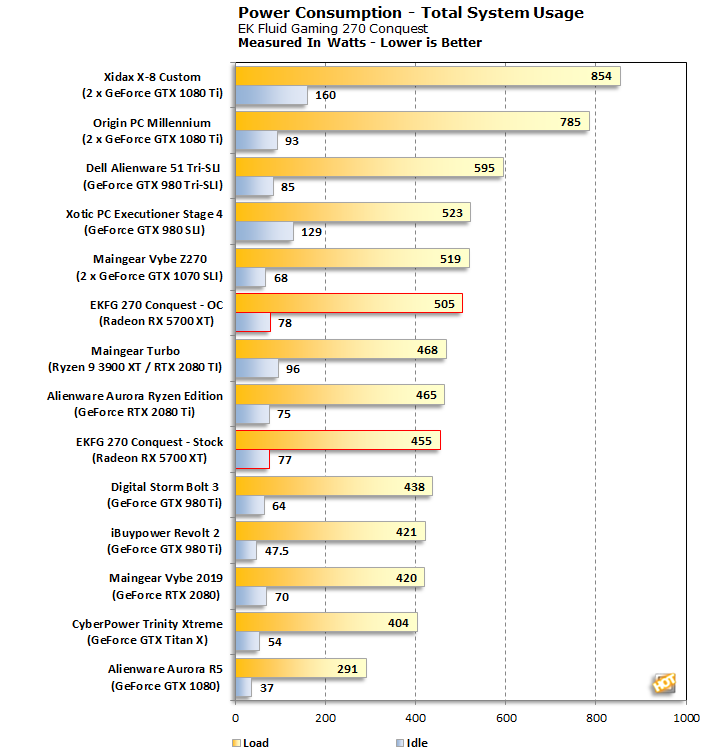 While idling at the desktop, the 270 Conquest runs just shy of 80W regardless of whether it is running at stock speeds or overclocked. That is great, because it means we are not eating up superfluous power when the system is not in use just to dial in some additional peak performance. We will note that while not listed in the graph, we were able to get idle power consumption down to just over 60W by setting the lights to Stealth mode, but where is the fun in that?

Under our torture test, the power consumption difference appears. The 270 Conquest consumes 50 more watts (+11%) in its overclocked state. Most of that wattage comes from the GPU overclock which ticks up from around 188W to 223W. Ryzen Master reports the same 106W or so peak CPU power draw for both cases.

While under load, we also tracked the system’s thermals and acoustics. Below are the results for the system while stock and overclocked with Ryzen Master and Adrenalin 2020 monitoring the action.

In both cases, the CPU metrics are virtually indistinguishable. This isn’t to say the overclock isn’t working, but the improvements are more likely to be seen in quick bursty workloads before other limits kick in. The CPU temperature holds steady at around 87°C which is a touch warmer than we might want to see, but is still a ways off from Tjunc’s 95°C. This is a no-holds barred stress test afterall and regular usage will not reach these levels.

On the graphics card front, however, we do see some improvement. At stock speeds, Furmark ticks away at around 98 FPS. However, once overclocked we see about a 5% improvement to around 102 FPS.


Acoustically, there is no difference between stock and overclocked settings. Both modes peak at around 46 or 47 dB as measured with our sound level meter. We also checked with the fan curves all set to “silent” in BIOS. We found no difference to peak volume or temperatures under load, but found the fans were less likely to ramp up while idle or under light workloads. We see little reason not to apply the silent fan curves (or a custom curve) to tame the system if you so choose. All our benchmarks, however, do reflect the out of the box standard fan curves.
PREV PAGE NEXT PAGE