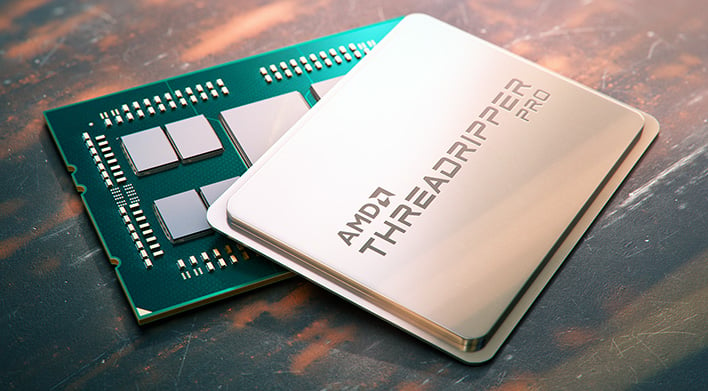 With the Threadripper Pro’s high core counts and 280W TDP, and specific chipset and 8-channel memory requirement, building up a system requires some special considerations. First and foremost is the motherboard. There are only a handful of socket sWRX8 motherboards available from makers like ASUS, ASRock, MSI and Supermicro. And all of them command a premium – the ASUS motherboard we used is currently available for about $950. For best performance, you’ll also need eight matching sticks of DDR4 memory. And because of the power requirements and high-end nature of the WRX80-based motherboards, a beefy power supply with multiple ATX12V CPU and 8-pin PCIe power feeds is needed. We used an EVGA 1300W unit for our setup. 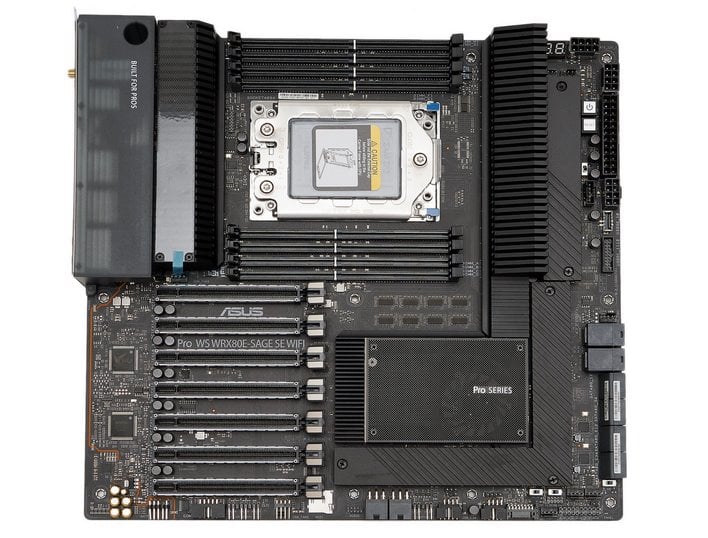 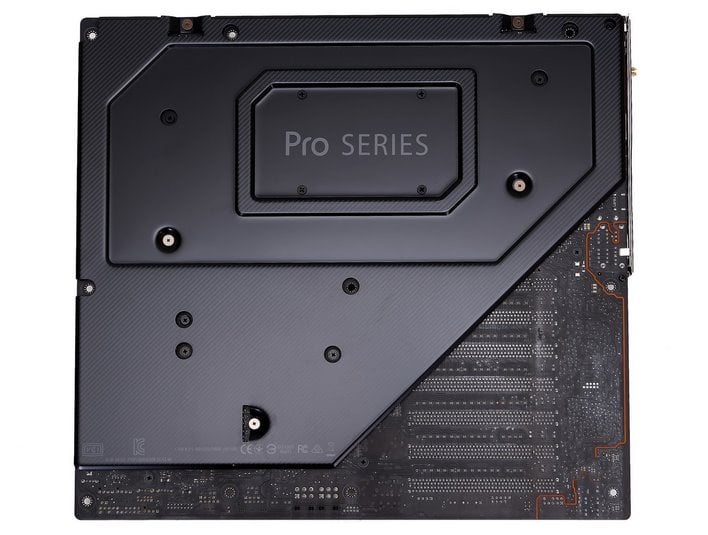 As we’ve seen many times over the years with ASUS’ high-end motherboards, the Pro WS WRX80E-SAGE SE WIFI is chock-full of features. This motherboard is outfitted with elaborate cooling, which include fans for the chipset and VRM, and a ton of additional capabilities over and above what’s offered by the chipset. There is even a massive backplate on the underside of the board to add rigidity and aid in cooling. The board also features 16 power phases, with enough headroom to handle the Threadripper Pro 5995WX’s 64-cores, the latest high-density memory kits, and multi-GPU configurations. 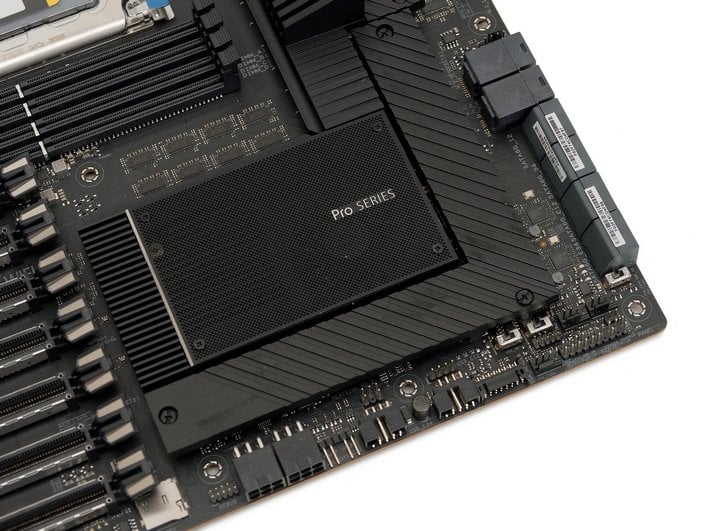 The ASUS Pro WS WRX80E-SAGE SE WIFI lacks any RGB lighting, which is probably a plus for some of you. And the board has metal reinforcements on its expansion slots, and heavy-duty heat-sinks and heat spreaders on the chipset and VRM and all 3 of its M.2 slots. Additional shielding covers the back panel I/O, and the area around the chipset as well. The heatsinks around the edge of the board are removable, and provide cooling for solid-state drives installed into the M.2 slots beneath. 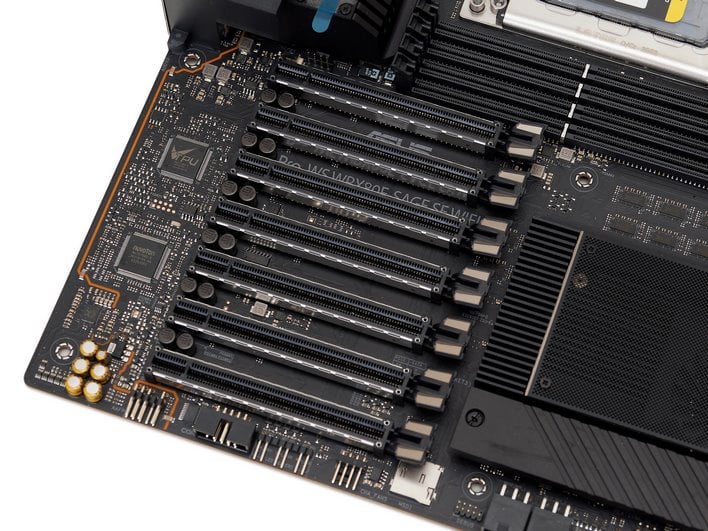 The ASUS Pro WS WRX80E-SAGE SE WIFI features high-end capacitors and chokes throughout its design, to improve long-term reliability and overall efficiency. And it features a mouse-friendly BIOS / UEFI that’s easy to navigate and offers an extensive array of performance-related options. The board also features built in ASMB9-iKVM remote management capabilities. There is a BMC chip on-board, which allows for out-of-band management of many aspects of the system. As long as the ASUS Pro WS WRX80E-SAGE SE WIFI powers up and has a connection to a network (and you know the system’s IP address), you can log into ASMB9-iKVM interface via web browser and manage the system. We actually used the ASMB9-iKVM interface to update the firmware when configuring our test system. 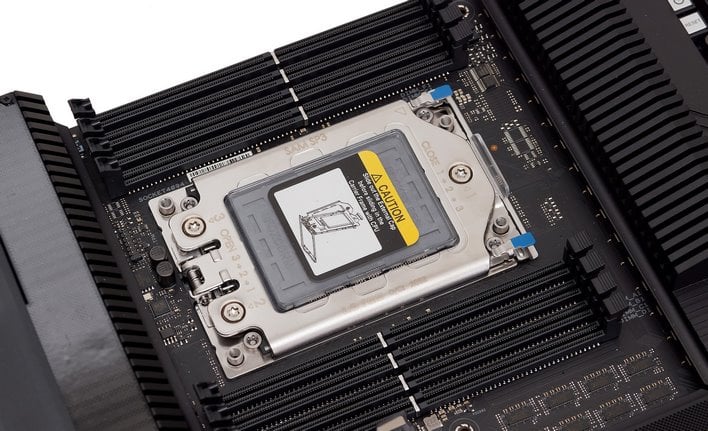 We should also point out that the ASUS Pro WS WRX80E-SAGE SE WIFI offers 8-channel audio by way of a Realtek W4080 USB controller, with support for DTS:X Ultra. The audio circuit incorporates shielding, discrete power delivery, and high-end Japanese capacitors for cleaner sound (120dB SNR) than most motherboards. It offers automatic impedance sensing for the front and rear headphone outputs too.

Over and above what’s actually built into the board or available through the chipset, ASUS throws in an array of accessories and integrated peripherals including the requisite documentation and cables to take advantage of them, though the board does feature a couple of U.2 ports and no cables are included for those. ASUS does throw in 3-months of Adobe Creative Cloud as a bonus, however.

Perhaps the most interesting included accessory is ASUS’ Hyper M.2 X16 Gen 4 card. This card gives users the ability to install 4 NVMe PCIe Gen 4 SSDs, configure them in RAID 0, and install the card in a full x16 slot for massive storage bandwidth. The card has a massive, removable heatsink and fan assembly to cool the drives and ensure peak performance, without throttling.

We found the layout of the ASUS Pro WS WRX80E-SAGE SE WIFI to be good, despite the relative complexity of the board, and also like the overall aesthetic. Your tastes may vary, of course, but we think this is a good looking motherboard. Its extended-ATX form factor and right-angle mounted headers will limit case compatibility, however. In the XPG Dominator case we used for our build, we were able to utilize the HD Audio header and connect the dual supplemental PCIe power feeds at the bottom, but the USB 2 and iKVM headers were blocked for the case’s PSU shield.

We also want to show off the memory we used for testing. We installed two matching 32GB quad-channel G-SKILL TridentZ Neo memory kits in our test rig, models F4-3200C16Q-32GTZN. 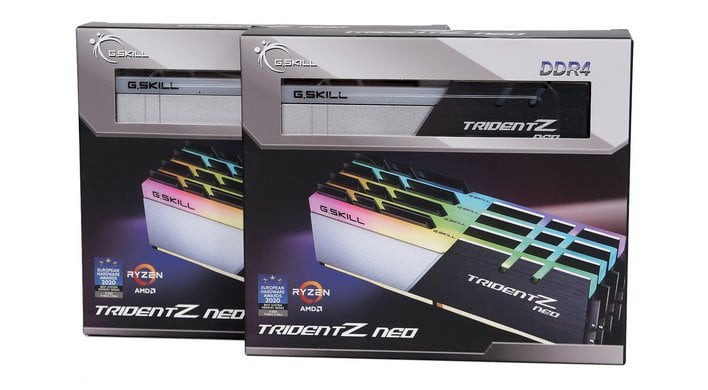 Each kit consists of four, matching 8GB sticks of memory, for a grand total of 64GB when configured in an 8-channel setup. 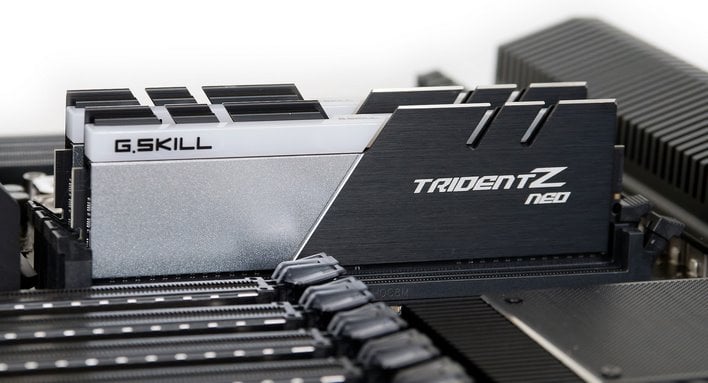 This memory is capable of running at 3,200MHz with relatively tight 16-18-18-38 timings at 1.35v. In addition, the sticks feature stylized heat spreaders, and the top edges are outfitted with light-bars that house RGB lighting. Although the lighting isn't configurable, it looks great when cycling through colors in our opinion, and definitely adds some visual appeal. Throughout our testing this memory was rock-solid when operating at its rated speeds and timings.

Speaking of testing, let's get to it...
PREV PAGE NEXT PAGE