AMD recently teased a range of new motherboards their partners have been cooking up. Yesterday's Meet The Experts webinar revealed key details about X670 and X670E motherboards from the likes of ASUS, MSI, ASRock, Gigabyte, and Biostar. These boards leverage the new AM5 socket which will be required to support AMD’s Ryzen 7000 Series of processors as they launch in the coming months. 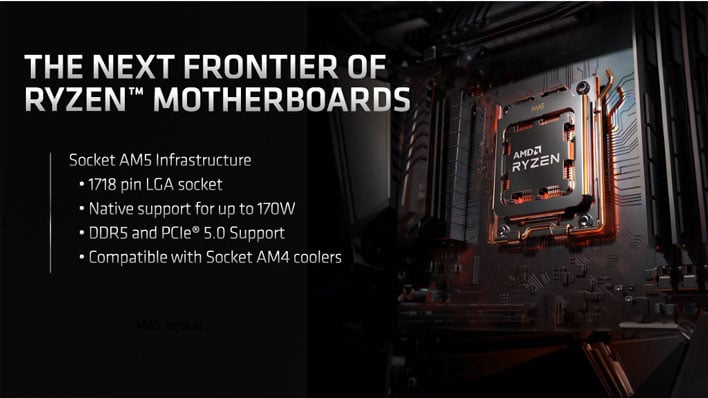 The AM5 socket transitions away from the PGA configuration used by AMD through AM4. PGA, or Pin Grid Array, is where the rows of tiny pins extend from the CPU package. Instead, AM5 joins Threadripper and rival CPUs from Intel in using LGA. LGA inverts the setup with pins coming from the motherboard while the CPU package has only contact pads. PGA has advantages for power delivery through increased contact but does not scale as densely as LGA when pin counts increase. With 1718 pins to bridge between CPU and motherboard in AM5, LGA is the sensible choice. 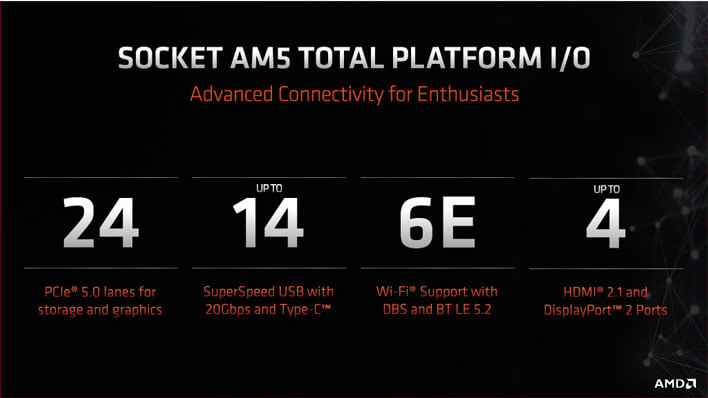 With these motherboards, Zen 4 CPUs will be able to draw up to 170 watts natively. The socket further supports DDR5 and PCI-e 5.0 for feature parity with Intel. These new motherboards will support 24 lanes of PCI-e 5.0, by the way, which appears to be an advantage over Intel Raptor Lake’s rumored 16 lanes. The AM5 platform rounds out its connectivity with up to 14 USB 3.2 Gen 2 (20Gbps) ports, native Wi-Fi 6E, and up to four HDMI 2.1 and DisplayPort 2 ports. 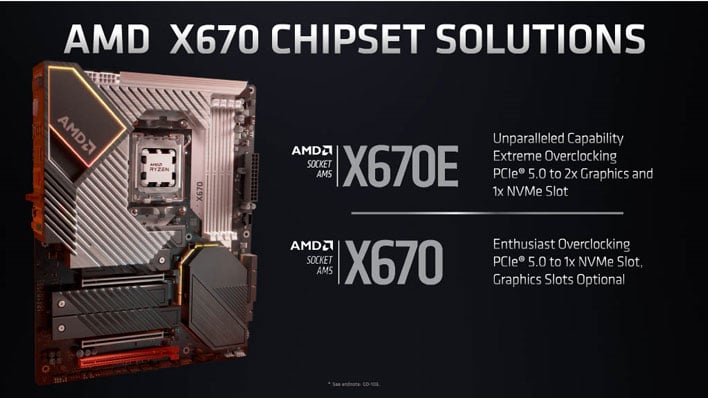 The motherboards covered here fall under the X670 and X670E monikers. The latter is AMD’s most premium offering. It is differentiated with “Unparalleled Capability” and “Extreme Overclocking” while supporting PCI-e 5.0 on two graphics cards and an NVMe slot simultaneously. The X670 chipset promises just “Enthusiast Overclocking,” support for a single NVMe slot on PCI-e 5.0 with the graphics slots optionally connected. We hope to qualify exactly what the difference between “Extreme” and “Enthusiast” overclocking is when we can get our hands on these boards. 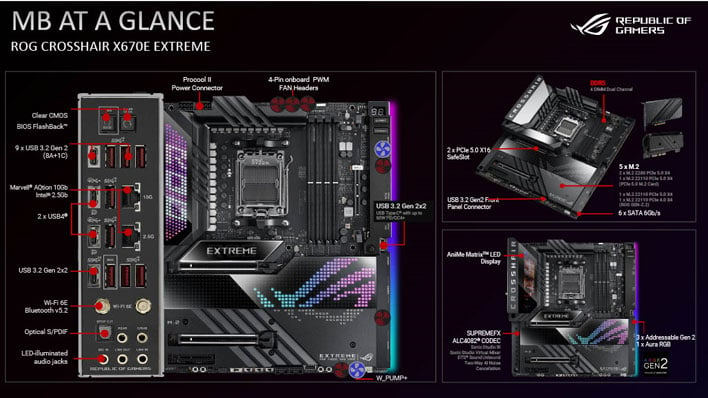 On to the stars of the show. This is not the first time we’ve glimpsed many of them, but new details are emerging. We first get a detailed breakdown of the ROG Crosshair X670E Extreme and X670E Hero boards from ASUS. Both offerings are positively loaded with I/O, but the Extreme brings an additional 10Gb Marvell AQtion network port in addition to the 2.5Gb Intel NIC found on both models and more premium lighting. 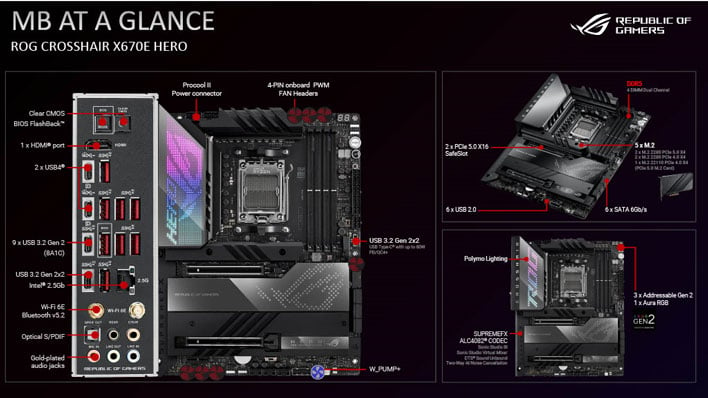 The boards have up to 22 paired 110-amp power stages (20+2 for the Extreme and 18+2 in the Hero) which should ensure power delivery remains stable under the most demanding overclocks. ASUS also includes some nice Q-Design features to improve quality of life. These include the Q-Latch for toolless M.2 drive installation, the Q-Connector to ease front panel connections, and Q-Release to make swapping a graphics card that much easier. 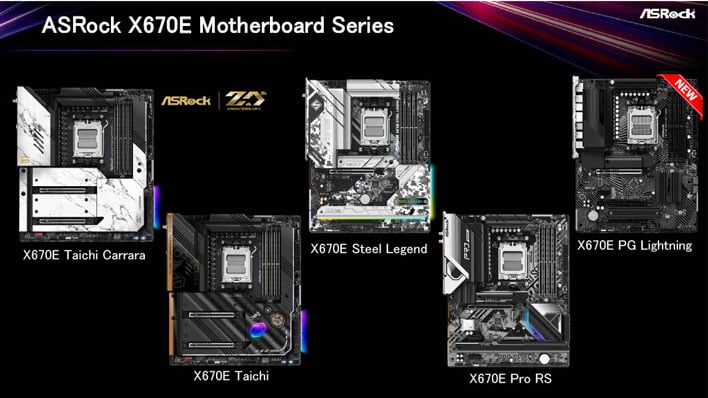 ASRock was less forthcoming about specifics, though it did tout 5 different models of X670E motherboards alone. This stable will include the X670E Taichi Carrara, X670E Taichi, X670E Steel Legend, X670E Pro RS, and X670E PG Lightning. We hope this is an indicator of having some more wallet friendly options in the mix. 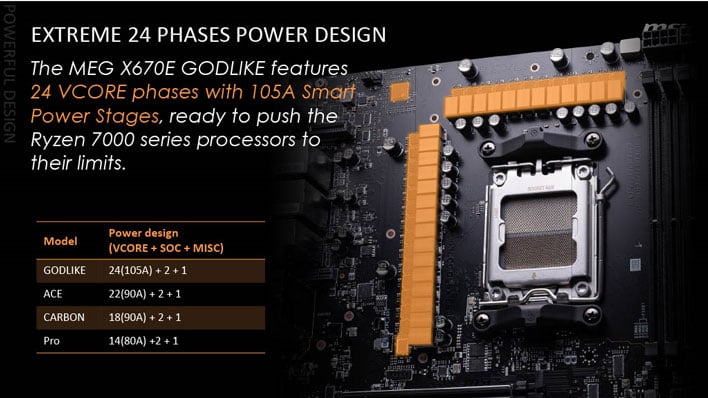 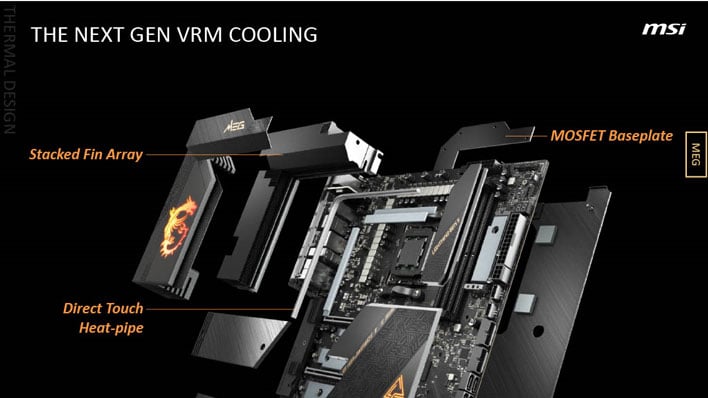 MSI also provided a breakaway look at its cooling VRM setup for its MEG X670E Ace. Along with most of the other boards seen today, it lacks any active cooling which was a mainstay of AM4 motherboards. Not only does removing the fan leave one less thing to break, but it also makes for a quieter system. 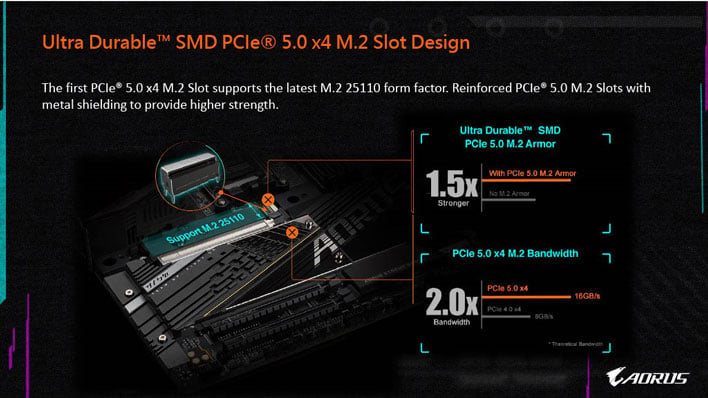 Gigabyte is touting support for a new, longer 25110 M.2 formfactor, which will likely be required by some Gen 5 SSDs. The specification corresponds to a drive that is 25 mm wide and 110 mm long, which is a substantial increase over the prevailing 22 mm by 80 mm formfactor favored by current Gen 3 and 4 SSDs. 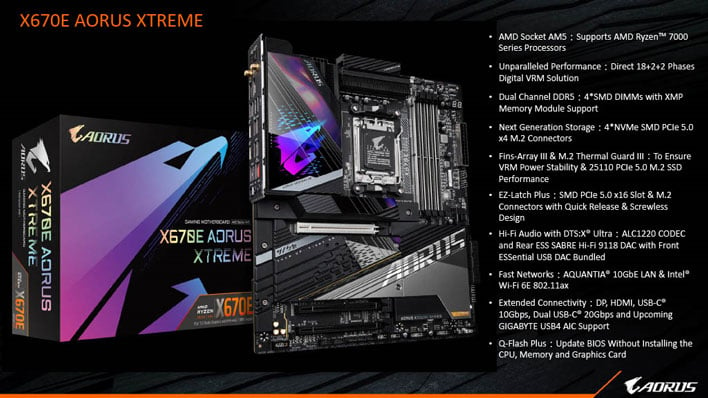 Gigabyte is also in the 10 Gb ethernet arena with their X670E Aorus Xtreme motherboard via a 10GbE Aquantia NIC. The other boards in their lineup, the X670 Aorus Elite AX, X670 Pro AX and X670E Master all utilize Intel 2.5G for their wired networking needs. 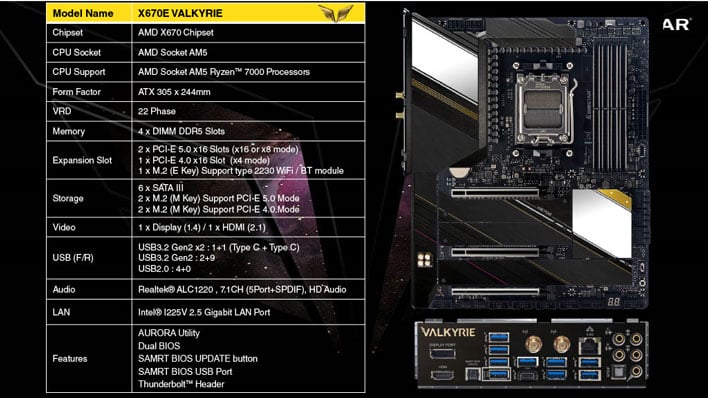 Finally, Biostar has detailed their X670E Valkyrie motherboard. This board also advertises support for 22110 M.2 drives. Biostar highlights 22 phase power delivery (20 + 2, we assume), but not much else stands out.

All of these motherboards should be available alongside Ryzen 7000 series’ launch which is approaching soon. Dr. Lisa Su stated they should ship before Q3 is finished and other leaks have pinpointed mid-September.