ASUS wasted zero time teasing a handful of socket AM5 motherboards for AMD's upcoming Ryzen 7000 series processors, following AMD CEO Dr. Lisa Su's keynote at Computex 2022. She took to the stage to reveal more details about Zen 4 and also formally introduced a trio of next-generation chipsets, which in turn paves the way for motherboard makers to start showing off what they have on tap.
There will once again be three debut chipsets for Zen 4, though instead of X, B, and A, the Ryzen 7000 series is getting a mainstream B650 chipset, an enthusiast X670 chipset with overclocking bells and whistles, and a top-tier X670E Extreme chipset. All three support PCIe 5.0 for storage, whereas the X670 ups the ante with PCIe 5.0 support for graphics as well, and the X670E will offer PCIe 5.0 "everywhere." 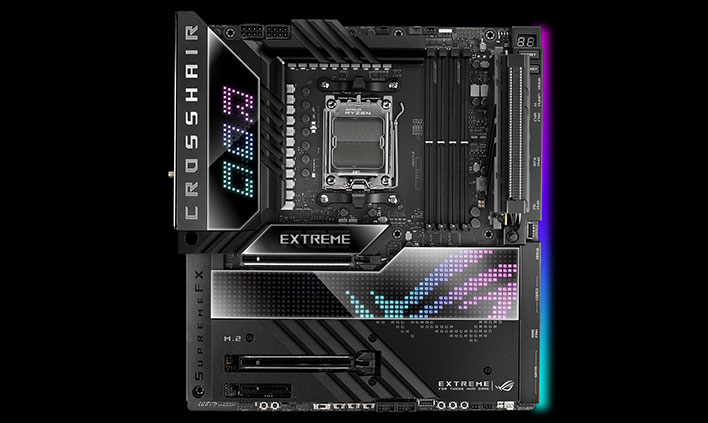 We don't have full details on each chipset yet, though in preparation for Zen 4's retail release, ASUS today announced its flagship offering, the ROG Crosshair X670E Extreme. The "E" in X670E already stands for Extreme, but apparently ASUS wanted to drive the point home that its flagship board is, well, really extreme.
It starts with a robust 20+2 teamed power phase design rated for 110A, with micro-fine alloy chokes, premium 10K black metallic capacitors, and ProCool II power connectors. The general takeaway from all that is it delivers "copious amounts of stable power to your CPU" and should remain stable to facilitate aggressive overclocking.
The flagship board is also big on cooling.
"Today’s processors take advantage of available power and thermal headroom to offer you the best performance at any moment, so cooling isn’t just a matter of comfort—comprehensive cooling makes sure that you get the sustained performance that you demand," ASUS explains.
"The ROG Crosshair X670E Extreme gives you a full suite of options for setting up your dream cooling solution. Six headers for chassis and radiator fans let you establish and control system airflow. Planning to deploy a custom liquid-cooling solution? A wealth of headers for pumps and flow rates give you total command over the coolant coursing through your build," ASUS adds.
Familiar features such as the company's Q-Design, including a PCIe Q-Release button and Q-DIMM latching system, are part of the package. ASUS says it also simplified the installation of M.2 drives with an M.2 Q-Latch so you don't have to fuss with a tiny screw.
Other notable features include...
The ASUS ROG Crosshair X670E Extreme will be available later this year at a price to be determined. In addition, ASUS is prepping at least four other X670/X670E motherboards, including the ROG Strix, ProArt, Prime, and TUF Gaming.