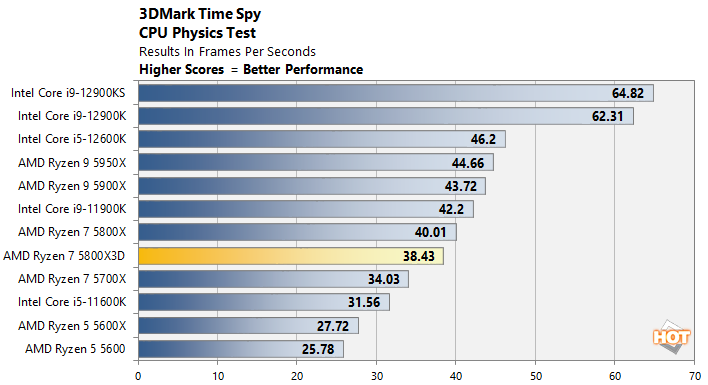 3DMark's Physics test jibes with all of the compute intensive tests we've run on the previous pages. The Ryzen 7 5800X3D finishes just behind the standard Ryzen 7 5800X -- but that's only part of the story with this benchmark. 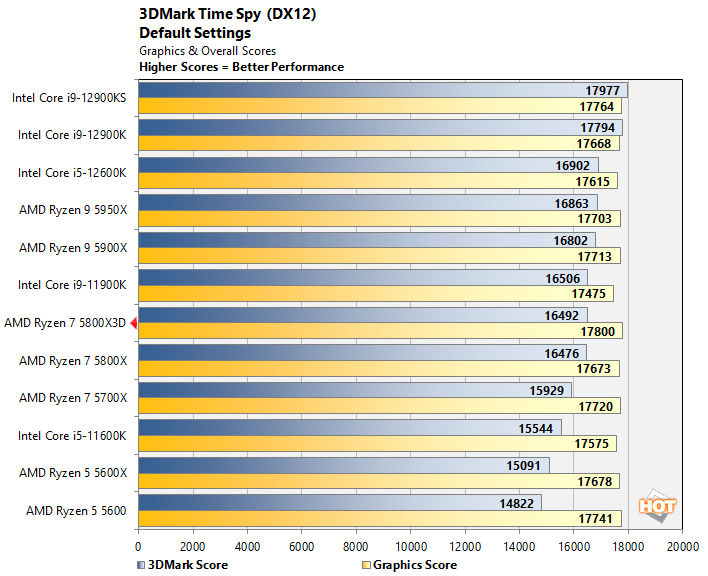 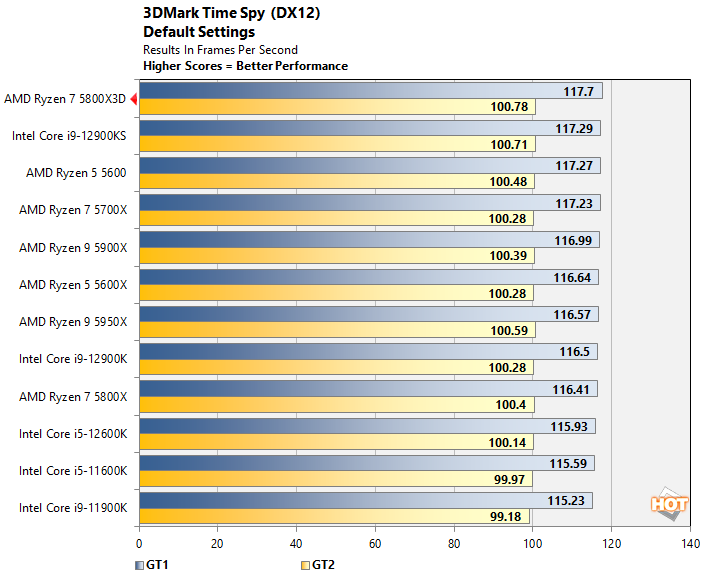 Although its Physics score fell in slightly behind the standard Ryzen 7 5800X, the Ryzen 7 5800X3D put up the highest framerates in the actual game tests used in the 3DMark Time Spy test. And as you'll see, this performance wasn't a fluke. 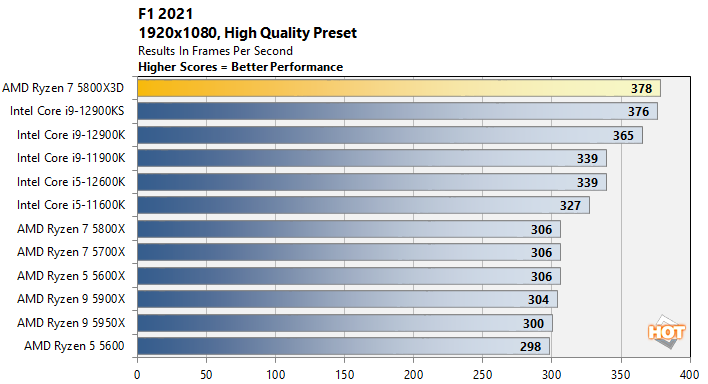 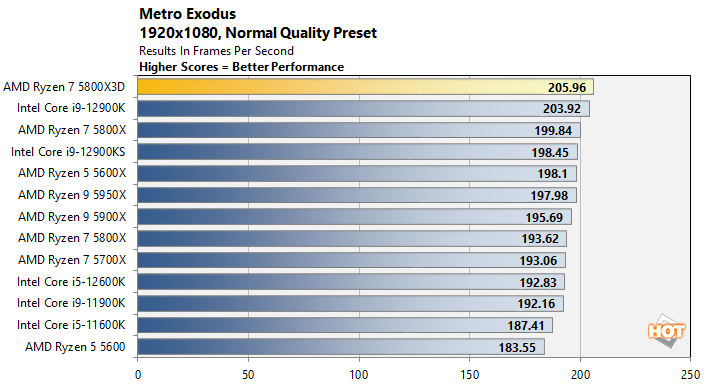 When running a handful of actual games at 1080P with high / normal / medium image quality settings, the Ryzen 7 5800X3D takes the pole position across the board, outpacing all of the other processors we tested. AMD's claims that the Ryzen 7 5800X3D is the best processor for gaming is right in-line with our findings. If you're a gamer with an AM4-based rig itching for an upgrade, the Ryzen 7 5800X3D should offer the highest performance in a variety of titles. 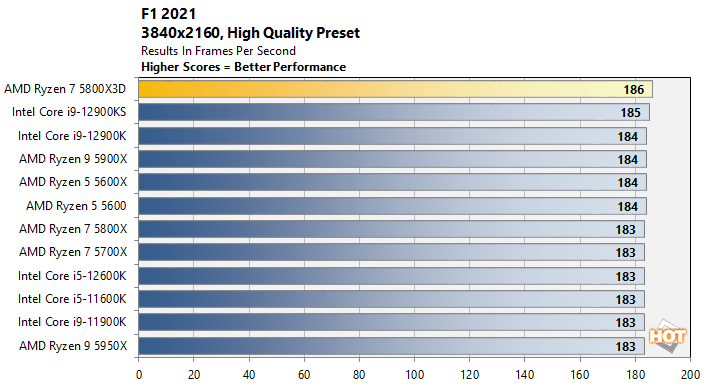 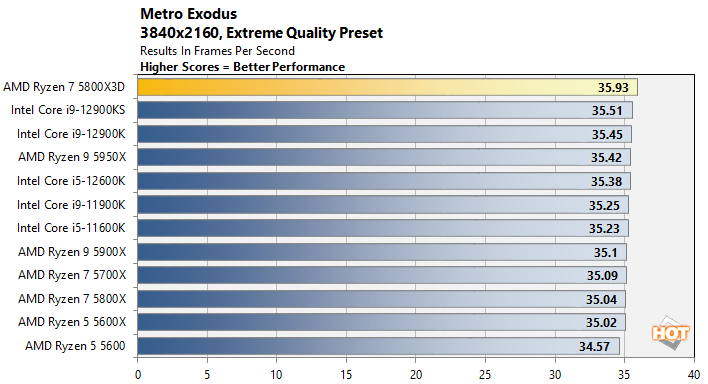 With the resolution cranked up to 4K, and high / extreme image quality settings used in the games, the performance bottleneck shifts onto the GPU and the deltas separating the processors level off significantly. However, the Ryzen 7 5800X3D still manages to pull off another couple of victories, by the slimmest of margins.

Throughout all of our benchmarking and testing, we also monitored how much power our Ryzen 7 5800X3D-powered rig was consuming with a power meter, versus the other systems we used for comparison. 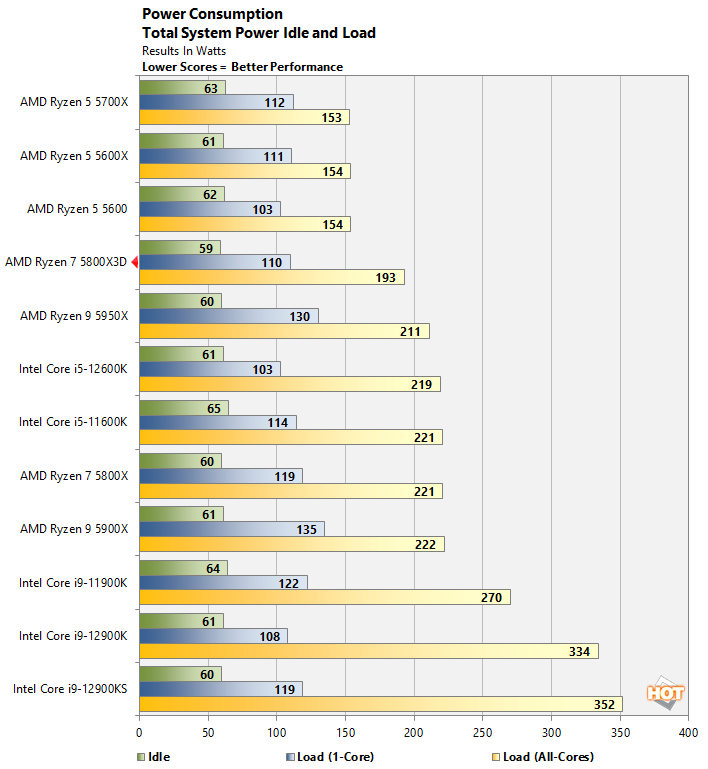 Although the Ryzen 7 5800X3D features much more cache and is leveraging some bleeding-edge manufacturing technology, power consumption is quite good relative to its Zen 3-based counterparts, let alone the Intel processors. The Ryzen 7 5800X3D is one of the more power friendly processor of the bunch, and lands just above the mainstream, 6-core Ryzen 5 5600. For a "gaming" CPU, this is quite a feat. Gaming hardware is typically big, bold, and power hungry, but that is not the case for the Ryzen 7 5800X3D. In terms of its efficiency in gaming workloads versus Intel, there is simply no comparison. The Ryzen 7 5800X3D is far more efficient for gaming than anything Intel has offered for multiple generations.


Under typical operation, the Ryzen 7 5800X3D's frequencies stay within its 3.4GHz base and 4.5GHz boost clocks without fail. And in all of PCMark's workloads, temperatures are a non-issue. The Ryzen 7 5800X3D's temps typically hovered in the 60°C - 70°C range, and peak higher only with sustained, multi-threaded workloads. With the modest power consumption of the Ryzen 7 5800X3D, most quality AM4 coolers will do the trick. User's contemplating an upgrade of their existing socket AM4-based systems shouldn't have to invest in a new cooler to handle this processor.

What about overclocking, though? Well, the Ryzen 7 5800X3D is locked and cannot be overclocked like other Ryzen processors. According to AMD, the Ryzen 7 5800X3D's packaging technology does not offer the same voltage/frequency scaling as the company's conventional chiplet implementations. As such, AMD has optimized the implementation and locked it to prevent CPU core overclocking. However, the chip's Infinity Fabric and memory interface remains unlocked, and can be overclocked. 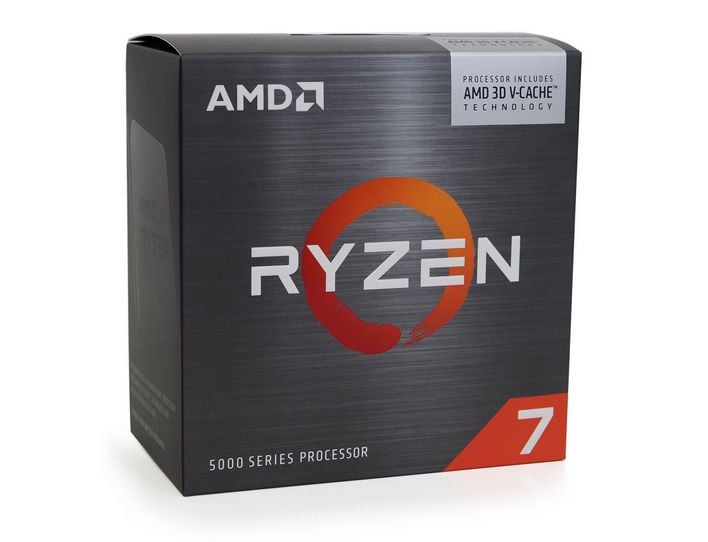 
The timing of AMD's Ryzen 7 5800X3D release is also interesting. Since the release of Intel 12th Gen core processors, we know many gamers have been contemplating the switch to Alder Lake. Though Intel has been aggressive with pricing on many of the mainstream 12th Gen processors, like the excellent Core i5-12600K, switching to a new platform means getting a new motherboard, new cooling, and potentially new RAM, along with that new processor. That’s not the case with the Ryzen 7 5800X3D, which will drop into most socket AM4 motherboard after a BIOS update. It is such a low-friction upgrade for existing socket AM4 owners that it makes perfect sense for folks looking to boost the performance of their games. We suspect the Ryzen 7 5800X3D is just what the doctored ordered for current AMD gamers, to tide them over until we all find out what Socket AM5, Zen 4 and the Ryzen 7000 series is all about.

The AMD Ryzen 7 5800X3D will be available starting on April 20th for $449. That’s a full $100 more than the standard Ryzen 7 5800X, but significantly more affordable than competitive processors like the Core i9-12900K or KS. There are some productivity and content creation performance trade-offs to be considered with a processor like the Ryzen 7 5800X3D versus some others in its price segment, but for hardcore gamers already rocking socket AM4 it’ll likely be an easy choice.