Do you ever think your browsing habits may be what are causing a bit of your system to slow down? Well, Microsoft thinks so, and that's why the Redmond outfit designed sleeping tabs for Microsoft Edge.

The idea behind sleeping tabs, which we talked about in September of 2020, is to make it so that the tabs that are not actively being used by the browser do not start to gobble up more RAM. The benefit here is that because things are not operating as much in the background it helps reduce the overall PC load. Additionally, the reduced interaction prevents things like the next set of ads loading, another bit of a video loading unnecessarily, and other factors that can definitely help. For laptops this is fantastic for battery life.
.

Use sleeping tabs to save resources? You aren’t alone! Over the past 28 days on Windows devices, we slept 6 billion tabs resulting in a savings of 273.7 Petabytes of RAM. That’s roughly 39.1 megabytes saved per tab. 😲 pic.twitter.com/hgTcpcMwvh

Just how much RAM can be saved though? Well, according to a recent tweet by Microsoft, the average data savings per tab is a little under 40 megabytes per tab over 28 days. While this number doesn't seem like a lot, when you consider how many tabs a user might have open, that can grow exponentially quick. As such the tweet also mentions that when bringing it up to 6 billion tabs automatically slept, over 273 petabytes of data was saved across all Microsoft Edge users. Those are some impressive numbers.


Ultimately the question becomes whether 40MB of RAM saved per-tab on your device will actually affect you. In some cases, if you're like us, who often have numerous resources open while researching our stories, it might actually help. If you don't, it'll likely be negligible at best. If you're on a computer that still has limited RAM overall, it might make a difference. Even then, your device might have enough RAM where that excess usage when a lot of tabs are open creates next to no impact on the performance of your device. 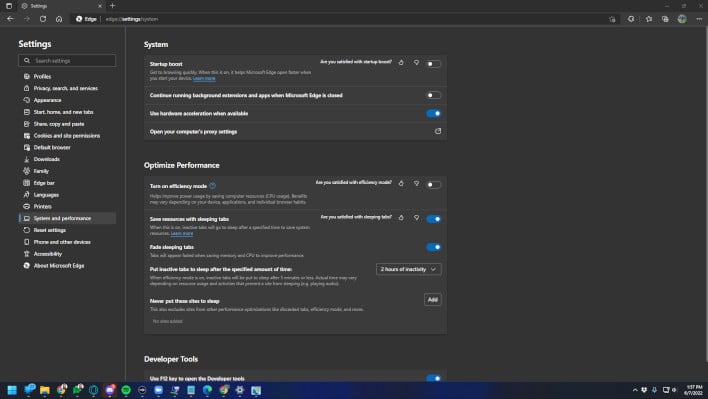 
Today Sleeping Tabs are enabled by default for all installations of Microsoft Edge, automatically putting tabs to "sleep" after two hours. However you can modify your settings by placing edge://settings into your browser address bar, then going to System and performance then Optimize Performance. You could also turn on Efficiency Mode for even more performance improvements.