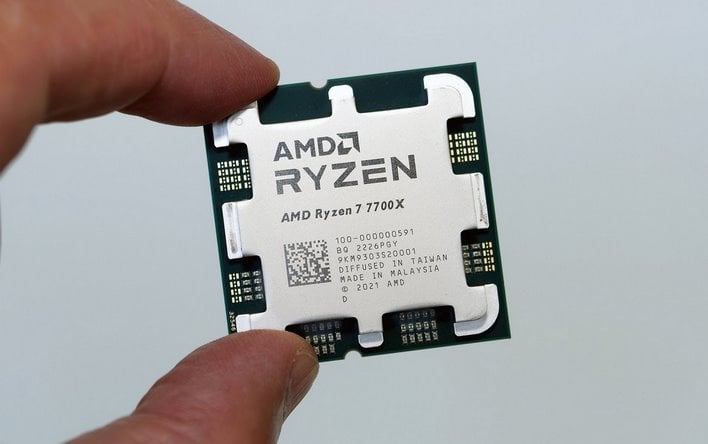 In our custom LAME XP MP3 encoding test, we convert 16, large uncompressed WAV files to the MP3 format, which is a common use case for many end users, to provide portability and storage of their digital audio content. The LAME engine is an open-source MP3 audio encoder that is used widely in a multitude of third party applications.

For this test, we created 16-copies of our own 223MB WAV file (an 11-minute Grateful Dead jam) and then converted it to MP3 format using the multi-threaded LAME XP tool. Processing times are recorded below, listed in minutes:seconds. Shorter times equate to better performance. 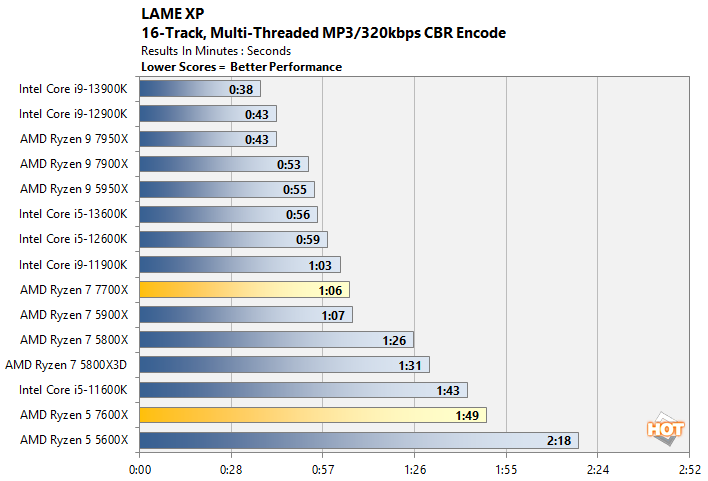 This is another benchmark where we see extremely rich competition between Intel and AMD, although these midrange CPUs see less impressive numbers than some of their many-core cousins. Still, the Ryzen 7 7700X's 8 cores allow it to essentially match the twelve-core Ryzen 7 5900X, while the Ryzen 5 7600X completes the test some 27% faster than its previous-generation predecessor.
That still puts it behind the Core i5-11600K, though, to say nothing of the Core i5-12600K and Core i5-13600K, both of which are well ahead. This benchmark heavily favors integer math, where Intel's E-cores are fairly strong, and so the extra puny cores are in fact not-so-puny in this particular test.

The multi-threaded HWBOT x265 Benchmark is based on the open source x265 encoder that leverages modern CPU instructions to speed up video encoding. We tested the CPUs represented here with the 64-bit encoder using the default 1080p and 4K workloads. 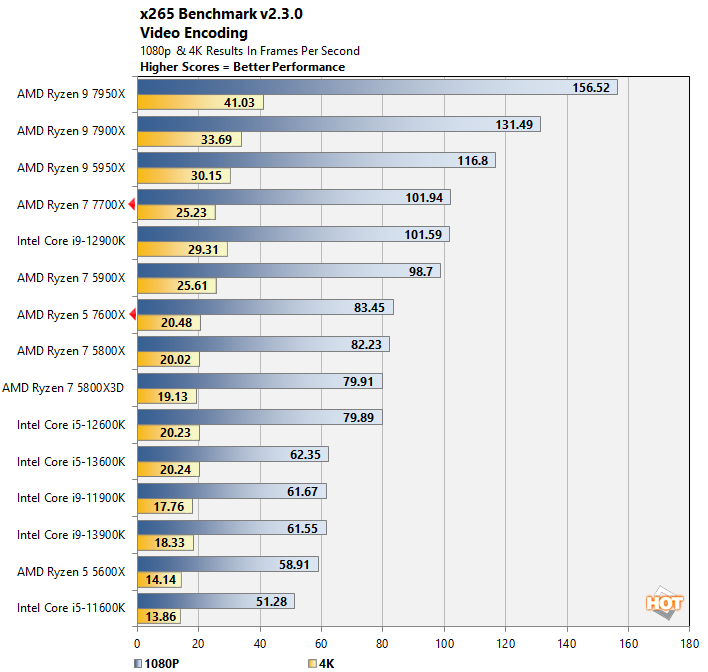 Meanwhile, unlike LAME above, the x265 encoder is a heavily mixed workload that can make use of all kinds of SIMD instructions, including AVX-512. It's in part for this reason that we see the many-core Ryzen 7000 processors clustered at the top of the chart, because they ironically support the latest x86-64 ISA extension where Intel's 12th- and 13th-generation CPUs do not.
We do have to note that it seems like the benchmark has a problem of some sort on the 13th-generation Core processors. It's possible that due to the CPUs being newer than the benchmark, it didn't recognize them and initialize the correct SIMD paths.
Regardless, x265 encoding on Zen 4 is fast, especially in lower resolutions. We see Intel's Alder Lake parts claw back some performance compared to AMD in 4K resolution, and that's likely because the higher resolution makes it easier to spread out work to multiple cores; we also see larger gains there (percentage-wise) on the high-core-count AMD CPUs.

The Blackmagic RAW Speed Test is a CPU and GPU benchmarking tool that tests full-resolution Blackmagic RAW video decode performance. The tool can be used to evaluate the performance at various resolutions and bitrates on the CPU or using OpenCL on a GPU. We're reporting two results here, both using 8K resolution, but at differing bitrates and compression levels. 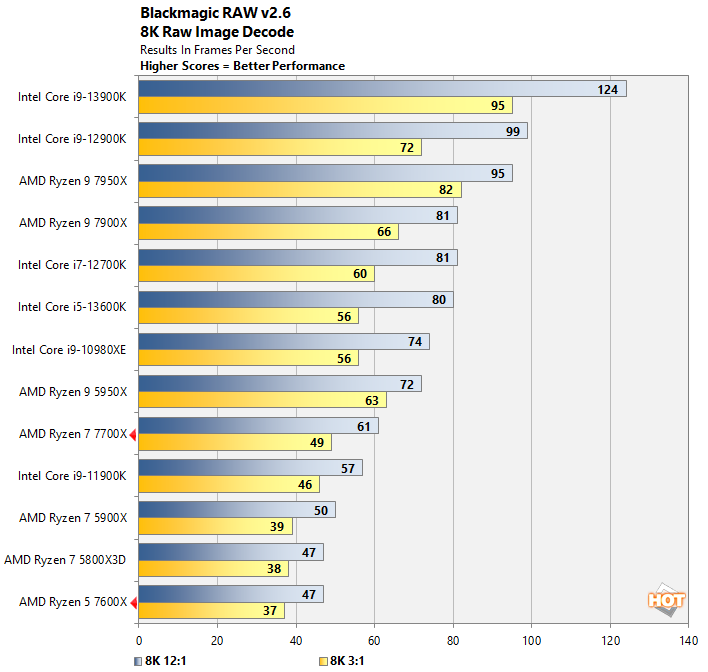 In Blackmagic's RAW test, we see a pattern again more like LAME, earlier, where it wants lots of cores with good integer throughput. Unsurprisingly, Intel's recent many-core CPUs dominate here, but AMD's own parts put up a great showing. The single-threaded performance of Zen 4 allows the Ryzen 7 7700X to come within striking distance of its 16-core predecessor, and while the Ryzen 5 7600X comes in at the bottom of our list, note that it has the lowest core-count on the chart, and comes in scant inches from the Ryzen 7 5900X with twice as many cores.

Cinebench is a rendering performance test based on Maxon's Cinema 4D, which is a 3D rendering and animation tool suite used by animation houses and producers like Sony Animation and many others. It's very demanding on system processor resources, and it can utilize any number of threads, which make it an excellent gauge of computational throughput. This is a multi-threaded, multi-processor aware benchmark that renders and animates 3D scenes and tracks the length of the entire process. The rate at which each test system was able to render the entire scene is represented in the graphs below. 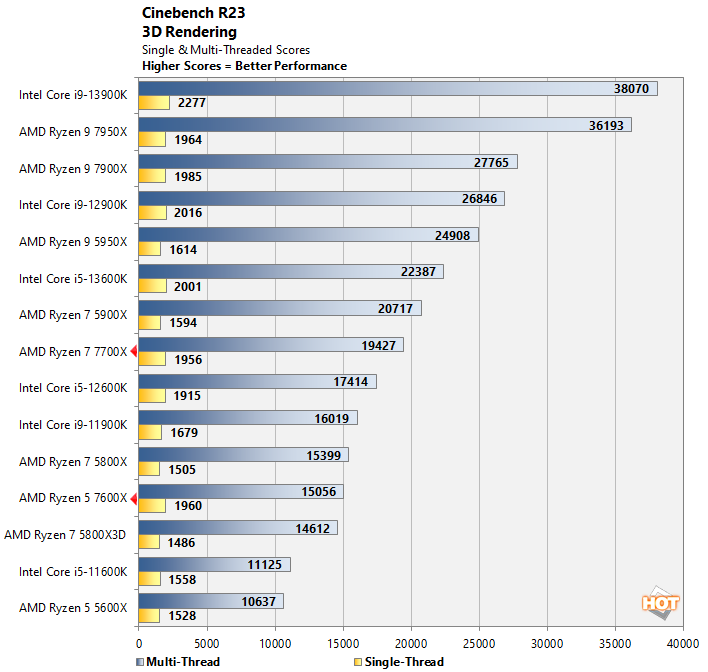 Cinebench is based on Intel's Embree renderer, and as a result, it does favor Intel a bit, which you can see in the single-threaded results. Compare the Cinebench results for Zen 4 processors to other benchmarks, such as Geekbench, and you'll see the disparity. Regardless, AMD's processors usually do well in multi-threaded Cinebench owing to their mix of high core counts and solid single-threaded performance.

Neither of the Ryzen 5 or Ryzen 7 processors we're testing today have particularly high core counts, but they still comport themselves very well with performance that reliably beats processors with more cores. The eight-core Ryzen 7 7700X's showing is particularly impressive, coming close to the 12-core Ryzen 9 5900X and 14-core i5-13600K while outright beating the ten-core i5-12600K. 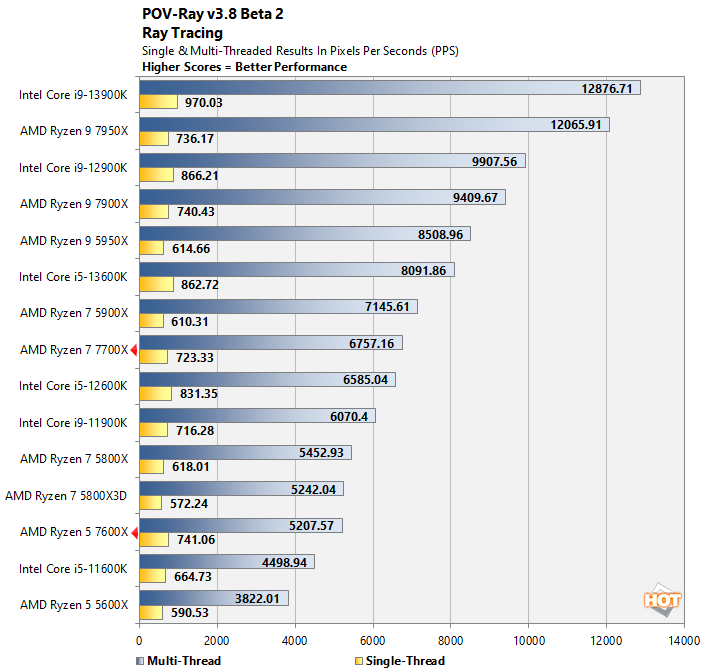 While the single-threaded performance of AMD's Zen 4 core is typically comparable to Intel's 12th- and 13th-generation parts, it stumbles here quite noticeably.

That results in a multi-threaded performance deficit, although the difference isn't as much as you might expect. It seems like POV-Ray really doesn't care for Intel's E-cores too much. That's a given in light of the floating-point-heavy nature of POV-Ray; while Intel's Gracemont E-cores are surprisingly capable in integer workloads, they fall down somewhat in floating-point math.

Blender is a free and open source 3D creation suite that can handle everything from modeling, rigging, and animation to simulation, rendering, compositing and motion tracking. It has a purpose-built benchmarking tool that will track the time it takes to complete rendering a particular model (or models). We used the CPU-focused benchmark with all three models currently available... 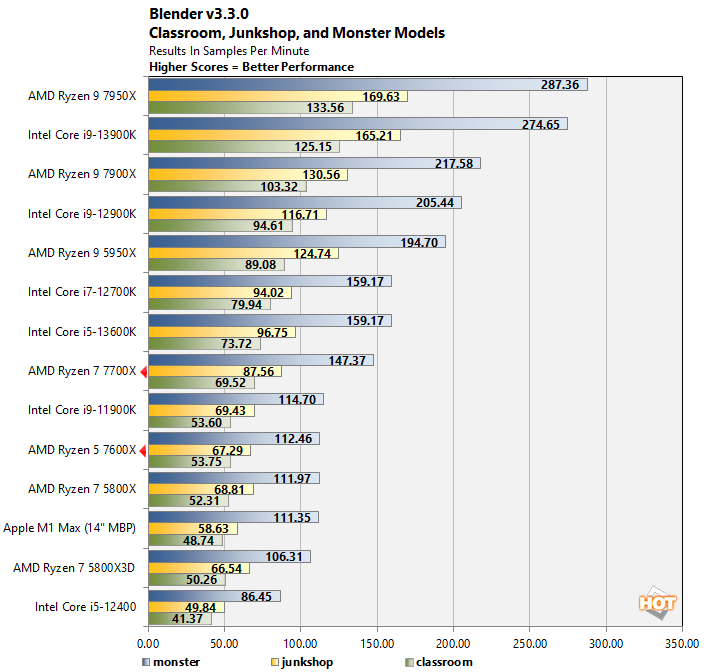 By comparison, Blender is one of our fairest benchmarks. AMD takes the top spot here, but our mid-range eight- and six-core Zen 4 CPUs don't fare nearly as well. The Ryzen 7 7700X does well against the Core i5-13600K considering it's suffering under a six-core deficit, but that processor is $100 more expensive than the Intel competition. Likewise, the Ryzen 5 7600X does pretty good considering it's only working with six cores, but that's really not enough CPU for this kind of work. Frankly, neither is eight. 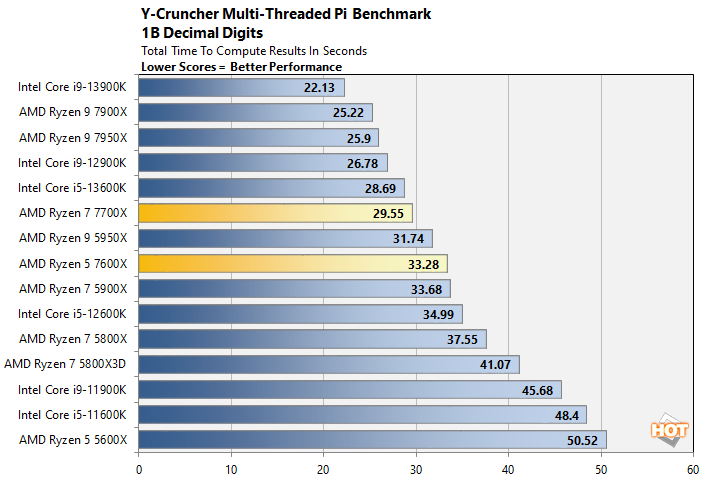 Despite being multi-threaded, Y-Cruncher is still very sensitive to single-threaded performance and cache latency. AMD's many-core Zen 4 CPUs do very well here, and the Ryzen 7 and Ryzen 5 CPUs look great in comparison to their previous-generation predecessors, but that darn Core i5-13600K is really throwing a wrench in the works here. Still, it's crazy to see a six-core CPU come in just behind a 16-core CPU on a multi-threaded test like this. 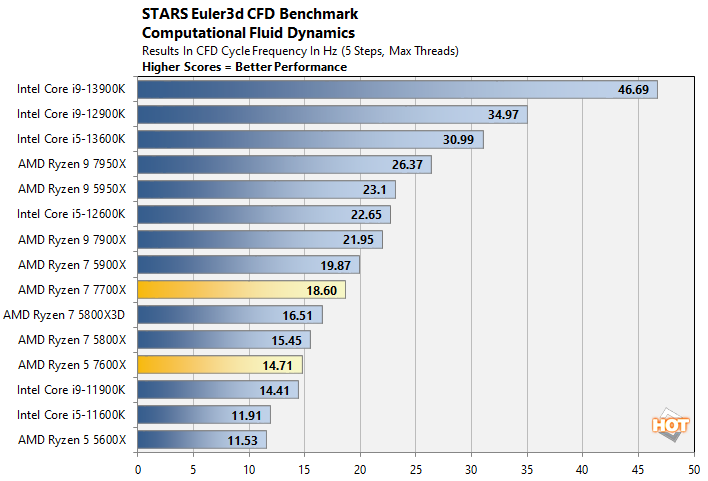 Computational Fluid Dynamics is finally starting to be done on GPUs, which means these results are rapidly becoming less relevant. At least, that's probably what AMD would like us to say, because it doesn't fare particularly well here. CFD is an unusual case where memory performance matters as much or more than CPU speed, and AMD takes a beating here as a result.