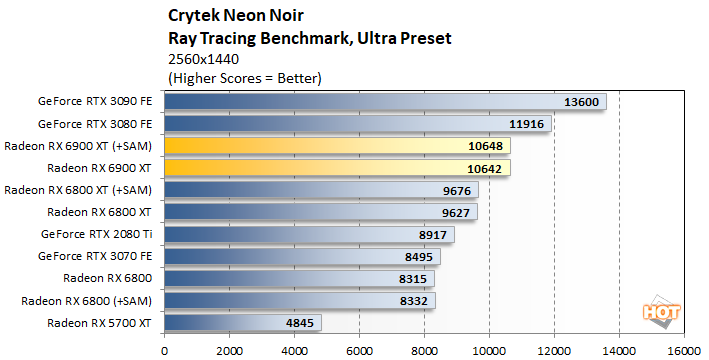 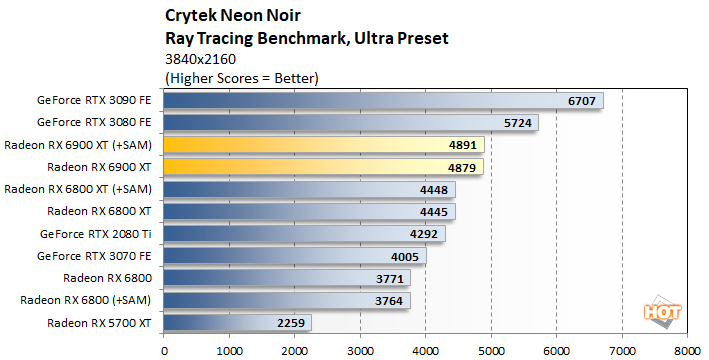 The Radeon RX 6900 XT performed well relative to its Big Navi-based peers with Crytek's proprietary ray tracing workloads here, but couldn't hang with the high-end Ampere-based GeForces. The GeForce RTX 3090 outruns the Radeon RX 6900 XT by over 37%, and the RTX 3080 finishes over 1,000 points ahead. 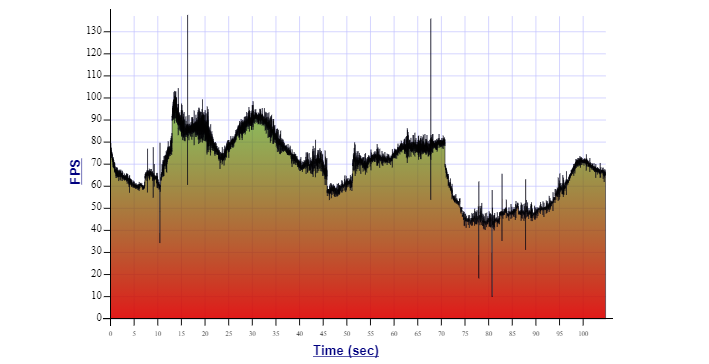 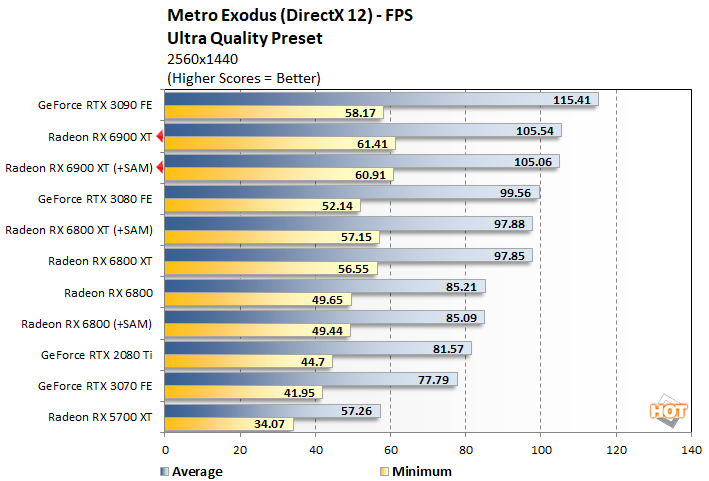 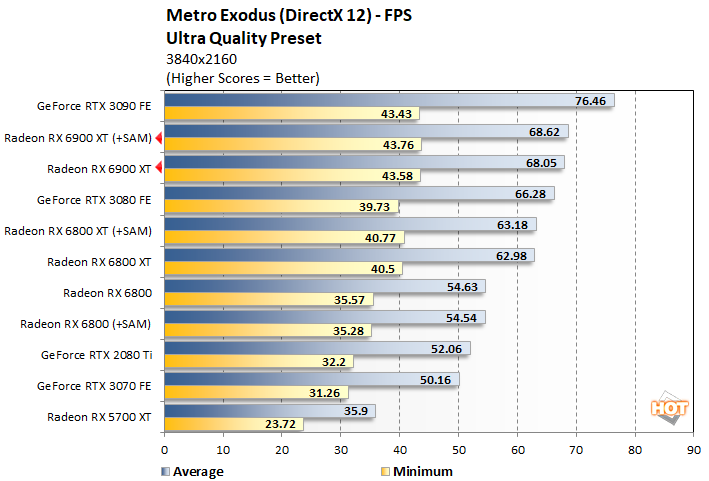 Using the Ultra quality preset in Metro Exodus, the Radeon RX 6900 XT outpaces every other card we tested -- at both resolutions -- except for the GeForce RTX 3090. 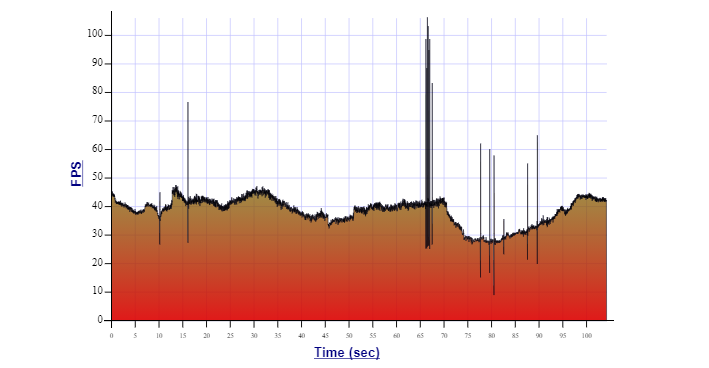 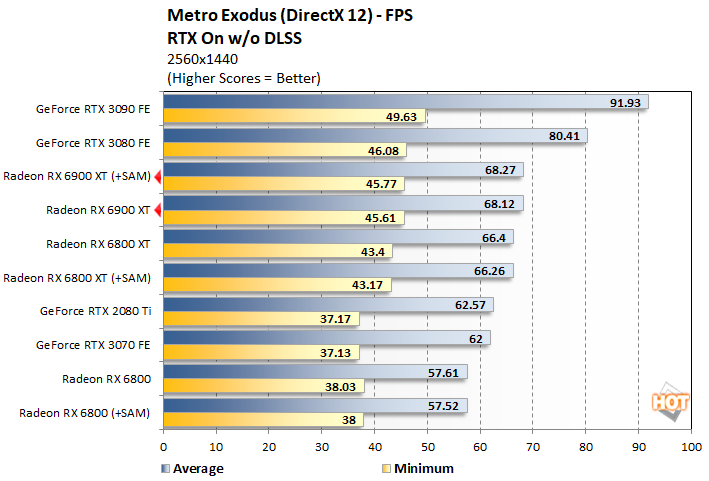 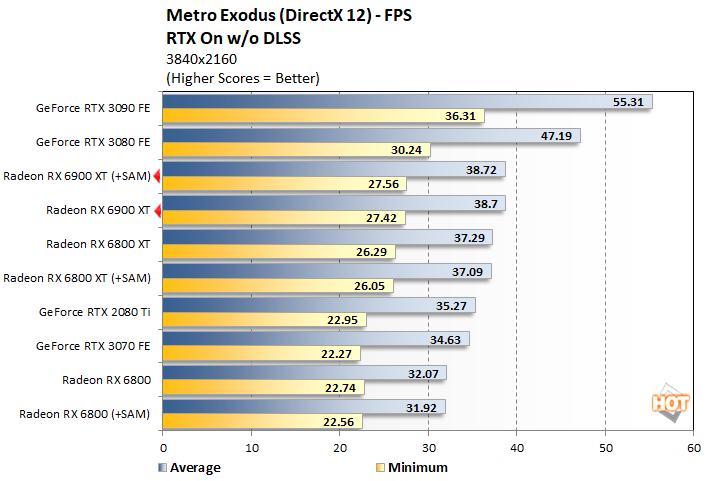 When using the RTX preset (which enables DXR ray tracing effects) in this game, the Radeon RX 6900 XT drops down a few rungs and ends up trailing the top-end GeForces by wide margins. 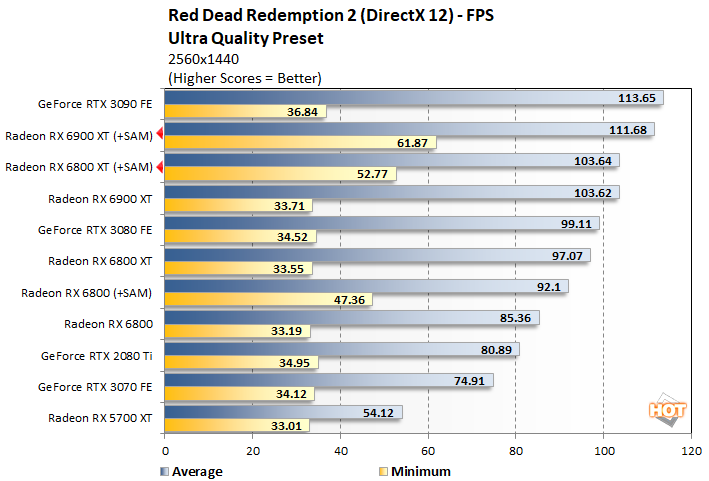 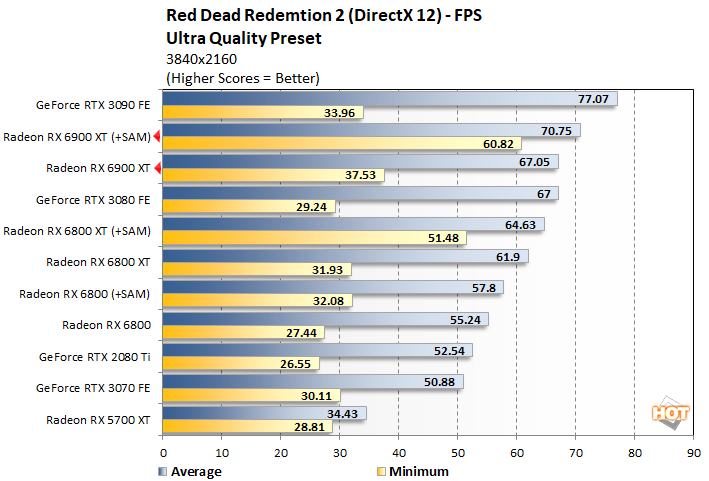 Enabling SAM in Red Dead Redemption 2 not only gave the Radeon RX 6900 XT a boost in average framerate, but also significantly improved its minimum framerate. Overall though, we saw more of the same in this game. The Radeon RX 6900 XT is blazing fast, but it can't quite catch the GeForce RTX 3090. 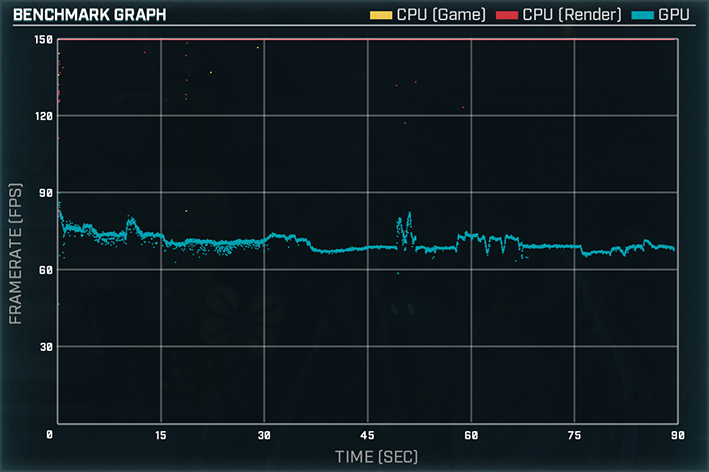 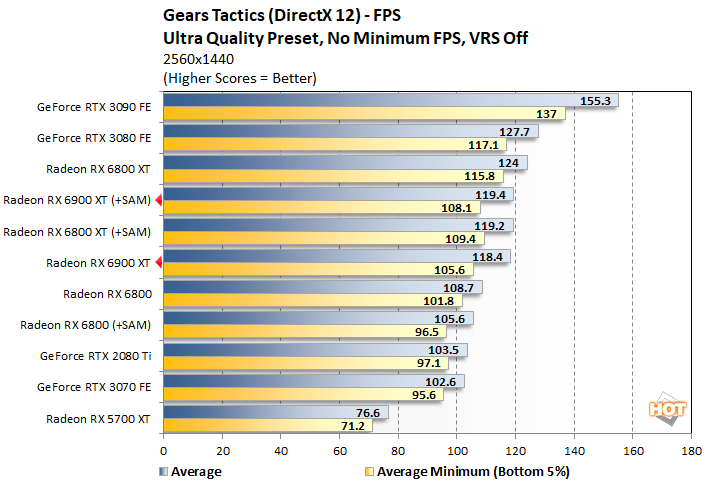 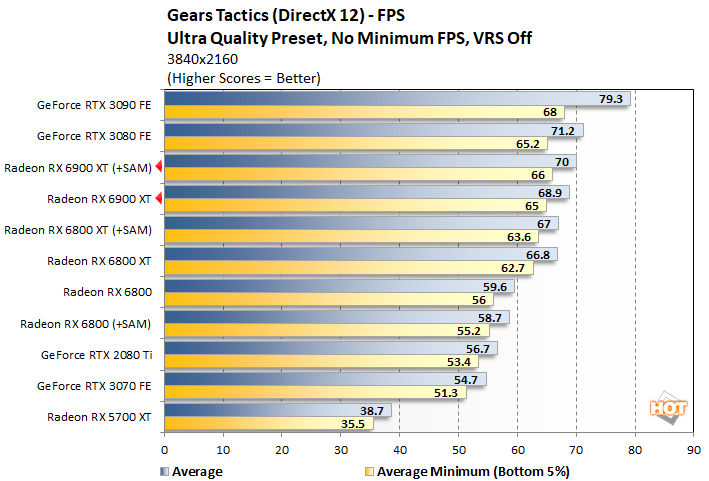 AMD's Smart Access Memory doesn't provide much benefit in this particular game. Regardless, even with a slight performance boost, the Radeon RX 6900 XT isn't able to catch the high-end GeForce RTX 30-series cards here, at either resolution. 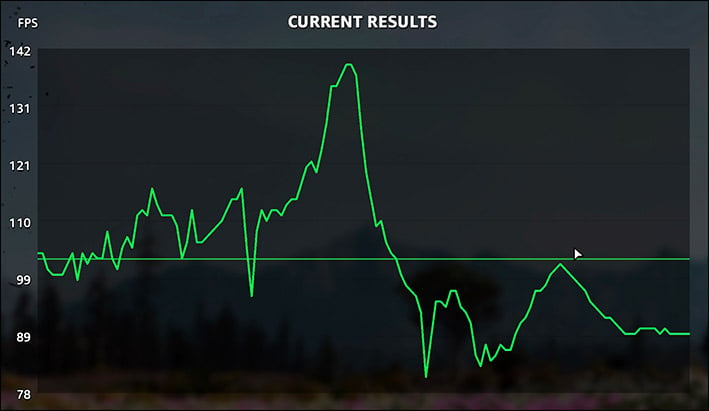 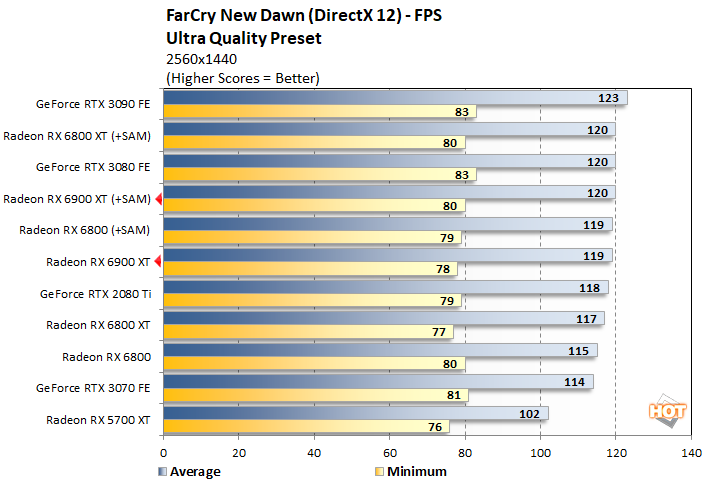 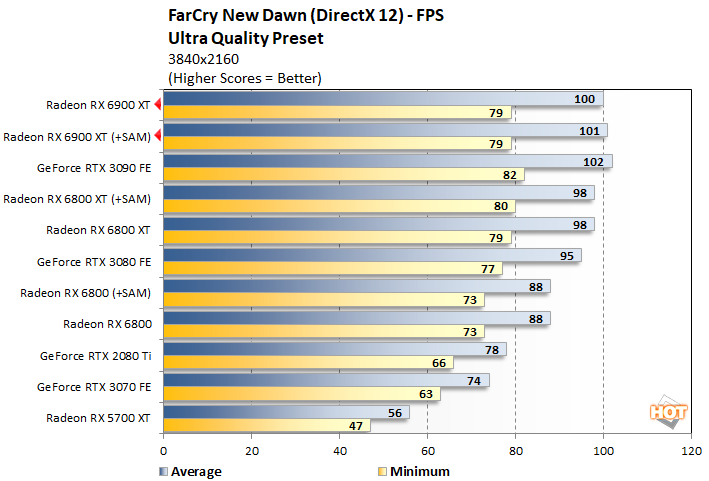 FarCry New Dawn was mostly CPU limited at 1440p, so there's not much to separate the high-end cards at that resolutions and we saw some wonky trends. With the resolution cranked up to 4K, however, the Radeon RX 6900 XT scores a first place finish, outpacing every other card we tested. 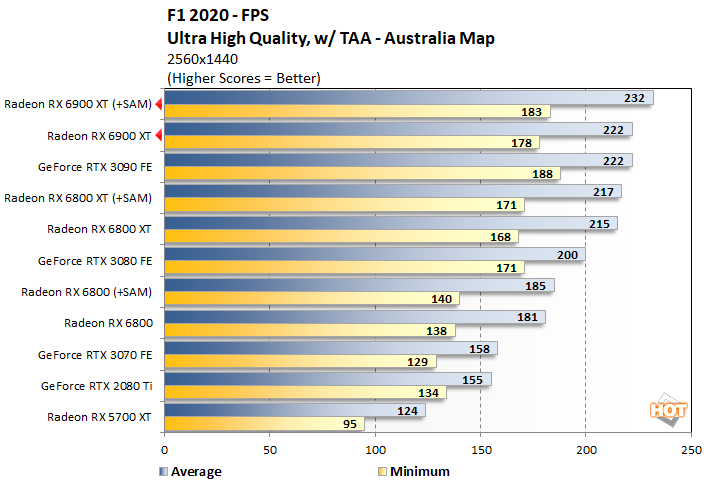 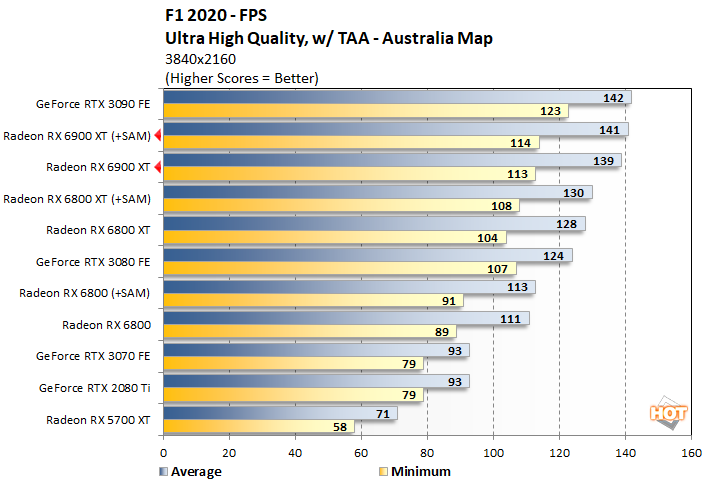 The pecking order in F1 2020 looks just like FarCry New Dawn at 1440P, with the Radeon RX 6900 XT finishing on top. With the resolution increased to 4K, however, the GeForce RTX 3090 comes roaring back to finish in the lead -- by a measly 1 FPS.
PREV PAGE NEXT PAGE