AMD Radeon RX 6900 XT: The Most Powerful Radeon Ever 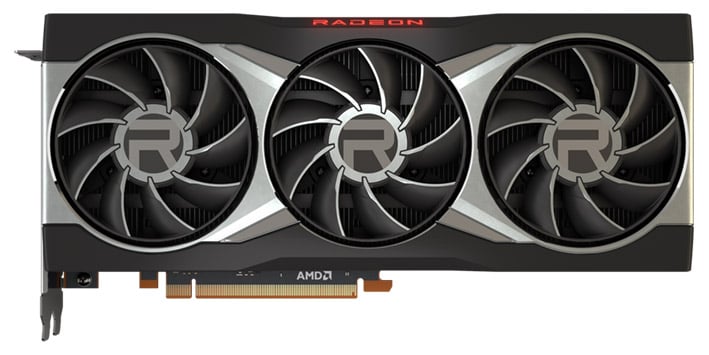 A couple of weeks back, we were able to show you AMD’s Radeon RX 6800 and Radeon RX 6800 XT in action, across an array of games and applications, in two different systems, with and without Smart Access Memory enabled. In that piece, we came to the conclusion that AMD’s latest high-end gaming GPUs are worthy adversaries for their NVIDIA GeForce RTX 30 series counterparts – the GeForce RTX 3070 and 3080. Today, however, we get to move all the way up the stack and show you Big Navi’s, Big Daddy, the Radeon RX 6900 XT, which AMD claims can go head-to-head with NVIDIA’s powerful GeForce RTX 3090.

Here’s a quick comparison between AMD’s top-end GPUs from the last few generations of 7nm products, to give you all the 10,000 foot view. Take a peek at the speeds and feeds and then we’ll dig in a little deeper to find out what AMD’s flagship Radeon RX 6900 XT is all about. 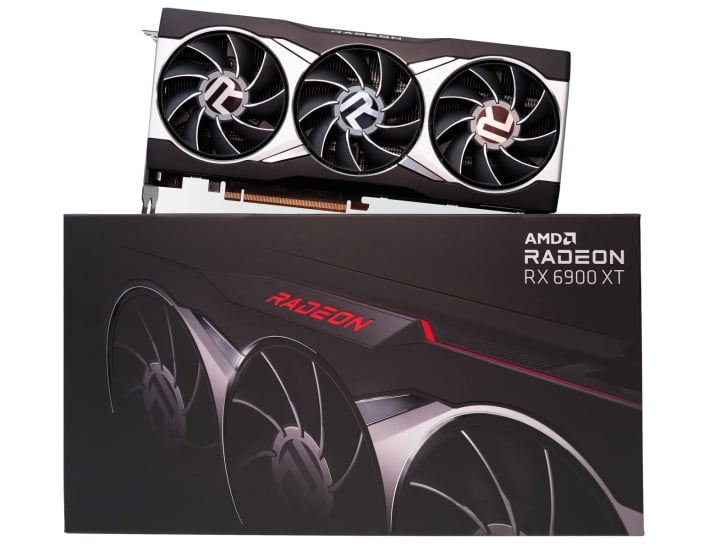 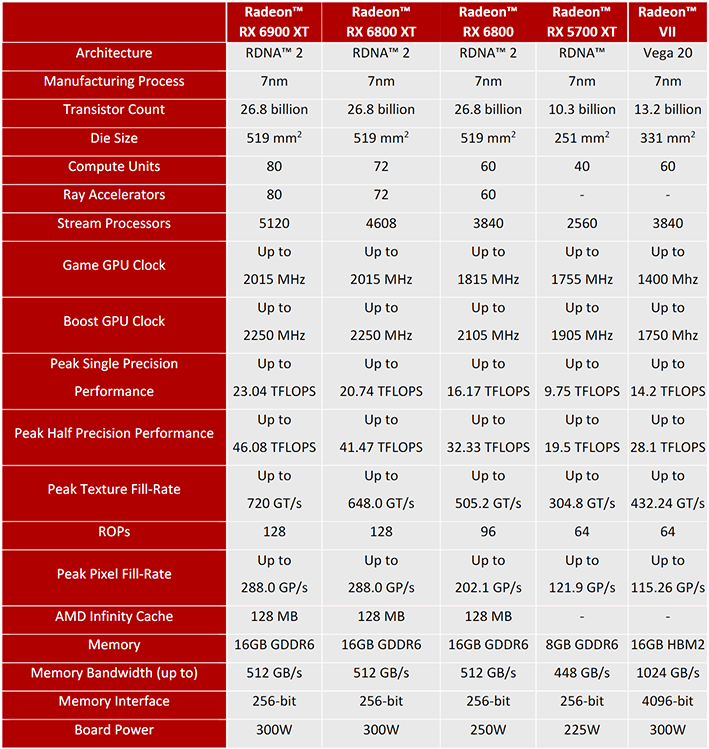 Find The AMD Radeon RX 6900 XT @ Amazon.Com
Before we dig into the nitty-gritty, we strongly suggest checking out our Radeon RX 6800 and Radeon RX 6800 XT launch article. In that piece, we provide additional details regarding the Navi 21 GPU and the RDNA2 architecture at the heart of the Radeon RX 6000 series. We discuss the new Infinity Cache and the GPU’s new cache hierarchy, the new Compute Units (CU) and their integrated Ray Accelerators, and Smart Access Memory (SAM), among many other aspects of the product. If you’d like the additional technical detail, you’ll find it all there – we won’t be rehashing it again here. 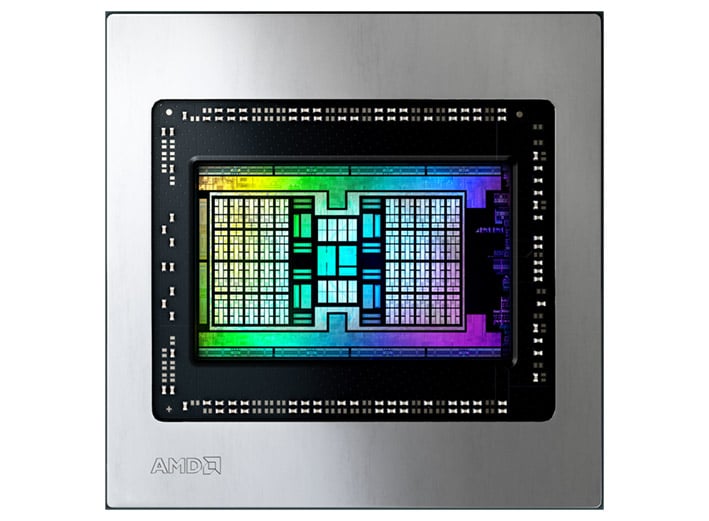 As we’ve mentioned, the Radeon RX 6900 XT built around a fully-enabled Navi 21 RDNA 2-based GPU, which is manufactured on TSMC’s 7nm process node. The GPU is comprised of roughly 26.8 billion transistors and has a die size of 519mm2. That’s a much bigger chip than what powers the current Radeon RX 5700 XT, which is 10.3 billion transistors with a relatively paltry 251 square millimeter die. It’s bigger than the 13.2 billion transistor Vega-based Radeon VII too.

According to AMD, the overarching goal of its RDNA 2 architecture was to boost performance and efficiency and help push AMD back into a competitive position at the high-end of the gaming GPU market. To pull it off, RDNA 2’s compute units offer double the performance (or more) of the CUs in the original Navi-based Radeon RX 5700 XT, with an approximate 50% performance-per-watt uplift. In addition, RDNA 2 offers a leading-edge feature set that includes support for DirectX 12 Ultimate and all that comes with it, including Variable Rate Shading, Mesh Shaders, Sampler Feedback, and ray tracing. Microsoft’s DirectStorage API, for faster game loading direct from SSD to GPU memory, will be supported as well, though it will take a while before support for DirectStorage arrives in PC games. 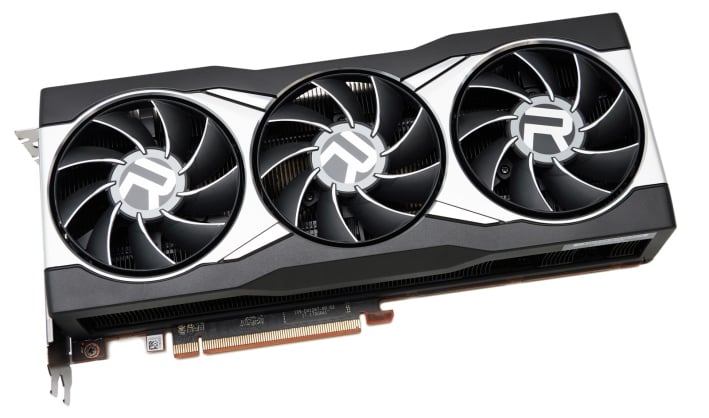 The full configuration of the Navi 21 GPU powering the Radeon RX 6900 XT features 80 CUs. The Radeon RX 6800 and Radeon RX 6800 XT have the same physical GPU at their core, but scaled down to address lower price points.

The Radeon RX 6900 XT’s game and maximum boost clocks are similar to the 6800 XT’s. Its game clock should hover around 2,015MHz and the Boost clock 2,250MHz. AMD claims that they’ve binned the GPUs on the 6900 XT, however, to ensure they’re using the best-of-the-best and that they’ll operate at a more aggressive frequency / voltage curve. Although it has more CUs and the card should maintain somewhat higher clocks across the curve, it does so at slightly lower voltages. As such, though it's more powerful, the Radeon RX 6900 XT has the same rated board power as the 6800 XT. The additional CUs also mean increased compute performance over its siblings, to the tune of 23.04 TFLOPS of single-precision compute performance (46.08 TFLOPS half-precision). 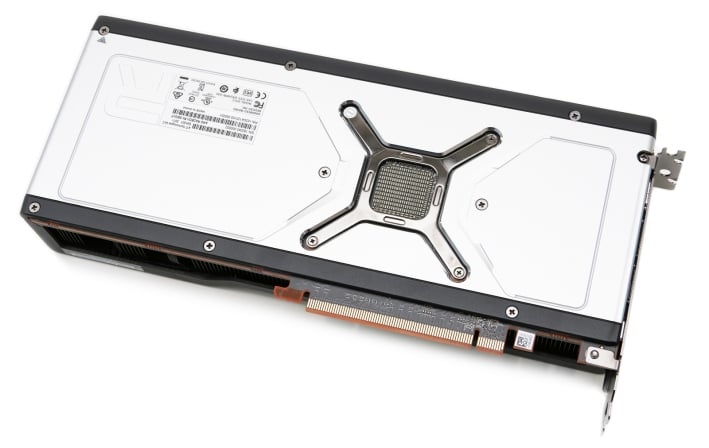 All of the cards in AMD’s Radeon RX 6000 series have similar designs, with a stylized cooler featuring triple axial fans, mounted inside a die-case aluminum shroud. A die-cast aluminum frame and backplate add some structural rigidity and help aid in cooling as well. That shroud sits atop a massive vapor chamber that runs the entire length of the PCB. The only difference between the coolers on the cards in the Radeon RX 6000 series is their height – the Radeon RX 6800 is two-slots wide, while the Radeon RX 6800 XT and 6900 XT you see here are two-and-a-half slots. The heatsink fins and shroud are simply taller on the higher-end cards, to add some additional surface area. All of the cards are the same length and height (267mm x 120mm), however.

The Radeon RX 6900 XT is built on a 14-layer PCB, with four 2oz copper layers, and 15 power stage phases – two of which are dedicated to the memory. The cards feature dual, standard 8-pin PCI Express power connectors and built-in RGB lighting controls. Although perhaps not quite as elegant as the cooling solution on GeForce RTX 30-series Founders Edition cards, the Radeon RX 6900 XT is easily the most premium graphics card AMD has produced to date in our opinion.

When we first got our hands on the AMD Radeon RX 6800 and RX 6800 XT, the software for controlling the latter’s built-in RGB lighting wasn’t quite ready for prime time. We did get the software in time for the launch of the Radeon RX 6900 XT though... 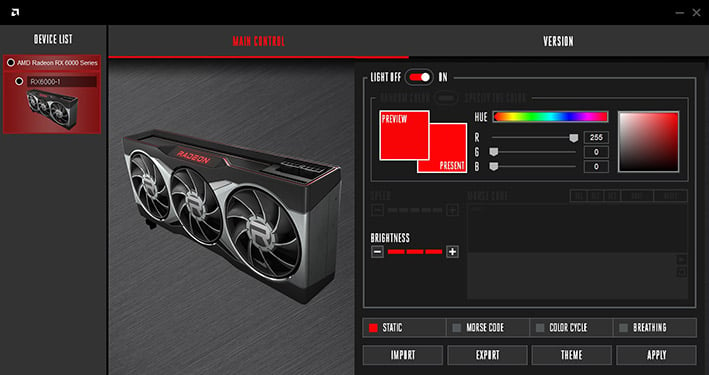 AMD’s Radeon RGB controls are clean and straightforward. Users can choose from and array of lighting modes, and pick any color in the rainbow. The individual Red, Green, and Blue channels can be altered, along with the brightness and speed of any effects. 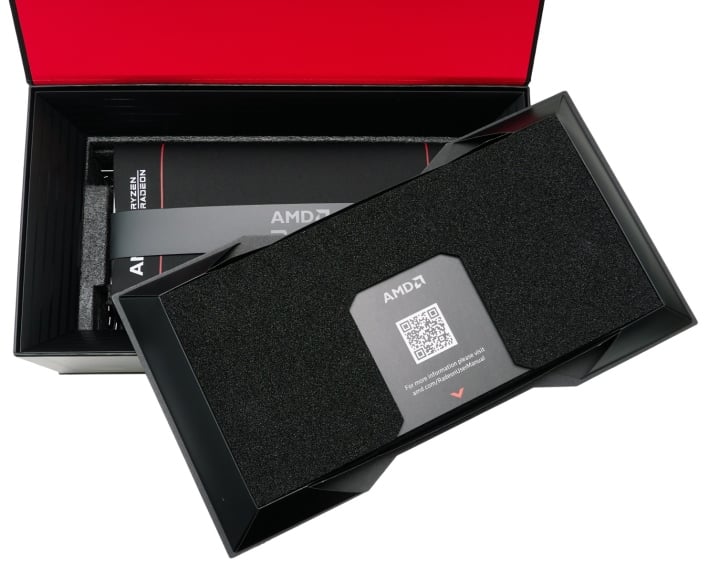 We should also mention an addition to the Radeon RX 6900 XT’s bundle. Although the boxes look similar, save for the model number branding, the Radeon RX 6900 XT comes wrapped in a slick, oversized Radeon mousepad. Underneath the lit pack, there’s a Radeon “R” Cherry MX compatible keycap included too.

And now for what you’ve all been waiting for – some benchmarks...
NEXT PAGE