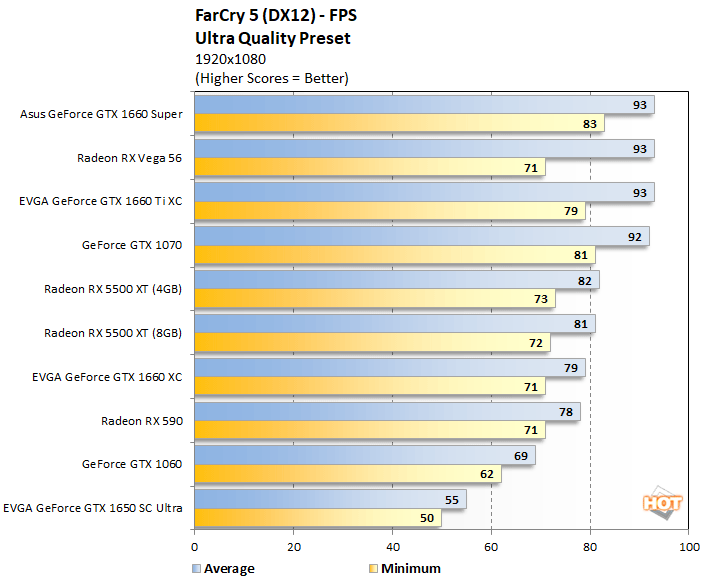 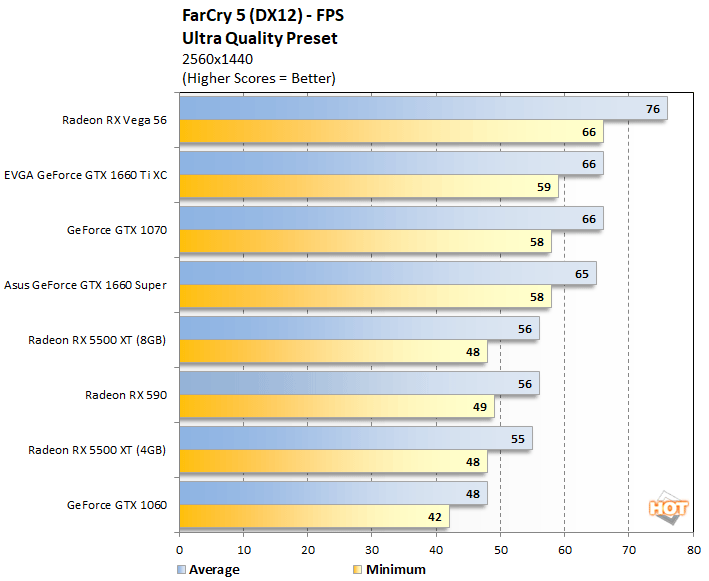 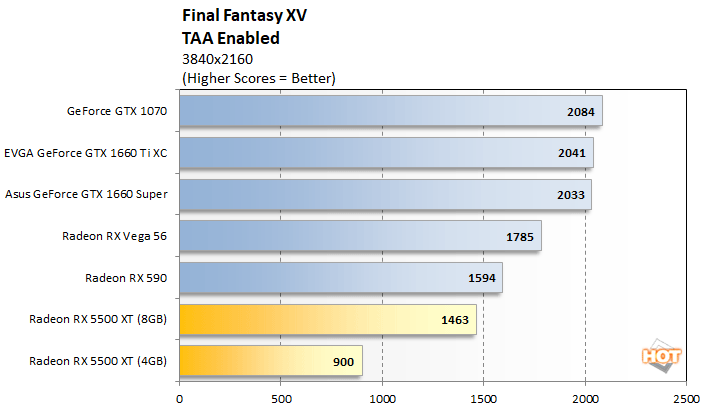 We are presenting these FF XV benchmark scores to clearly illustrate the potential pitfalls of having only 4GB of memory on a graphics card as we head into 2020. This game clearly favor's NVIDIA's architecture, and we're running at a very high resolution. Even still, this is what could happen more often as games get more graphically complex and consume more than 4GB of video memory moving forward. As you can see, the 4GB Radeon RX 5500 XT trails its 8GB counterpart by about 40%.

Like previous-gen Radeons, when the Navi-based GPU at the heart of this card is boosting, frequencies and voltages scale upwards (power and temperature permitting) based on the GPU's workload at the time. With the tuning options built into AMD's driver suite though, users have the ability to manually alter frequencies, voltages, fan speeds and the power target, to fine tune performance, power, and acoustics. 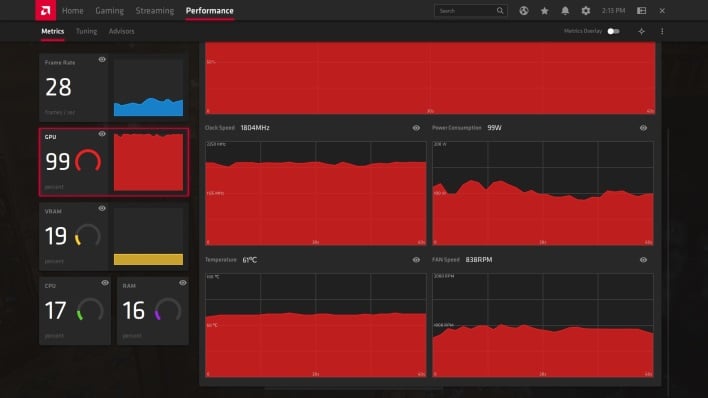 
In previous-generation Radeons, though the GPUs had multiple sensors built-in, a single sensor had been used to determine the GPU temperature and data from that lone sensor was used to control the card's thermal profile. With newer GPUs, AMD has incorporated a network of multiple thermal sensors at strategic locations across the die. Data gathered from this array of sensors is used to determine what AMD is calling the "Junction Temperature", and it's the Junction Temperature data that is used to tune the cards' power and thermal profiles (the Junction Temperature is effectively the hottest part of the GPU die at any given time). AMD claims the increased resolution and accuracy from the additional thermal sensors allows it to increase overall sustained performance, because thermal throttling based on the Junction Temperature is more reliable and effective.

The tuning options built into AMD's Radeon Software suite offer manual tuning, along with automatic under-volting and automatic GPU and Memory overclocking. Due to time constraints, we took the path of least resistance with the Radeon RX 5500 XT, and used AMD's Auto Overclocking tool too see how much additional performance was offered by the card. 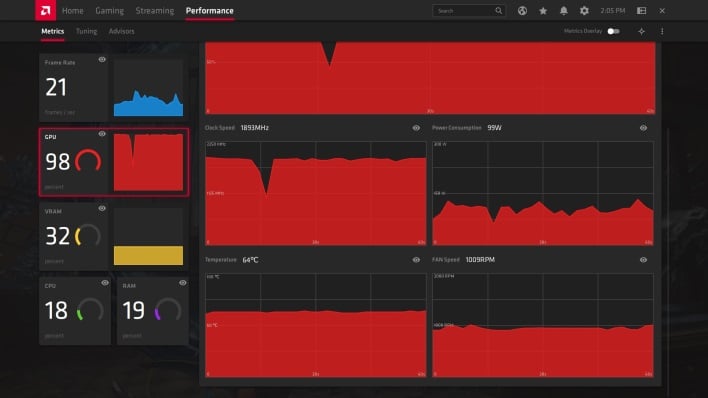 
At its stock settings, we saw the GPU clock typically hovering around the 1,800MHz mark with the Sapphire Pulse Radeon RX 5500 XT we used for testing. With Auto Overclocking enabled, however, AMD's software recommended a GPU clock of 1980MHz, but while gaming the GPU frequency stayed closer to the 1900MHz mark, and mostly fluctuated between 1880MHz - 1890MHz. 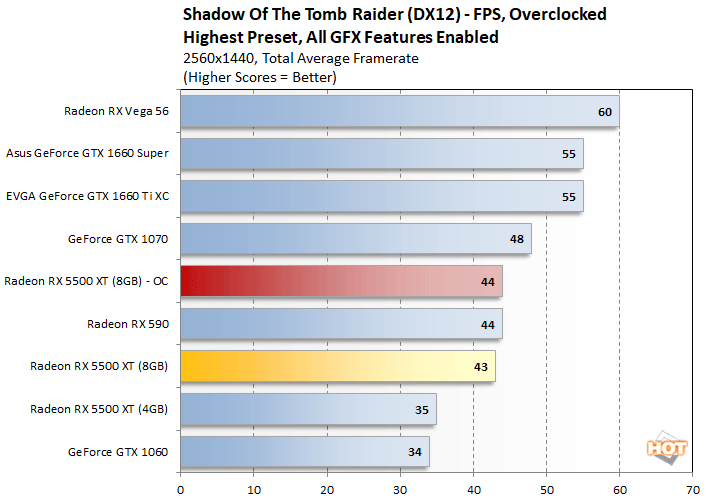 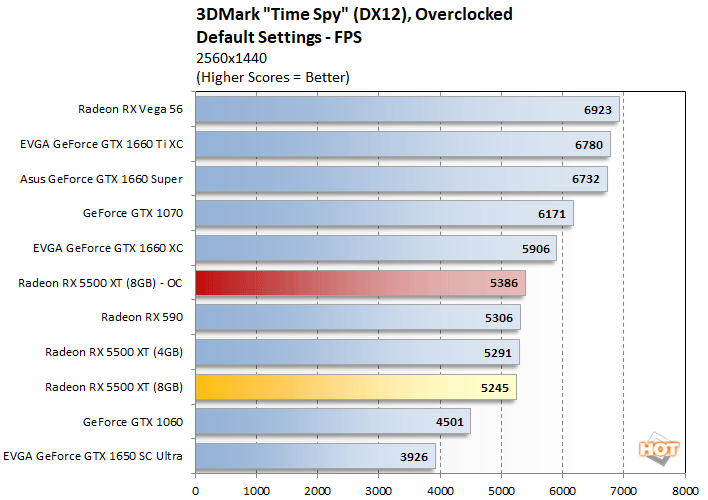 When all was said and done, the Radeon RX 5500 XT 8GB ended up catching the Radeon RX 590 in the Tomb Raider benchmark and overtaking it by 80 points in 3D Mark Time Spy. With some additional time and manual tuning, however, we're sure there's some more performance to be gained, but not enough to push it into the same territory as the upper echelon of more expensive GPUs.

As we're writing this, we are experimenting with some manual settings (tweaked frequency / voltage curve, +20% power limit, and higher memory clock and fan speeds) and the GPU clock is still hovering in the high 1800MHz range. The 3DMark Time Spy score has only increased to 5458... 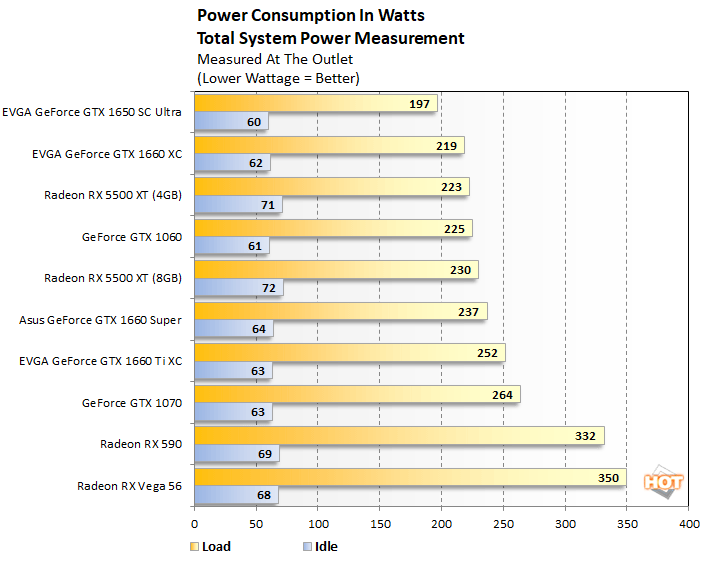 Noise output wasn't an issue with the Sapphire Pulse Radeon RX 5500 XT either. The card was quiet throughout our testing, regardless of the workload. The fans on the card do spin up to barely audible levels when the GPU is warmed-up and under sustained load for a while, but they are very quiet overall and while the card is idling, the fans stop spinning altogether.