How We Configured Our Test Systems: We tested the professional graphics cards represented in this article on a MSI X570 Godlike motherboard, equipped with a Ryzen 9 5950X and 16GB of G.SKILL DDR4 RAM clocked at 3,200MHz. The first thing we did when configuring the test system was enter the UEFI and set all values to their "high performance" defaults, then we disabled any integrated peripherals that wouldn't be put to use, and enabled Resizable BAR support. The memory's clock was dialed in to its optimal performance settings using its XMP profile and the solid state drive was then formatted and Windows 10 Professional x64 was installed and fully updated. When the Windows installation was complete, we installed all of the drivers, applications and benchmark tools necessary to complete our tests.

ANDRA's GPGPU Image Processing benchmark runs through an array of filters on its reference data and offers up an aggregate score, derived from a multitude of individual results. Its GPGPU Cryptography benchmark churns through an assortment of workloads, and presents individual results for overall bandwidth, AES256 encryption and decryption, and SHA2-256 hashing bandwidth. CUDA and OpenCL code paths are available in these tests, but we used OpenCL on all cards. Previously, using the CUDA path with NVIDIA GPUs resulted in better performance, but OpenCL actually outperforms CUDA in the latest versions of this test.

The new Radeon Pro W6600 put up relatively strong numbers in SANDRA's Image Processing benchmark, outrunning all of the previous-gen cards we had on-hand and available for testing. It nearly doubled the performance of the Quadro RTX 4000, but fell way short of the more powerful Radeon Pro W6800.

SANDRA's various Cryptography-related benchmarks had the Radeon Pro W6600 landing about in the middle of the pack, typically a few percentage points ahead of the previous-gen Radeon Pro W5700 and falling behind the Quadro RTX 4000 only in terms of hashing bandwidth. 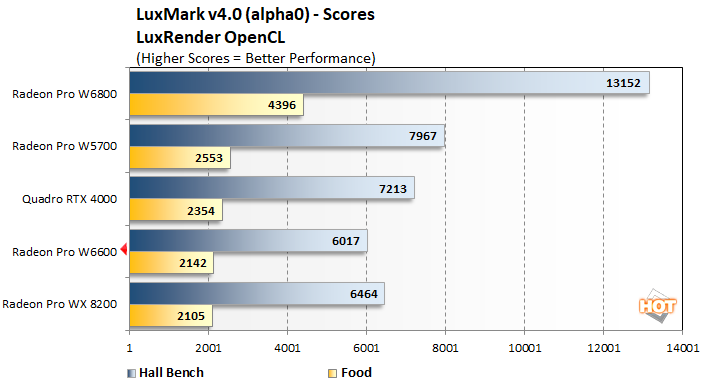 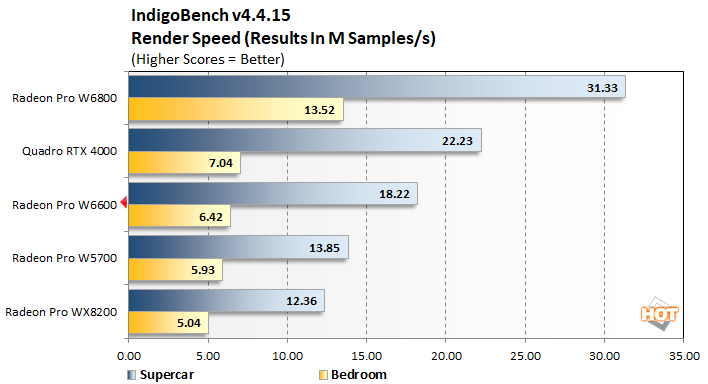 The Radeon Pro W6600 finishes just behind the Quadro RTX 4000 in IndigoBench, but well ahead of the previous-gen Radeon Pro cards. Once again though, the high-end Radeon Pro W6800 holds onto a commanding lead.

lender is a free and open source 3D creation suite that can handle everything from modeling, rigging, animation, simulation, rendering, compositing and motion tracking, even video editing and game creation. It has a built-in benchmarking tool that will track the time it takes to complete rendering a particular model. We used a GPU-focused BMW model for these tests here... 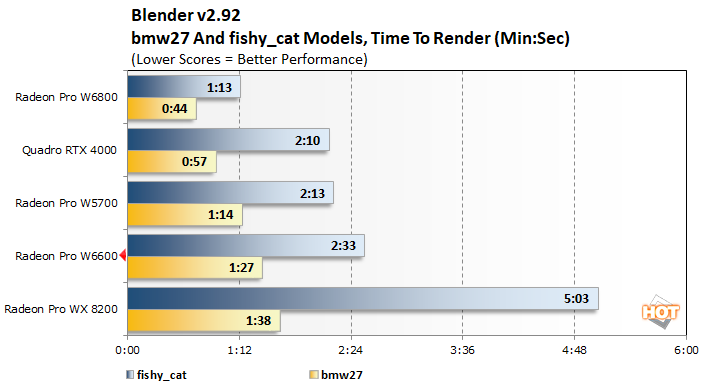