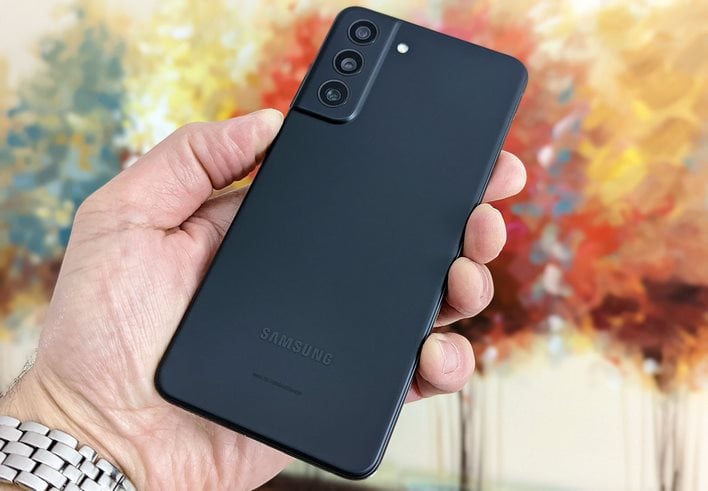 Samsung's previous generation Galaxy S20 Fan Edition was met with high praise for its value proposition when it launched last November. The goal of Samsung's Galaxy FE products is to deliver key features most mainstream and enthusiast users want at a price point that's more approachable for the masses. This class of smartphones has been wildly popular with tech-savvy enthusiast consumers, so it's no surprise Samsung is bringing the Galaxy S21 FE 5G out as an extension of its successful Galaxy S21 family, just ahead of its next generation product launch that we should be hearing about in short order. As some have already noted, the Galaxy S21 FE's timing might be a little behind schedule, but that doesn't mean its $699 price tag, combined with top-shelf features and what should be solid Snapdragon 888-powered performance, are any less compelling.

Samsung's Galaxy S21 FE arrives against the backdrop of Google's troubled Pixel 6/6 Pro launch, at a $100 premium over the Pixel 6 but a $200 discount under the Pixel 6 Pro, and it checks a lot of boxes in terms of both hardware and software features. However, there's nuance here that you'll want to sift through a bit, so let's dive in deeper with Samsung's latest value-mind Galaxy phone. 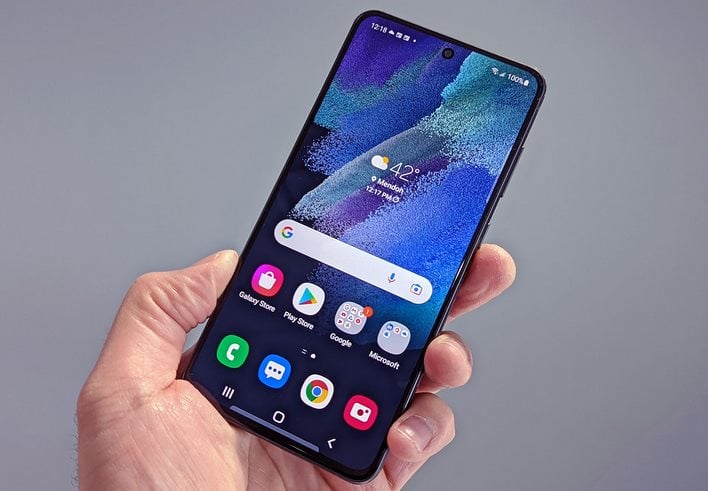 As we alluded to early, the Galaxy S21 FE's spec list is a solid offering of the latest in mobile platform technologies. On board is one of the fastest Android mobile platform processors on the market right now in the Snapdragon 888, though admittedly next generation Snapdragon 8 Gen 1 devices are right around the corner, arriving this quarter. Supporting that Snapdragon is up to 8GB of LPDDR4 RAM (we have the 6GB base model here), up to 256GB of storage (128GB base) and a fairly stout 4500 mAh battery.

The Galaxy S21 FE also supports both Sub-6 and mmWave 5G connectivity as well as Wi-Fi 6, Ultra-Wide Band and Bluetooth 5.2. You also get both wired and wireless charging, though only at 25 and 15 Watts respectively, which is far behind the ultra-fast charging capabilities of some competitive offerings from OnePlus and others (though admittedly much easier on battery endurance). Cap these top line features off with full IP68 water and dust resistance, and before you get to design choices for its camera and display, the Galaxy S21 FE definitely stands-up to competitively in terms of flagship specs. 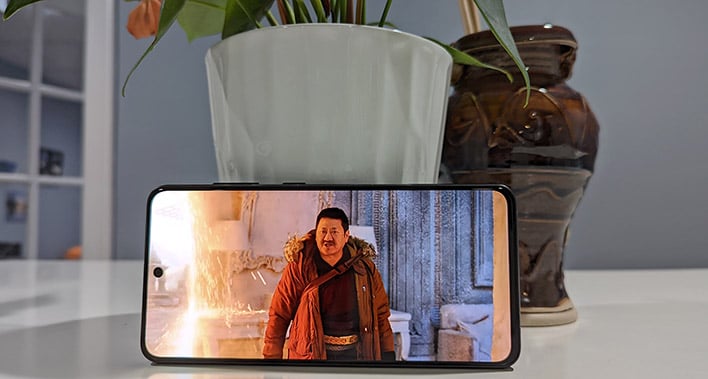 Speaking of the Galaxy S21 FE's display, it's definitely a top selling point for this device. It's a typical AMOLED beauty from Samsung with great saturation, contrast, brightness and pop that also has 120Hz and 60Hz refresh rate modes for either silky smooth animations or better battery life in the latter setting. The other nice thing about this display is that it measures in at what we would call a sweet spot size of 6.4-inches. The Galaxy S21 FE is probably one of the most efficient phones real estate-wise on the market right now, and is sure to be a crowd-pleaser, as it's not too big for those that like a more compact handset and not too small for those that want more of a full featured experience.

From a overall design standpoint, the GS 21 FE sports a metal frame with plastic backing. The Graphite color you see here in our review sample tends to show fingerprint smudges a bit more than if it was a glass backing. However, it's plastic composite shell is also likely more resistant to cracks and scratches than even a Gorilla Glass-strapped backside would be. All told, the phone feels solid in the hand, though maybe not quite as premium as other all-glass competitive offerings like the Pixel 6 series but, depending on your perspective and use case, that might not much of a concern.

Samsung's One UI 4.0 offers smaller refinements over previous versions of the company's user interface skin that now ships with Android 12 under its hood. Things are a little tighter here, with a couple of thoughtful feature adds like more customizable widgets that allow for tweaking opacity and adjustments for Dark Mode, to a renewed focus on privacy. There's now a Privacy dashboard that lets you quickly control app-level access to your microphone, camera, device location and even whatever might still be in your clipboard at the time. It also allows you to enabled/disable alerts for each of these areas.

What is not new, however, is Samsung's persistence with respect to reinventing its own versions of the Android interface, including the keyboard and Samsung voice input. I honestly prefer Google keyboard (Gboard) and voice input over Samsung's alternatives. And though these can be swapped out, for many mainstream users that's probably not going to be something they'd dig into. There are a few other more obvious reinventions of the wheel like the text Messages app itself, and of course Bixby is still here. However, for the savvy Fan Edition user, you can still tweak whatever you want to replace with stock Google apps, if that's the way you prefer to roll. 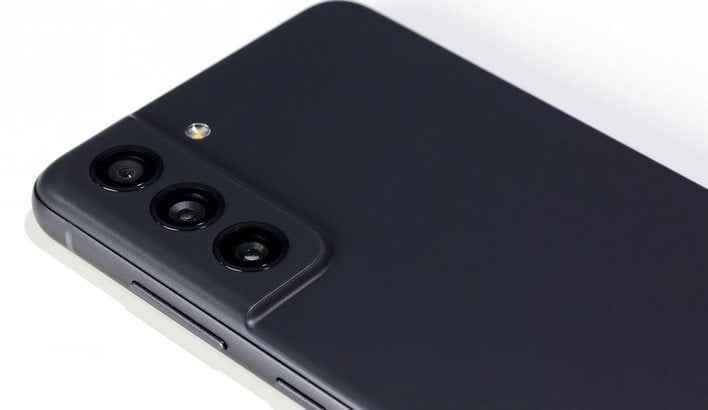 Beyond the hardware, however, again software and shot mode features remain the same as the Galaxy S21 series, including unique Samsung modes like Single Take and Super Slow Mo, as well as more standard modes like Night, Portrait and Panorama. And so, in short, you can expect very much the same experience and performance here with the Galaxy S21 FE 5G as we found in Samsung's Galaxy S21 5G back in February of last year. So let's dig in for some sample shots...

Though it's a little hard to line up identical for comparisons, due to Samsung's slightly closer crops, even in full sensor 4:3 mode, here you can see how the new Galaxy S21 FE holds up with intricate details in a challenging mixed lighting environment versus what the Pixel 6 Pro's excellent main camera can capture. As usual, we see slightly muted colors from the Pixel device, though with a little less noise in the background of the image than what we see from the GS21 FE. I personally prefer the light capture and color rendering of the Galaxy S21 FE though a case can be made for either, depending on your taste. Another thing we appreciate about the Galaxy S21 FE is how it maintains the same exposure and color balance between shot modes, which the Pixel 6 also does well, but that's not something that can always be said for other phones.


Portrait mode shooting is also handled well in good lighting conditions but can occasionally be challenged in less than ideal settings. In the shot with Yogi the Jack Russell terrorist above, we were actually able to capture a really nice solar flare effect and some nice shadows and lighting in the snow with a pleasing bokeh blur in the background, while keeping our furry (and chilly) shot subject crispy and detailed. The flower shot indoors proved slightly more challenging, however, with some of the shot subject blurred in the with the background in spots. Especially when it comes to people and animals though, the Galaxy S21 FE's shot composition algorithms do get the job done nicely.

As we found on the Galaxy S21 series as well, the GS21 FE's Ultra-Wide camera is a great way to get more of that panoramic vista you're looking to capture into the shot. Again color reproduction here is vibrant with very little noise, which is also something we were impressed was also not an issue with the 3X telephoto zoom shot of the woodpecker here.

Overall we're impressed with Samsung's camera chops yet again, and the Galaxy S21 FE delivers impressive results in all the most popular and commonly used shot modes. Color saturation might be a touch too amplified for some tastes, but if we're looking at the shot of Yogi on the stairs, for example, what's been captured and rendered is pretty darn close to accurate overall.

Let's fire up some benchmarks for a look at performance and battery life, next...
NEXT PAGE