Before running our selection of benchmarks, we apply the latest Windows and driver updates to the system we are testing (in this case, the Alienware m17 R4). Other than that, we run all our tests with out-of-the-box settings. Our goal is to test the system as it ships, but after auto-updating, to accurately reflect what buyers can expect from a retail experience. 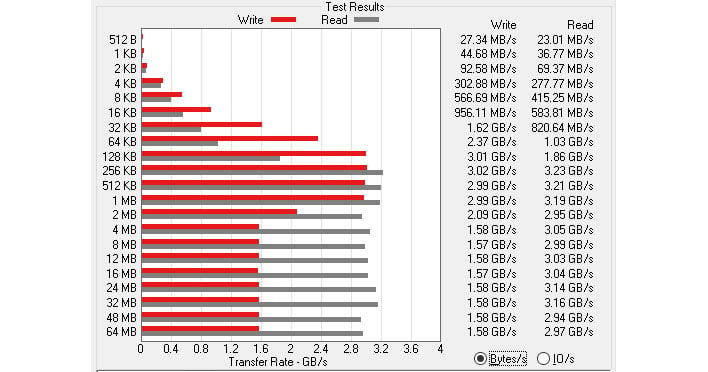 What kind of performance can you get from a pair of PCIe 3.0 SSDs in RAID 0? Well in this case, we're looking at sequential read and write speeds of just north of 3GB/s. Not too shabby, but we'll double down on saying we don't see the point in going with a RAID 0 array versus just installing a single, high-speed SSD, to reduce the risk of data loss (if one of the drives goes bad in a RAID 0 array, you lose your data on both). There are plenty of single drive solutions that offer this kind of performance.
Our quibble aside, the storage subsystem is very fast overall. Not on the level of a PCIe 4.0 SSD (speeds of which typically range from 5GB/s to over 7GB/s), but still leaps and bounds ahead anything of SATA-based (SSD or HDD).


We recently moved on to BrowserBench.org's Speedometer test, which takes a holistic look at web application performance. This test automatically loads and runs several sample web apps from ToDoMVC.com using the most popular web development frameworks around, including React, Angular, Ember.js, and even vanilla JavaScript. This test is a better example of how systems cope with real web applications, as opposed to a pure JavaScript compute test like JetStream. All tests were performed using the latest version of Chrome. 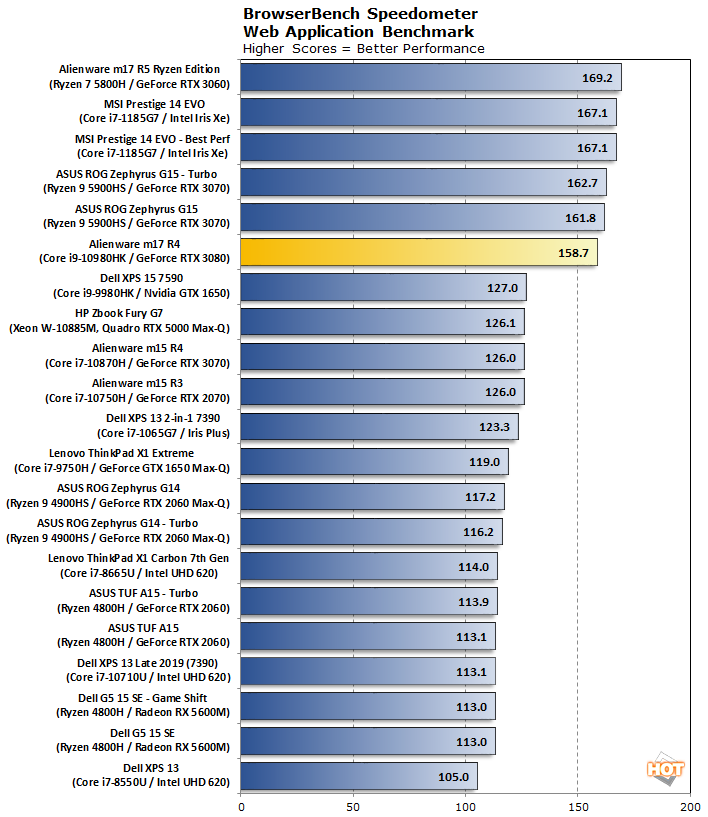 The Core i9-10980HK stretched its legs in Speedometer where it helped position the Alienware m17 R4 towards the front of the back. There is a clear separation between the five fastest laptops in our collection of scores, and all the rest, though keep in mind the performance increases seem by some of the faster machines are likely software related. Good stuff so far, though. 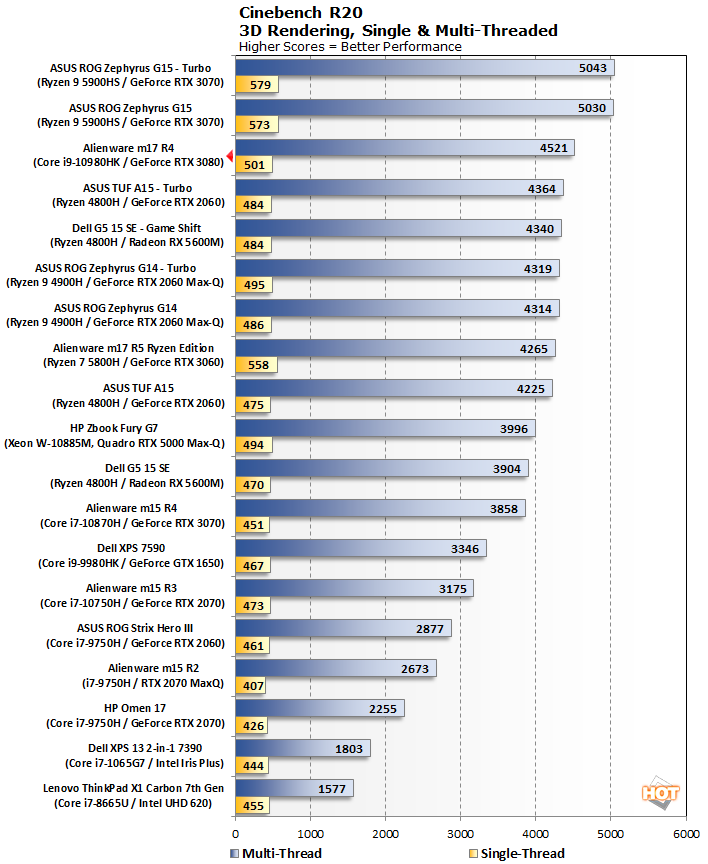 Comet Lake may not be the newest architecture on the block, but it is still capable of delivering big performance, as we see in Cinebench R20. Both the single-threaded and multi-threaded scores are second only to AMD's Zen 3 architecture, as represented by the ASUS ROG Zephyrus G15. We ran that laptop in two different modes, so really the Alienware m17 R4 takes second place here, since the two top scores come from the same system. 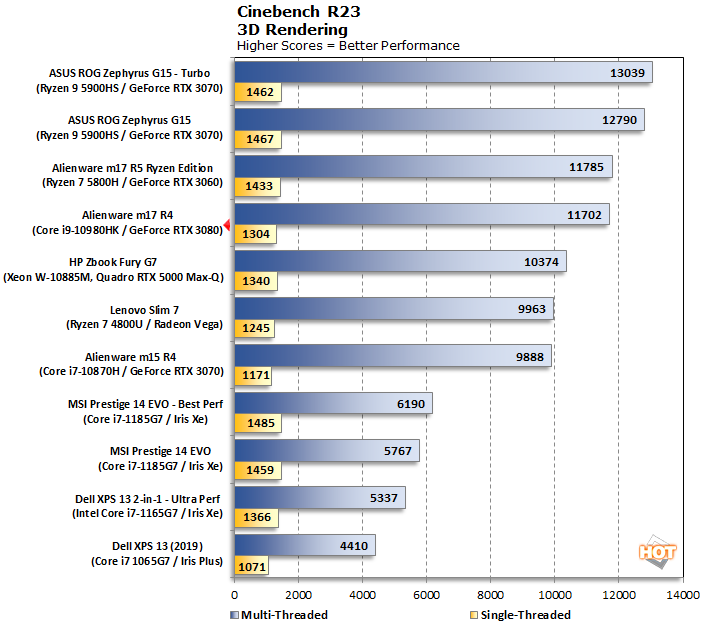 Our collection of Cinebench R23 scores is not as robust, but we do have a handful of data points. Here we see the Alienware m17 R4 place third in the single-threaded test, among the eight laptops we've run this benchmark on. And in the multi-threaded test, it is behind only two laptops. 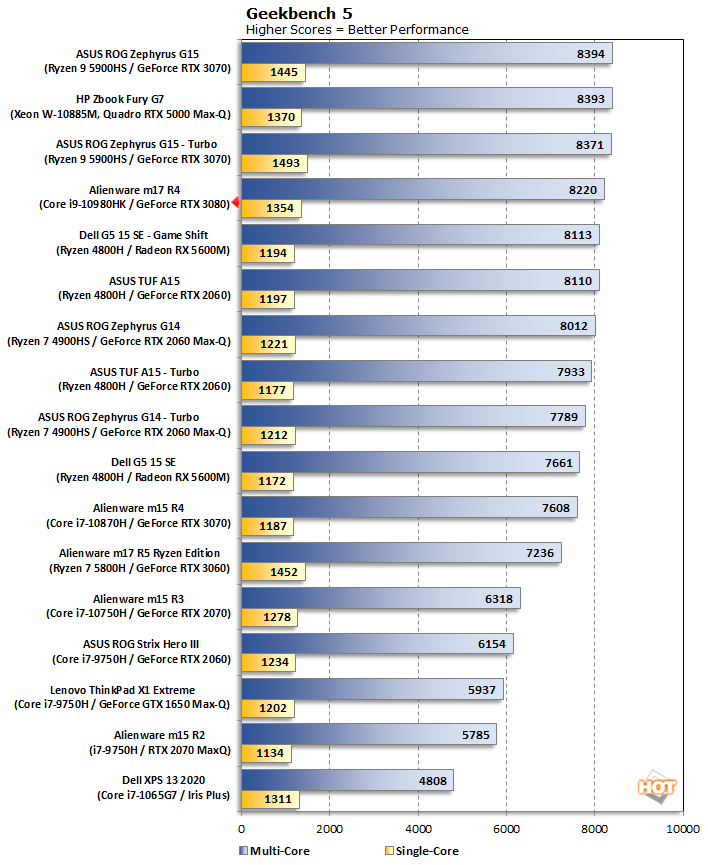 Geekbench seems to favor AMD ever-so-slightly, but even so, the Alienware m17 R4 claws its way towards the top, trailing just two other laptops in single-threaded and multi-threaded testing. This is another strong showing from Intel's previous generation flagship mobile gaming processor. 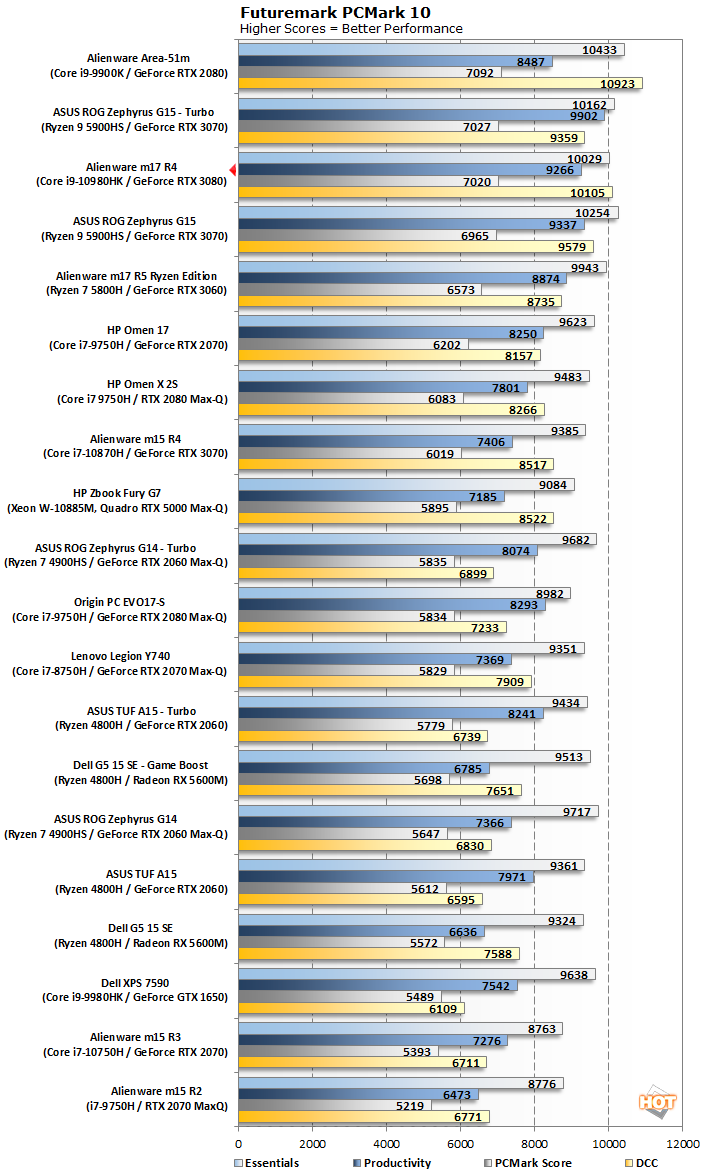 Here we see a third place finish for the Alienware m17 R4. Its overall score of 7020 is slightly ahead of the ROG Zephyrus G15 when not in Turbo mode, and we see good scores across the board. The combination of a fast 8-core/16-thread CPU, 32GB of RAM, SSD storage, and NVIDIA's best mobile GPU is not surprisingly adept at productivity and content creation chores. 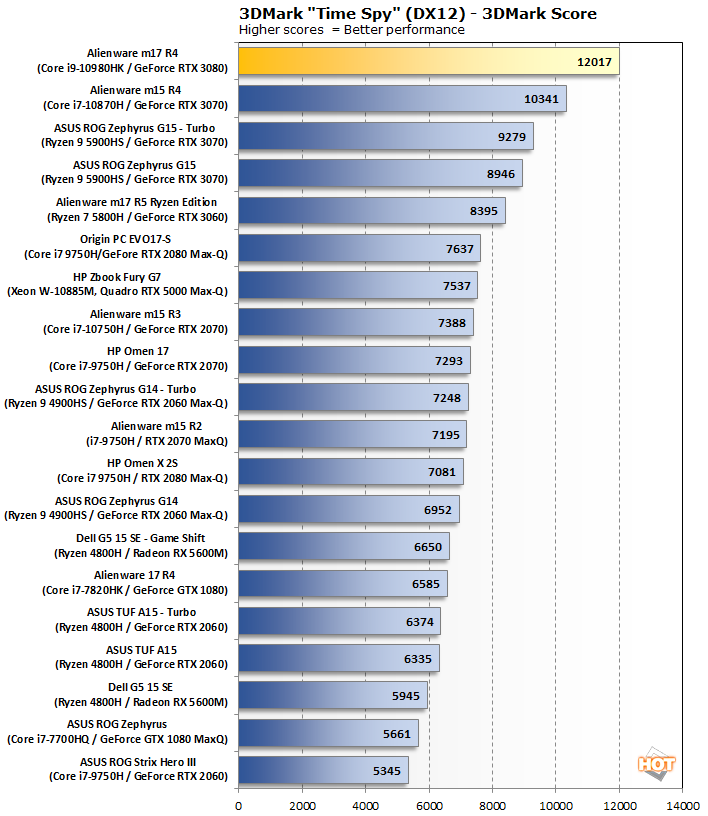 PCMark 10 is one thing, but what happens when we zero in on 3D performance? The GeForce RTX 3080 asserts its dominance and propels the Alienware m17 R4 to the top of the pack. It scored 12,017 in the Time Spy test, which is more than 16 percent higher than the next closest score, which we obtained from the smaller Alienware m15 R4. 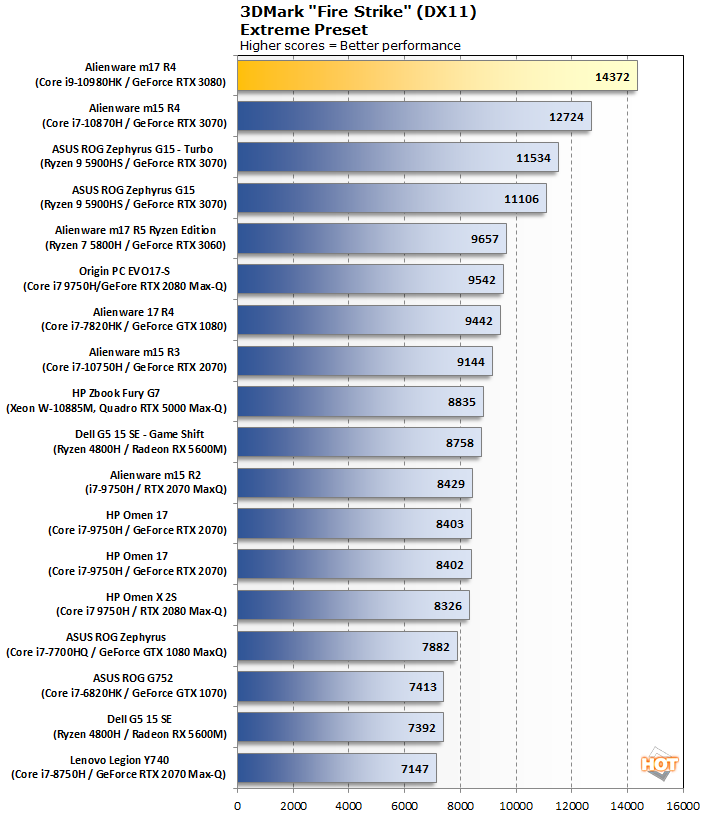 We saw the same thing in the Fire Strike Extreme test, with the Alienware m17 R4 leading the way. The gap was not quite as big this time around, but still around 13 percent compared to the next fastest laptop in this test. 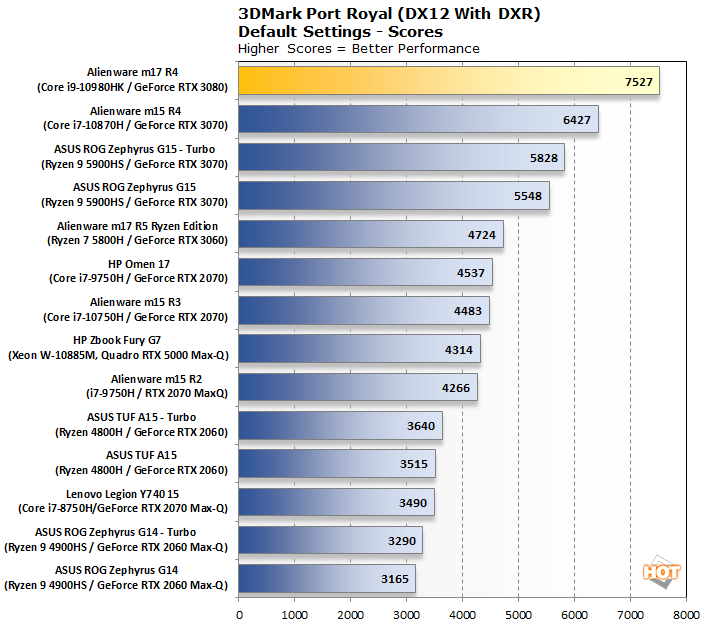 The Alienware m17 R4 completed its clean sweep of our 3DMark benchmark runs by notching another high score in Port Royal, which bumped the gap up to over 16 percent from its little sibling. Clearly the GeForce RTX 3080 is in a league of its own, especially in this case, in which Dell configured it to run full bore. 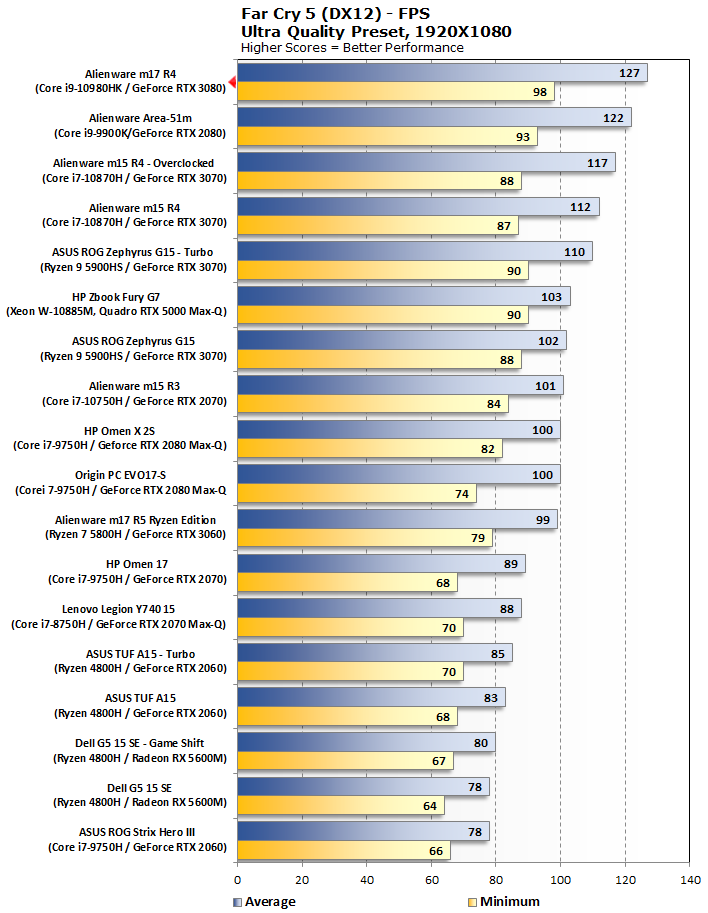 Moving away from synthetic 3D testing into actual games did not change the narrative. Kicking things off with Far Cry 5, the Alienware m17 R4 again led the pack, averaging 127 frames per second. This is where having a high refresh rate display can pay dividends.

Gears 5 was one of the fall blockbusters we had a chance to dig deeply into, and on top of looking great, it's a blast to play. Due to the relative newness of the game, we don't have a ton of notebooks represented, so we intermingled some desktop GPU results for reference. We used the High preset at 1920x1080, same as before, to test this game. 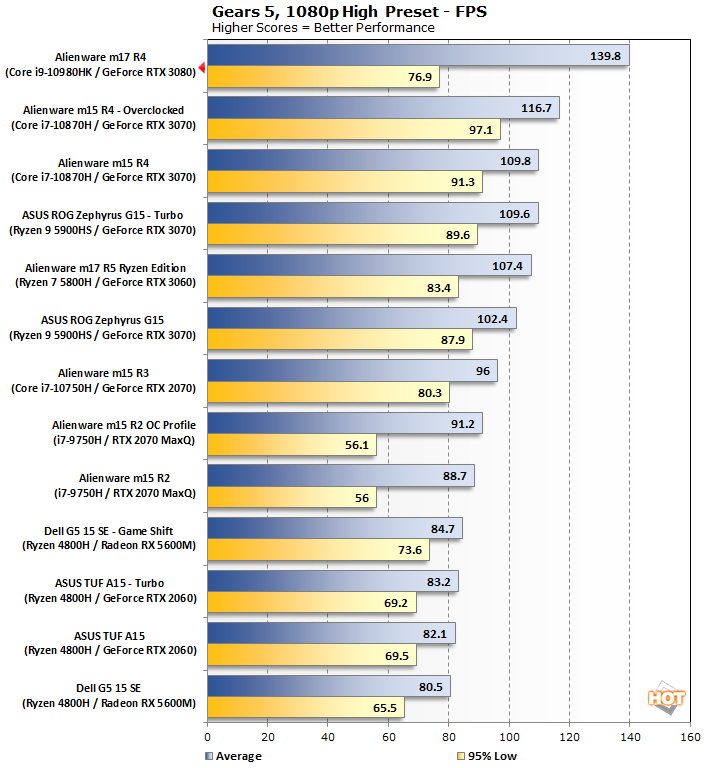 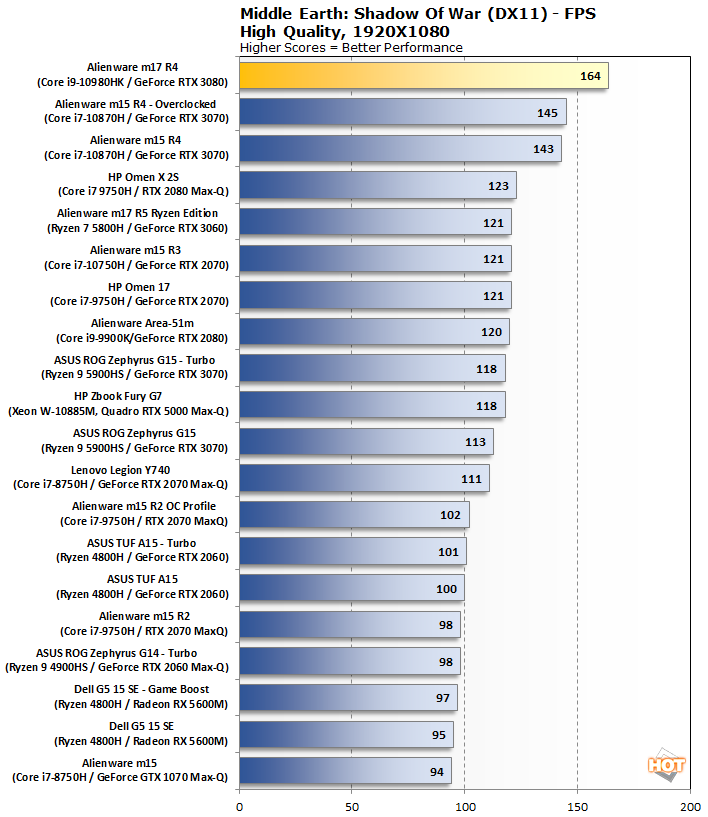 Shadow of War is yet another benchmark that is dominated by the Alienware m17 R4. At 164 frames per second, it is more than 13 percent faster than the next best performing laptop we've tested. 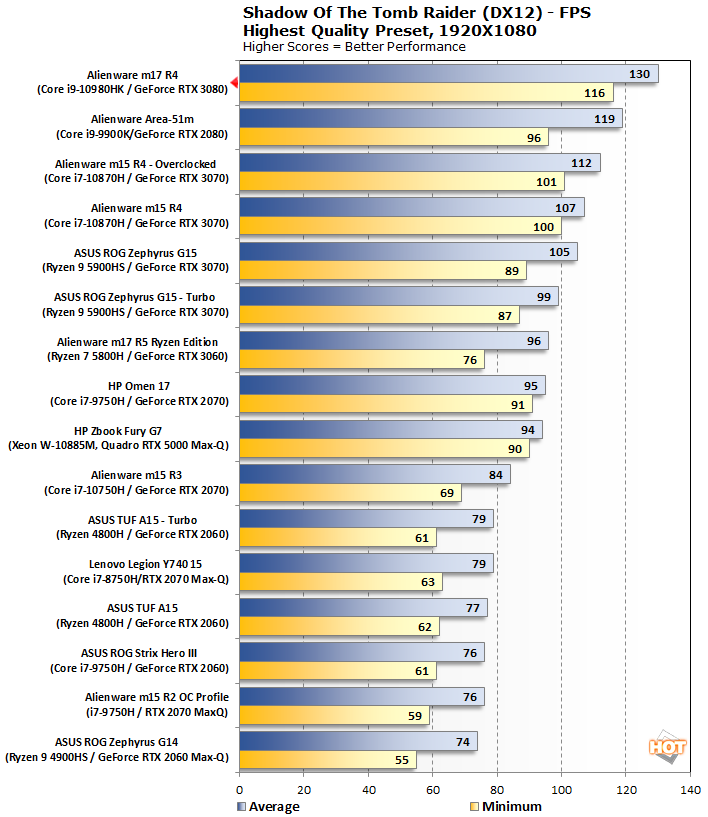 Another game, another first place finish. This is now a trend, with the Alienware m17 R4 averaging 164 frames per second in Shadow Of The Tomb Raider. This is exactly the kind of gaming dominance you want to see if splurging on a top-end configuration.

We run a custom 1080p HD video loop test developed in-house, to prove out battery life with our test group of machines. In all tests, Windows 10 Quiet Hours has been enabled and the displays are calibrated with lux meters on pure white screens to as close to 115 lux as possible. For the average laptop this is somewhere between a 40-60 percent brightness setting. In the case of the Alienware m17 R4, this required lowering the brightness to 33 percent on the slider in the Windows 10 sidebar. 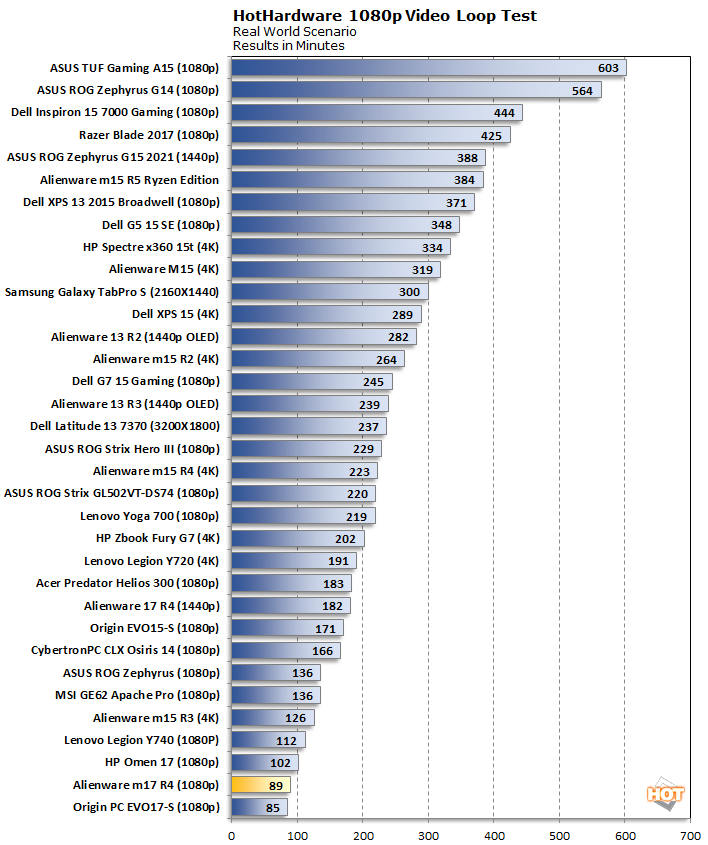 Battery life here is, shall we say, not great. The laptop only lasted about an hour and a half in our video loop test, and if you crank up the brightness, you can expect an even shorter run. The saving grace is that this is an ultra-high performance gaming laptop, and as such, battery life expectations go right out the window. Assuming this will mostly be used for gaming, you'll be keeping this plugged into the wall anyway, just as you would with any gaming laptop. Still, it's something to keep in mind if you intend to work on this machine as well, away from an outlet. You can have your cake, but can only eat it in small bites.