EVGA XR1: This Could Be The Best USB Capture Device Yet 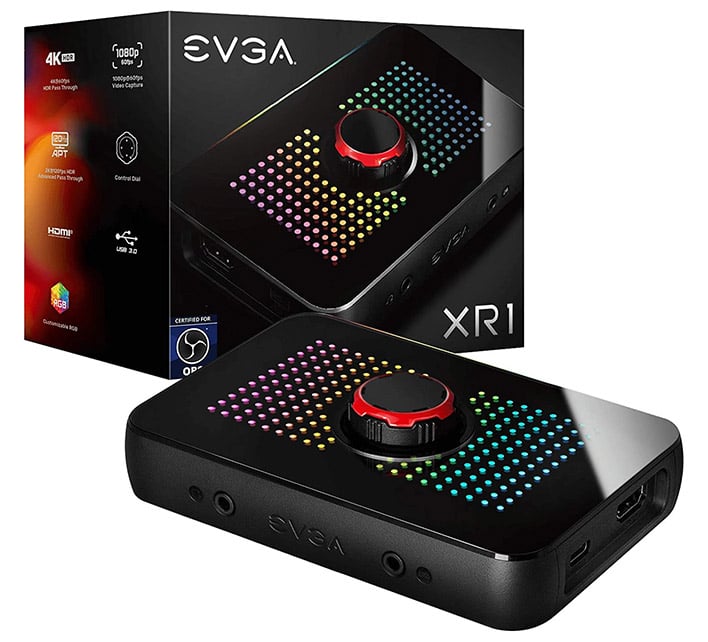 HDMI capture cards, or HDMI capture devices, are extremely valuable tools with a wide variety of uses. As the description implies, these devices allow virtually any HDMI feed to be routed through them to be captured by a computer. The HDMI inputs on capture devices can be used with game consoles, video cameras, or even another computer -- just about any HDMI video source. This signal can then be encoded on the fly for a livestream, recorded for preservation, or both simultaneously. Most capture cards also allow for an HDMI output which passes a signal through the device, directly to a display with minimal latency. The market is fairly saturated with models capable of taking in 1080p60 footage and spitting 1080p60 footage out, but some devices are able to cater to more specific needs and offer higher quality output options. The EVGA XR1 Capture Device is one such solution which may appeal to gamers with 4K or otherwise high refresh rate or high resolution displays, who also wish to stream or record at 1080p.

The EVGA XR1 is able to receive a 4K60 input signal and pass it through to a display while capturing scaled down 1080p60 footage. Alternatively, it features an “Advanced Pass-Through” (APT) mode, which allows users to switch between 1080p60 capture and the APT mode with up to 1440p120 pass-through without capture, at the press of a button. This APT mode is for users who want to switch between 60fps capture for streaming and higher refresh rates for normal gaming without having to swap around cables.


Setting Up The EVGA XR1: A Few Wrinkles

The EVGA XR1 has a few physical inputs and outputs to get acquainted with. At a bare minimum, users will link a source device to the HDMI Input and connect the USB-C Output back to a PC. Typically, this setup would be used with a camera as the source device where monitor pass-through is not necessary.

The included USB cable has Type-C at one end which plugs into the XR1 and a dual USB-A 3.0 + USB-A 2.0 connector at the other. We found substituting this with a USB-C to USB-C cable worked perfectly fine as well. If desired, a 4-pin TRRS style headset can be connected to the XR1, though we found a USB microphone connected directly to the PC works just as well without losing sync in this configuration. 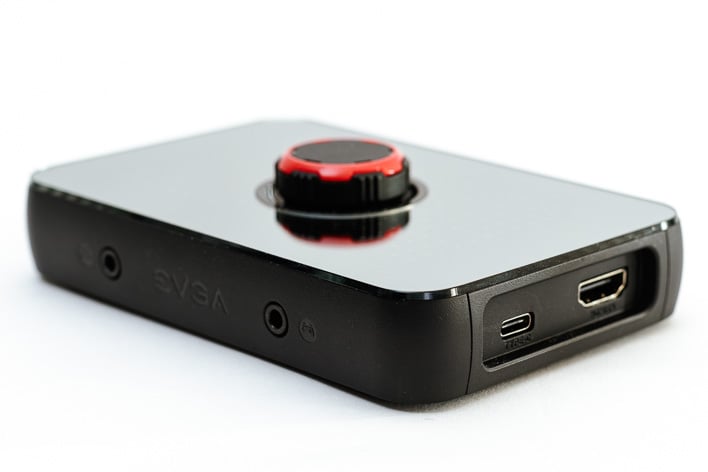 Those using the XR1 for game capture will also want to connect the XR1’s HDMI Output up to their monitor. While the captured feed via USB has minimal latency, it is still noticeable. However, the HDMI pass-through has no tangible latency that we could detect. Furthermore, the XR1 needs to be set as your gaming system’s audio output to get sound captured correctly. This means you will need to use the XR1’s headset jack as described above to hear the game and add commentary or else you’ll need to monitor your feed from the capture computer, which may result in desynchronization.

On consoles, the Console Party Link jack can be used to hook in the controller as well to pipe in your party’s voice comms.


At 4K and 1080p resolutions, the EVGA XR1 performs on a truly “plug-and-play” basis. With Windows 10, the capture card can be used without ever installing the accompanying software package. The software can be used to customize the RGB settings or toggle HDCP compatibility, but is not necessary for basic capture. All a user really needs is a program to capture the HDMI feed, which can include Open Broadcaster Software (OBS), Skype, Zoom, vMix, and practically any other application that can receive a video input.

EVGA touts the XR1 as the first "OBS Certified" capture device on the market for extra compatibility peace of mind, though we have not personally experienced any issues with other cards in OBS.

The setup becomes more complicated to use with 1440p or other “odd” resolutions. We conducted the bulk of our testing using an LG 27GN850 1440p 144Hz G-Sync Compatible monitor. By default, Windows will not allow users to set the desktop resolution to 2560x1440 when capturing via the XR1. 1440p can only be set when APT mode is enabled which turns capture off. 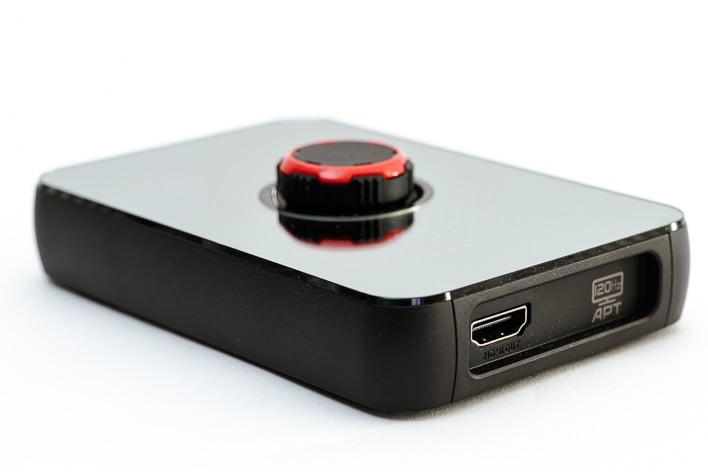 Instead, Windows forces the resolution to 4K. While this is usable on a 1440p monitor, it is far from ideal. The only other resolutions offered in Settings are 1920x1080 and lower. Fortunately, there is a workaround. We were able to use the NVIDIA Control Panel to create a custom 2560x1440 60Hz resolution, apply it, and retained the ability to capture footage at 1080p60. This still uses a 3840x2160 signal though so the image sharpness is ever so slightly soft.

Remember how we said 1440p can be set with APT enabled? Well, there is a catch here too. By default, the refresh rate tops out at 100Hz. In order to achieve the advertised 1440p 120Hz Advanced Pass-Through, we returned to the NVIDIA Control Panel and set another custom resolution for 2560x1440 with the refresh rate configured to 120Hz. With that applied, we found we were successfully able to toggle between 1440p60 with 1080p60 capture and 1440p120 sans capture on the XR1.

Still, not all is perfect. No matter the set resolution, the NVIDIA Control Panel no longer lists G-Sync as an available option when the XR1 is in play. One unavoidable consequence of using a capture card is that we lose access to adaptive sync. Whether the convenience of not having to fiddle with cables is worth losing this feature is a decision that needs to be made by individual users. We will note that with an AMD GPU, such as the Radeon RX 5700 XT and RX 6800 XT we tested with, FreeSync compatibility is preserved, but we did need to disable HDCP support in the XR1's software and Radeon Adrenalin in order to get a usable signal.

The XR1’s controls are very straightforward. As mentioned, users can switch between capture and APT modes by pressing and holding the control dial in for about 3 seconds, until the lighting changes. The lighting effect mode can also be changed by rocking the control dial up or down to cycle presets. When the control dial is rocked to the left and right, it allows the volume of your microphone and Console Party Link to be adjusted respectively with a subsequent twist of the dial.

The XR1’s APT mode toggle brings its own quirks. While the XR1 is in capture mode, users need to configure the Source system’s audio output to the EVGA XR1 over HDMI. This necessitates plugging a 4-pin TRRS headset into the XR1 in order to hear the gameplay. However, there is no way to route the microphone as an input back to the Source computer; it instead is sent over USB to the Encoding computer and mixed together with the Source computer’s output. Each of these levels can be controlled independently using the control dial as described above. 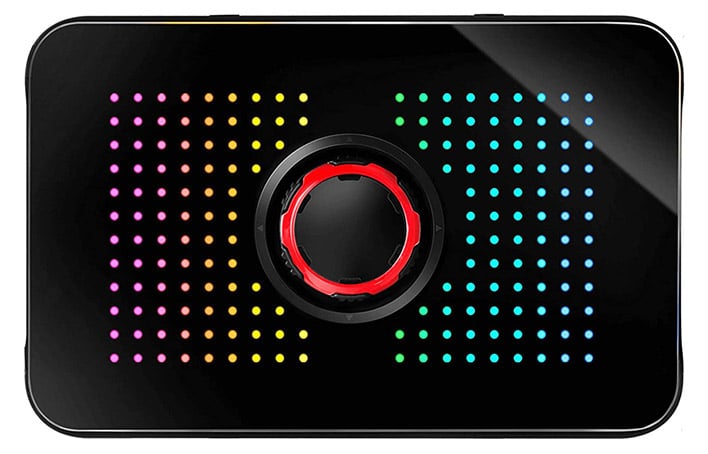 For conventional solo streaming, this makes it easy to control volume mixing. However, it breaks down in two areas: streaming with a party call (e.g. Discord) going on and also when switching to APT. In the first case, because you can only hear the output from the Source system using the headset, the call needs to be joined from that computer. However, because the headset microphone does not route back into the Source system, a second microphone needs to be connected into the source system for your party to hear you. Your party’s voices are mixed in as part of the Source system’s audio output which means they need to be mixed manually in software relative to the game volume.

In the second case, the headset jack no longer passes audio through from the Source system. This necessitates disconnecting the headset from the XR1 and moving it to directly connect to the Source system. Granted, this is easier to accomplish than re-routing all the display cables each time you need to swap, but it makes the transition between modes take more than a press of a button. Many of these issues can be worked around with third party software, but each of these solutions adds complexity and potentially latency.


Transform Your DSLR or Mirrorless Camera Into A Webcam

The goal of using any capture card is to get the highest quality feed possible. We tested the XR1 for two purposes. The first is capturing a video feed from our DSLR camera for use on our Two and a Half Geeks podcast and other video calls. The second is capturing gameplay footage for a livestream or recording.

We tested the XR1 using a Canon EOS 80D, Rebel SL2, and EOS R6 as well as an Olympus EM1X and EM1 Mark III. Each of the Canon camera models worked perfectly while set to 1080p60 capture. In addition, the EOS R6 supports 4K capture which works equally well, although the XR1 still only outputs a 1080p60 feed. Either way, the captured video appears as flawlessly as an 8-bit feed can. Latency is minimal, only a couple frames, and it is not enough to throw audio out of sync for video calls. The quality of the feed users on the other end of the call receive will only be limited by the video call platform itself. 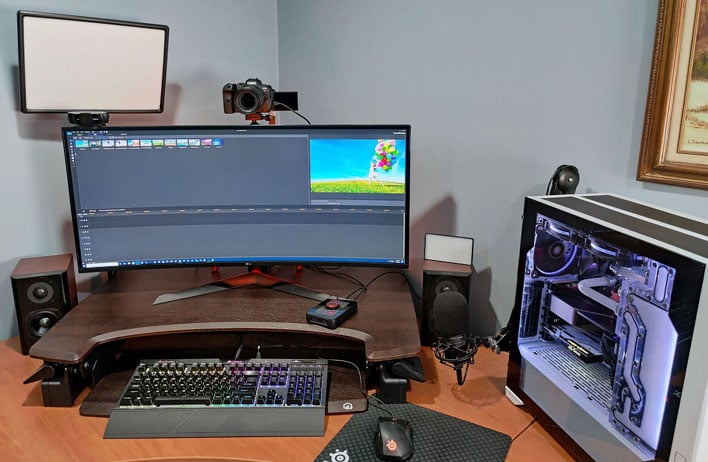 When we tested the XR1 with the Olympus cameras, we ran into a few issues. With both the Olympus EM1X and EM1 Mark III, the XR1 would connect and sync properly in monitor mode (which shows on-screen information) at resolutions from 1080p to 4K, but when the cameras were switched to record mode for clean HDMI output, at 4K they would show “No Connection” errors on-screen and we would not get any output. Record mode seemed to work properly at 1080p some of the time, but was unreliable. It would sometimes function properly, or at least appear to function properly, but when we tried to utilize the setup for Skype or Zoom, we would get a black screen for the video feed.

This same Olympus camera setups have worked properly at 1080p and 4K with an array of Elgato, and off-brand, inexpensive knock-off brand capture devices. While most HDMI sources should work without issue, there’s clearly some setups that do not quite handshake properly with some aspect of the XR1. EVGA and Olympus are aware of this and have not yet pinpointed the source of the conflict.

Using the XR1 for game capture is similarly straightforward, but getting the best quality is more nuanced. We will explore that next...
NEXT PAGE