AMD's Zen 4-based Ryzen 7000 processors have just barely hit the market. Still, progress marches on, and software developers are looking ahead to AMD's next generation based on the Zen 5 architecture. Those chips won't be here for a year or more, but at least one application is already adding support for them.


If you're a hardware enthusiast, then surely HWiNFO needs absolutely no introduction. This invaluable utility, as its name would suggest, scans a system's hardware details and then provides a comprehensive report on both the components in the system as well as their various states. It can even function as a hardware monitoring tool. 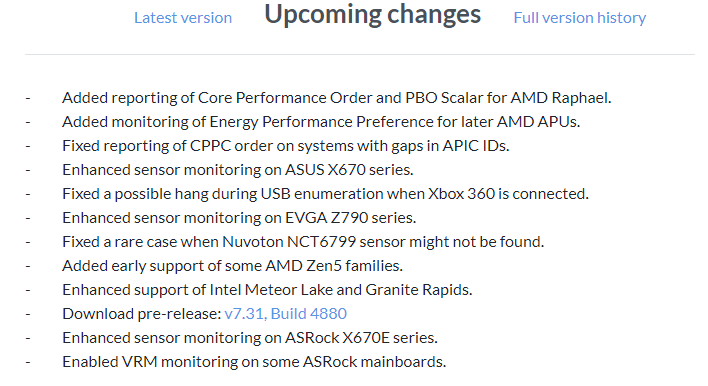 In the "Upcoming Changes" for HWiNFO's latest version, there's a curious update note: "Added early support of some AMD Zen5 families." To be honest, this probably just means that the next version of the software will be able to report processors based on Zen 5 as "AMD Zen 5" (or whatever model number) rather than simply saying "Unknown AMD CPU."


We haven't heard a peep from AMD about Zen 5 besides that it's in development, but it probably won't be more than a few months before we start seeing benchmark leaks. We've already seen a few leaks about Zen 5, including that it will supposedly be fabricated on TSMC's 3nm process despite the fact that Intel and Apple are supposedly tying up the foundry's capacity on that process.
The Zen 5-based Ryzen 8000 processors are also supposed to move to a hybrid architecture not unlike Intel's Alder Lake and Raptor Lake CPUs, supported by the filing of a patent that points that direction. It's unclear what AMD would be using for the "little cores" in this arrangement, but some have theorized that it could simply be a cut-down Zen 5 core similar to the way the company cut down Zen 2 for its ultra-low-power Mendocino processors.

Whatever ends up being the reality for Zen 5, at least we know that we'll be able to peek under the hood of such systems with free utilities like HWiNFO.