Regular HotHardware readers may recall us reporting last summer that Intel had supposedly stolen a march on AMD by snatching up all of TSMC's 3nm chip capacity. Obviously, the foundry can only produce so many chips in a given time frame, and reportedly, Intel was paying top dollar for first dibs on the bleeding-edge fabrication process.

This was particularly surprising, as unlike TSMC's other big customers (namely Apple, AMD, and NVIDIA), Intel is capable of fabricating its own chips. We could get into a lengthy discussion of why Intel wants TSMC's 3nm capacity so badly, but that earlier story was based on a rumor and not a done deal.


Except, apparently it was legitimate, because now DigiTimes is reporting that AMD will not be able to get its foot in the 3nm door until late 2024, or possibly even 2025. That's apparently because Intel and Apple have taken first and second position, respectively, and their orders are seemingly so large that all of 2023 is spoken for. As DigiTimes reports, even if AMD can requisition some fab space in 2024, those products won't be ready until the end of that year, at the earliest. 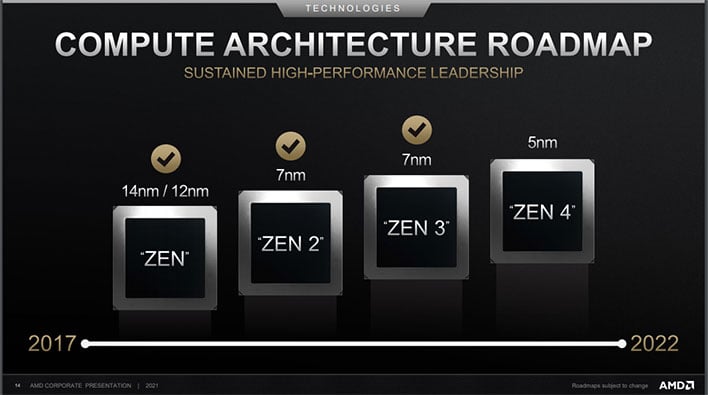 That doesn't put AMD in the best position for competing with Intel. In the short-term, AMD's Zen 4 processors are being or will be fabricated on TSMC's 5nm node, and they're still expected to appear later this year. This is more about the next generation, the little-discussed Zen 5. AMD will likely run a refresh of Zen 4 in between, so following naming trends these are likely to be the Ryzen 9000 series, or higher.

If AMD can't get space on the latest and greatest manufacturing process for its generation-after-next processors, it could be forced to delay them, depending on its circumstances. We don't know much about Zen 5; it's possible that AMD could transition the chip to the same 5nm process as Zen 4—although we saw how well that went with Intel's 11th-generation chips.

There's no need for doom and gloom. After all, comparing between Zen 2 to Zen 3—both fabricated on 7nm—there was quite an improvement architecturally. There's also the potential for AMD to exploit clever tricks like die stacking, which offers quite the step up on the Ryzen 7 5800X3D. After all, the 5nm process will be quite mature by that point, meaning high yields and relatively low cost compared to the bleeding-edge 3nm technology.

Still, it's impossible to deny that being on a previous-generation process would leave AMD starting at a significant disadvantage in performance-per-watt. For the red team's sake, let's hope it has a trick or two up its sleeve come 2024.