AMD is having the time of its life with Zen 3, and then in early 2022 (presumably), it will look to keep its momentum going with Zen 4, which is rumored to deliver a 20 percent IPC performance uplift. Looking even further down the roadmap, however, it is Zen 5 that could prove the most interesting of the bunch. AMD is not yet talking about Zen 5, but according to a recent leak, it will leverage TSMC's 3-nanometer manufacturing process.
As many of you reading this already know, AMD's current generation Zen 3 parts are manufactured on a 7nm node. AMD has also confirmed that Zen 4 will be built on a 5nm node, and we can expect DDR5 memory support as well. PCI Express 5.0, however, will not be included on consumer Zen 4 offerings, only on next-gen EPYC processors (if recent rumors are correct).
Looking ahead to Zen 5, the rumored shift to a 3nm node should bring better performance and improved power efficiency, as is typical when transitioning to a smaller manufacturing process. Its timely arrival will depend in large part on TSMC kicking off mass production of 3nm silicon in the second half of 2022, which would put AMD on track to launch its Zen 5 stacks in 2023 and/or 2024.
As with existing and previous launches, Zen 5 will underpin all of AMD's main processor lines, including its EPYC server CPUs (codename Turin), its consumer desktop processors (Ryzen 8000 series, codenamed Granite Ridge), and its APU lineup (codenamed Strix Point). 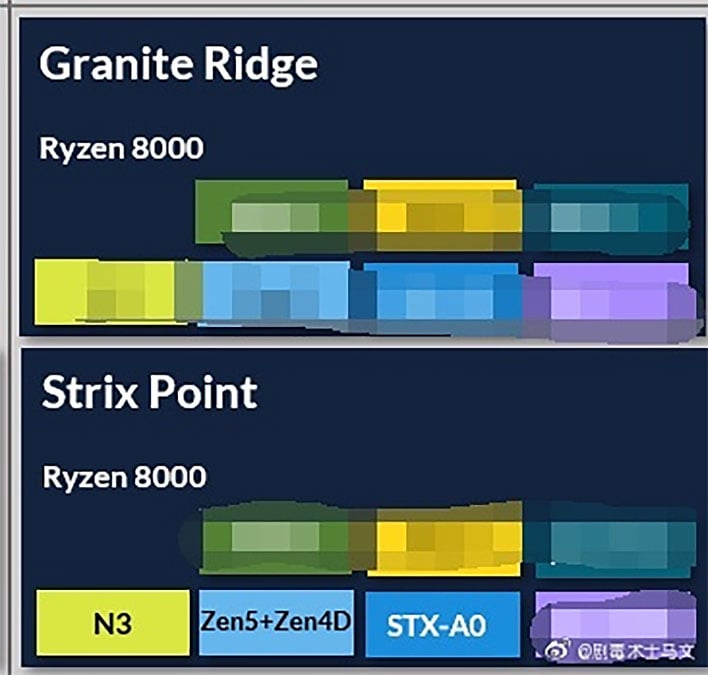 The rumor lines up with a partial roadmap posted to Weibo (shown above), which highlights both Strix Point and Granite Ridge. Most of the information is hidden, though in regards to Strix Point, it plainly attaches Zen 5 to TSMC's 3nm node (N3). Also interesting is the hybrid architecture that is in play, perhaps similar to what Intel will be doing with Alder Lake-S later this year.
Intel has not shared a ton about Alder Lake-S, but has confirmed it is a heterogeneous architecture that will pair high performance cores with power efficient cores in the same package. Arm has been doing this for forever and a day in the mobile space, with its big.LITTLE design, and it appears both Intel and AMD will give it a go on the x86 side.
According to the above image, AMD's Strix Point APUs will feature Zen 5 cores for heavy lifting, and smaller "Zen 4D" cores for lighter weight tasks. It's not clear exactly how Zen 4D will differ from Zen 4, but the combination of Zen 5 and Zen 4 in some capacity is certainly intriguing, if the leaked information ends up being true. It also shows that both Intel and AMD are confident that a hybrid architecture is the future of x86 computing. We shall see.