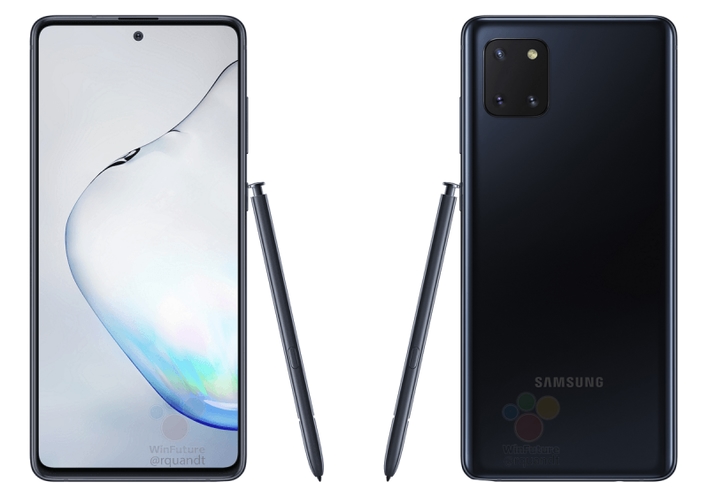 Samsung's Galaxy Note 10 flagship Android smartphone launched during the Summer of 2019, but the South Korean electronics giant is already looking to debut an update of sorts. We've been hearing rumors of the Galaxy Note 10 Lite for a few months, and recently we've been witness to leaked renders of the smartphone.

Today, the device has been spied out in the real word, confirming many of the previously rumored details of the device. For starters, we see a single selfie camera embedded in the top-center of the Infinity-O display, and a screenshot of the "About Phone" page in Settings shows that the Galaxy Note 10 Lite carries the designation SM-N770F/DS. We also get a good glimpse at the standard S-Pen, just like its beefier Galaxy Note 10 sibling. On the back of the device we see a square camera pod -- similar to that of the Google Pixel 4 and Apple iPhone 11 Pro -- complete with three image sensors and an LED flash.

Speaking of the cameras, all three -- primary, ultra-wide-angle, and 2x telephoto -- are rumored to be 12MP sensors. When it comes to hardware specs, things are a bit murkier. We've heard previous rumors that its Galaxy S10 Litecounterpart will be powered by a Qualcomm Snapdragon 855 SoC with 8GB of RAM. However, recent reports suggest that Galaxy Note 10 Lite will feature Samsung's own Exynos 9810 SoC, which was previously found in home market [South Korea] Galaxy S9 and Galaxy Note 9 smartphones.

Other specs rumored for the Galaxy Note 10 Lite include 128GB of onboard storage (augmented by a microSD slot for expansion), Bluetooth 5.0 and a 3.5mm headphone jack. That latter port is a curious addition given that smartphone OEMs have increasingly been ditching the headphone jack. But given that Samsung's "Lite" smartphones will be hitting lower price points, perhaps the company is adopting the Google approach with the Pixel 3a and upcoming Pixel 4a (both of which have a 3.5mm headphone jack).

Previous rumors had suggested that the Galaxy S10 Lite and Galaxy Note 10 Lite would launch in late December, but that time has come and gone. The next logical avenue for Samsung to launch the devices will be next week at CES 2020 in Las Vegas.