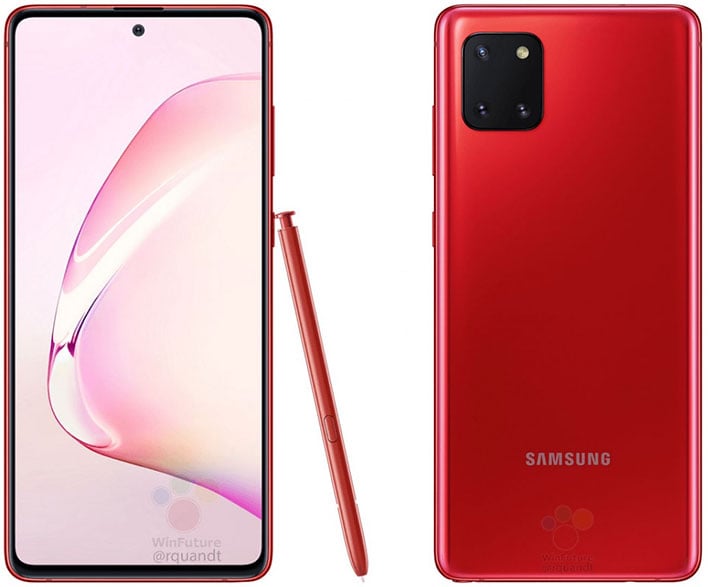 Rumors have been swirling of a new Galaxy Note 10 Lite model joining the fray, and lest there be any doubt the new SKU is in Samsung's roadmap, a batch of legitimate looking press renders have found their way to the web. There are over a dozen renders in all, which show the front and back of the Galaxy Note 10 Lite.
If the renders are in fact real, then the Galaxy Note 10 Lite will launch in at least three different color options, including black, red, and silver. The red is particularly striking in our opinion, though all three have the usual premium look to them that we have come to expect from Samsung's Galaxy series.

One thing that stands out in the renders is the flat display. This would mark a departure from the rest of the Galaxy Note 10 lineup, which have screens that curve around the edges. And actually, the last Galaxy Note to wield a flat panel was the Galaxy Note 5 from all the way back in 2015.
Samsung is also going with a punch-hole cutout for the front-facing camera, according to the leaked renders. It sits dead center at the top of the phone, same as the other Galaxy Note 10 handsets. It's not yet known what specific sensor Samsung will plop in the Galaxy Note 10 Lite, and from the looks of things, it does not appear as though a depth sensor will accompany the selfie cam.
Around back, we see a triple-camera arrangement flanked by an LED flash. The assembly sits inside a rather large rectangular housing on the upper left of the phone. It is somewhat similar looking to what leaked renders of the upcoming Galaxy S11 show, though not identical.
Several of the renders also depict the mighty S Pen, which is a staple of the Galaxy Note series. Interestingly, the power button sits on the left side of the phone, according to the renders, so the S Pen will likely slide into the right side of the phone.
Rumor has it Samsung will announced the Galaxy Note 10 Lite on December 27, so we don't have long to wait for all of the nitty-gritty details.