Building a dual-screen device is one thing, leveraging it is another matter. The latter requires proper software support. To help with that, Microsoft is working on an experimental feature for Chromium called "dual-screen emulation," which is pretty much exactly what it sounds like—it adds dual-screen emulation support to Chromium-based browsers.
Why Chromium? Microsoft has a vested interest in adding support ever since the company overhauled its Edge browser. The latest version of Edge is built around Chromium, the same foundation that Google's own Chrome browser is built on top of, so it makes sense. Interestingly, Edge is the second most popular browser, coming in behind (way behind) Chrome and just ahead of Mozilla's Firefox browser. 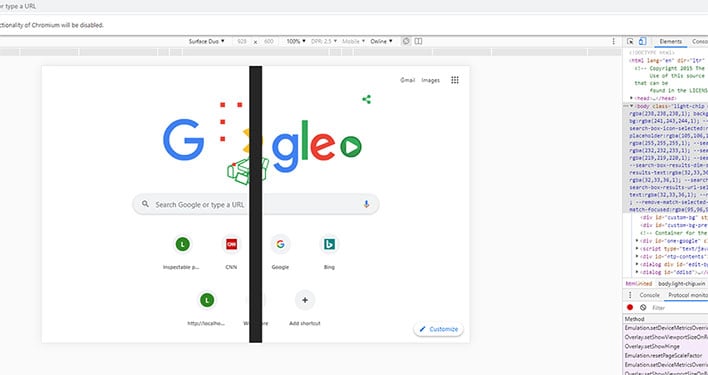 Initially, the dual-screen emulation mode supports Microsoft's own Surface Duo and Samsung's Galaxy Fold 2. It works in both horizontal and vertical modes. Microsoft also notes that a device may have a hinge in dual-screen mode, as shown in the image above.
"Emulation bar has an extra button to span: extending the device view from single screen to dual screen. New icons are added. Rotation and other emulation related functions work fine with the presence of a hinge," Microsoft notes on the Chromium feature listing.
It remains to be seen how popular dual-screen devices will ultimately be, but in the meantime, Microsoft is laying the groundwork on the software side to support them. Last year, for example, Microsoft uploaded a document to GitHub discussing "enlightened experiences on foldable devices."

"Web developers targeting dual-screen and foldable devices want to be able to effectively lay out the content in a window that spans multiple display regions. However, the web platform does not yet provide the necessary primitives for building layouts that are optimized for dual-screen or foldable experiences," Microsoft noted.
Microsoft proposed several APIs at the time, including one called Screen Enumeration API Explainer. This would provide information about the physical configuration so that developers could better leverage dual-screen devices.