Lots of smartphone and tablet users have been excited at the prospect of the Microsoft Surface Duo that skirts the line between the two devices with a fold-out screen and the ability to make calls and have a larger screen for work or play. Holiday 2020 is when we thought the device would land, but rumors continue to persist that the Surface Duo Android phone might be ready sooner than we think.

Sources who claim to know what Microsoft is cooking up say the hardware and software for the Surface Duo are essentially done. Microsoft is reportedly working on finalizing the top-level OS customization and in-box app experiences that are specific to Surface Duo. That the software and hardware are complete isn't a surprise, we've seen the Surface Duo turn up on video recently, and it certainly looked ready to roll. 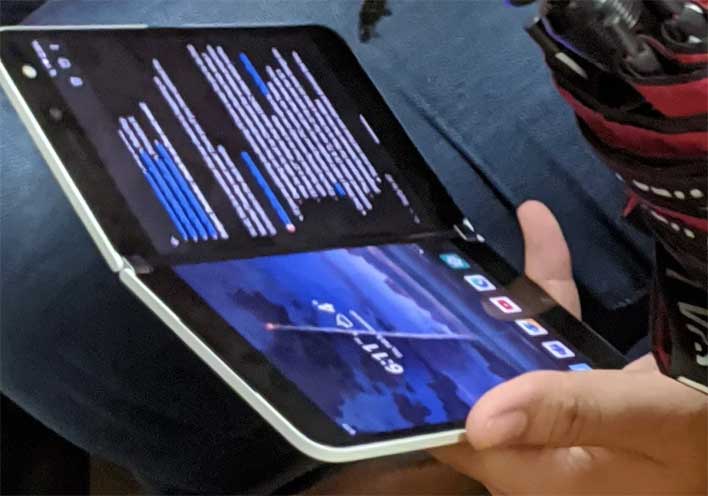 An image of the device has also turned up that appear to be from the same video taken on some sort of public transportation showing a device with a form factor that will appeal to many. We've also seen what appears to be a press rendering of the device leak. According to the new rumors, the Surface Duo items that Microsoft has left to do could be complete by early April. A finished device in early April could lead to shipping in limited quantities this summer.

With so many factories shut down due to coronavirus, how limited quantities might be is a mystery. Speculation suggests that availability would be announced this spring along with the Surface Go 2 and Surface Book 3. Hardware tipped to turn up inside the Surface Duo includes a Snapdragon 855, 6GB of RAM, and 64GB of internal storage for the basic model. The Snapdragon 855 will be used across the board, but there will be versions with more RAM and storage. Sadly, 5G support isn't expected since Duo is using last year's high-end processor. The reason for the less than cutting-edge hardware is blamed on the very long development cycle of the device.