Intel is of course releasing a full lineup of Raptor Lake processors when those chips hit the market. Anyone could reasonably infer that we'll see CPUs with Core i3, Core i5, Core i7, and Core i9 branding, but the specifications of those models weren't clear until Bilibili hardware dude ExtremePlayer leaked a list of what purports to be the full product stack.

The list, reproduced below, includes some fourteen different SKUs across three different pieces of silicon, although five of the models are duplicates without integrated graphics. It appears that, just like with Alder Lake, the Core i9, Core i7, and top-end Core i5 models will share a die, while a smaller die will be used for the rest of the Core i5 family. New for the 13th-gen family is a yet-smaller die with no E-cores that will apparently be used for the Core i3-13100.

One of the most fascinating details about these processors, Boost Clock, isn't included on the chart. That's probably because they aren't even finalized yet. The rest of the chart lines up with earlier leaks and mostly isn't surprising, although we are a little bit impressed to see the additional E-cores promised with Raptor Lake make it so far down the product stack. You have to head all the way down to the Core i5-13400 before you see a CPU with less than 14 total cores.

Indeed, this may be the biggest gap between Core i3 and Core i5 to date. The Core i3-13100 lacks any E-cores whatsoever along with having just 4 P-cores. With that said, this chart probably doesn't include every 13th-gen desktop CPU that Intel will eventually release, and there will likely be some slightly higher-end Core i3 models to correspond with the Core i3-12300 from last generation. The two cheapest chips on the chart also take a cut to just 75% of the GPU horsepower of their higher-end siblings.


According to leaker HXL (@9550pro on Twitter), only the B0-stepping processors on the higher-end are actually using new Raptor Lake silicon. Supposedly, the C0 and H0 chips will be using refreshed Alder Lake silicon, and he says that the same will be true for lower-end laptop processors as well. This has some implications for the performance of the lower-end Core i5 models versus the Core i5-13600K, as the Raptor Lake silicon has increased cache allotments compared to Alder Lake. 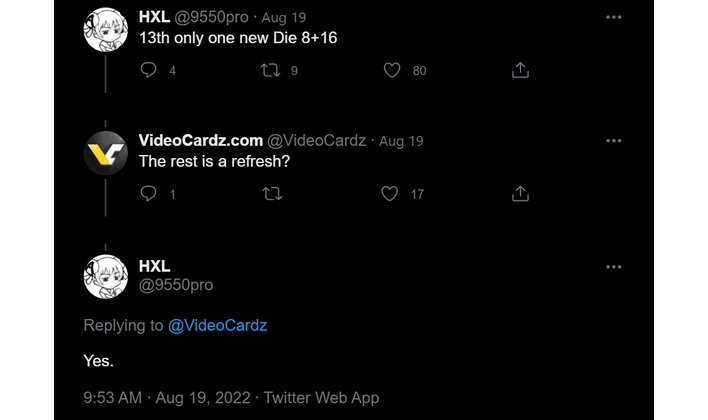 While this chart doesn't show boost frequencies, the leaks and rumors that we have already seen have implied some pretty crazy things about the clock rates of Raptor Lake. Those details probably only apply to the K-series models, which have elevated PL1 and PL2 ratings compared to the non-K models. This is visible in their base clocks, where the overclockable "K SKU" chips are sporting base clocks as much as 1.3 GHz higher than their non-K counterparts.

Base clock doesn't tell you much about real-world performance, but in this case, particularly for multi-core workloads, we expect the higher TDP alone will result in significant performance differences between the suffix-less and "K" models. We'll find out when these CPUs launch, which could be at Intel's Innovation event starting September 27th.