It would be pretty reasonable to expect Intel's next-gen Raptor Lake processors to not overclock very well. After all, they share the same manufacturing process as its current-generation Alder Lake processors, and those chips already run darn hot at stock configurations.


Well, there is at least a little headroom in the 13th-generation Core CPUs—at least in the early samples. A CPU-Z result posted up by QXE (@QXE87 on Twitter) shows a Core i7-13700K qualification sample hitting 6.18 GHz on all eight of its performance cores, while the E-cores hit 4.19 GHz. 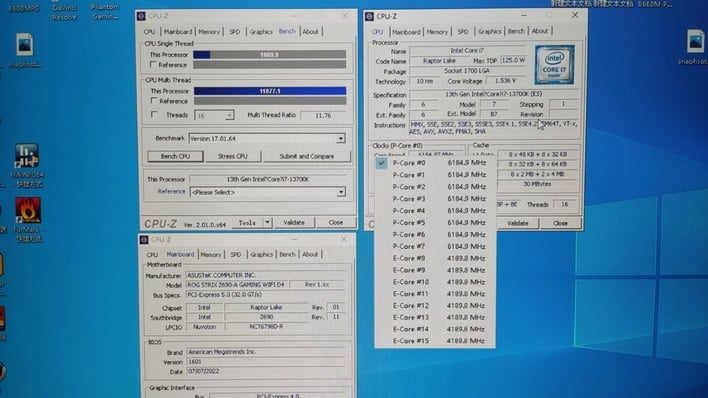 Achieving such a ludicrous clock rate requires a brutal core voltage of 1.536 volts. It certainly is not something we would recommend for long-term use, but the chip was stable enough to complete a CPU-Z benchmark. As you can see above, it posted up 1009.9 points on the single-threaded test and 11877 points on the multi-threaded test.

To be clear, this is the highest single-threaded result we have ever seen. Admittedly, the CPU-Z benchmark is purely synthetic, and thus is not really representative of performance in any particular workload—which is why we don't usually use it in our testing—but it does match up pretty well with tasks that are tightly bound by CPU compute.


While QXE did not elaborate about what kind of cooling was used on the CPU, he did say that Raptor Lake should be easy to cool at voltages as high as 1.3v. That's likely thanks to refinements in the Intel 7 process used to fabricate these chips. 1.3v is widely considered the maximum "safe" voltage for chips made on Intel 7, and it can be hard to cool Alder Lake at that voltage. 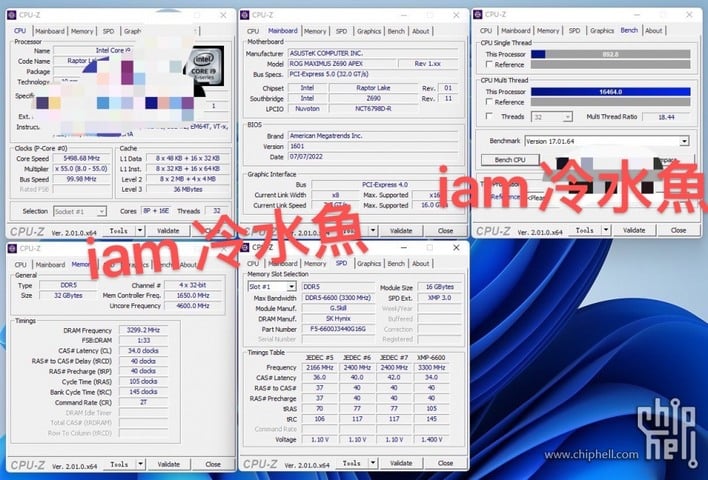 There's another interesting Raptor Lake result making the rounds today, too. Leaker HXL (@9550pro on Twitter) pointed out this result, which was originally posted to the Chinese-language ChipHell forums. It's another CPU-Z result, and although the benchmark is not the interesting part, we'll note that this Core i9-13900K qualification sample scores an even higher multi-threaded result than the overclocked CPU above, thanks to having double the number of E-cores.

While this chip is running at its stock clocks, but the memory is anything but. CPU-Z reports a DRAM frequency of 3300 MHz, which translates to DDR5-6600. The CAS latency is an impressive 34 clocks, too, although the rest of the latencies are nothing to write home about. The memory also apparently requires a concerningly-high 1.4V to do its thing—quite a bit higher than the 1.1v standard for DDR5 memory.

A lot of people have written a lot of predictions across web forums and comment sections declaring that Zen 4 or Raptor Lake will be the victor this holiday season. We are not ready to make those conclusions until we have hardware in hand and hold them to the fire. Both AMD and Intel's next-generation processors look quite impressive, and there's no telling yet who will have the better product.