Leakers are having a heyday right now over impending hardware launches from AMD, NVIDIA, and Intel. Intel in particular has had its 13th generation Raptor Lake processors exposed in various benchmarks which highlighted its single-threaded might. This new leak shows the flagship Core i9-13900K trouncing its Core i9-12900K predecessor in a multi-threaded Cinebench workload.


This specific test was posted by Raichu (@OneRaichu on Twitter), who has a history of sharing legit Intel leaks, although in this case it's less "leak" and more "early test." Indeed, Raichu's CPU appears to be a 13th-generation Core CPU in its final silicon form. 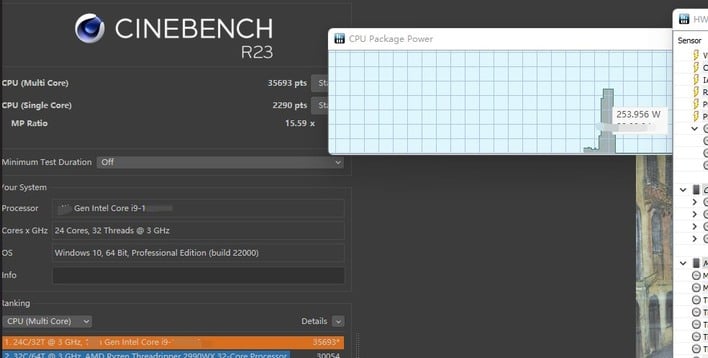 The CPU in question is blurred in the screenshots, but we can surmise from other information available in the images that it is a Core i9-13900K. That'll be the top-end model of Raptor Lake desktop parts, sporting eight Raptor Cove P-cores and sixteen Gracemont E-cores for a total of 24 cores and 32 threads. 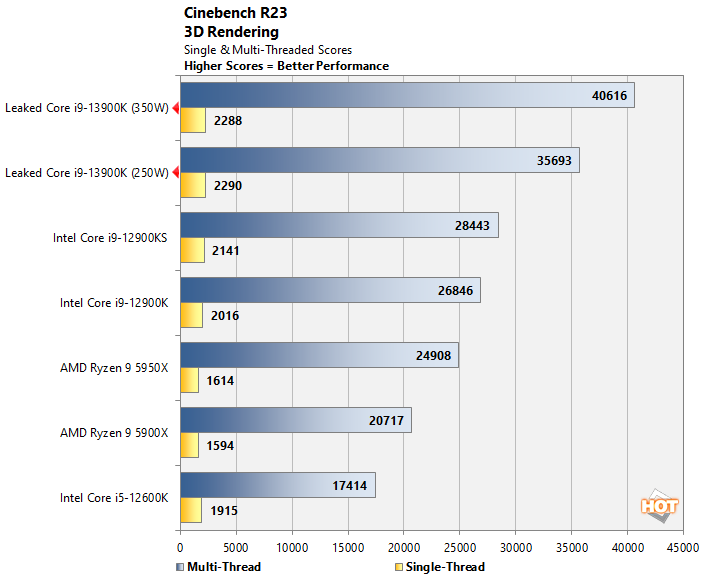 Raichu tested the chip in Cinebench using both the default power limit of 250 watts as well as with the power and current limits removed. In the former setting, the chip was able to put out a single-core score of 2290, which basically demolishes everything on the market. The multi-core score is even more impressive: 35,693 points, putting it around 40% ahead of the Ryzen 9 5950X and some 25% ahead of the Core i9-12900KS.

Alright, sure—Cinebench may not be the most exciting benchmark. It's a real benchmark, though; it's based on Maxon's Cinema 4D rendering software and is quite representative of performance in that workload. Cinebench performance tends to translate well to other highly CPU-bound compute workloads as well.

Unlocking the power and current limits allows the chip to boost higher across all cores. As expected, the single-core score doesn't practically change, but the multi-core score rises to 40,616 points. By our reckoning, this puts the Core i9-13900K some 63% ahead of the Ryzen 9 5950X, and nearly 43% ahead of the Core i9-12900KS.
Of course, unlocking the power limits does have a price—literally, on your power bill. The unlocked chip, despite not being manually overclocked at all, pulls some 345 watts when fully loaded. That's going to be tough to cool, and it makes the Core i9-12900KS look like a lightweight. Even without having its limiters removed, the Core i9-13900K sucks down about 250 watts, though.

This leak also confirms the boost clock rates of the P-cores in this CPU: up to 5.5 GHz on all cores, and as high as 5.8 GHz on two cores. The extremely high clock rates make it clear why these CPUs are so power-thirsty. It will be fascinating to see how AMD's Ryzen 7000 processors compare once both chips have hit the market this Winter.