Intel's Raptor Lake on the desktop is a great success, but what's next for the boys in blue? According to the latest leaks, it looks like a Raptor Lake refresh is in the cards for mid-2023. That's just one part of a pretty significant bundle of data from regular leakster HXL (@9550pro on Twitter) that also includes information about HEDT platforms and processors as well as Intel's soon-to-be-released 6 GHz CPU. 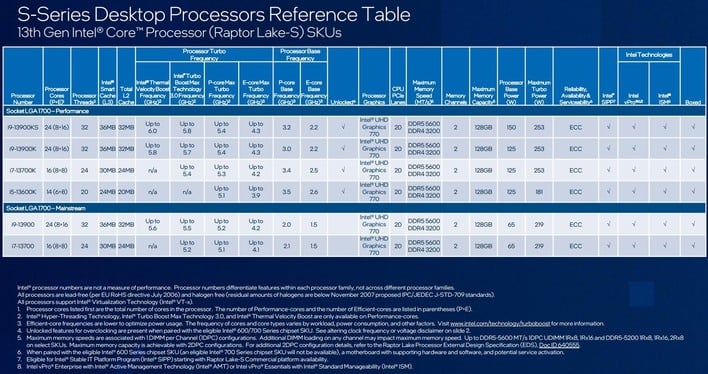 All of these images are really small, so click to enlarge them.


We'll start from the soonest: a leaked "S-Series Desktop Processors Reference Table" for Intel's 13th-gen Core processors includes the three launched Raptor Lake CPUs alongside locked Core i7-13700 and Core i9-13900 CPUs with lower 65W base power limits, and then at the top, the promised Core i9-13900KS.


Just as expected, the CPU is nearly identical to the Core i9-13900K besides that it gets a 100 MHz bump to its Turbo Boost Max clock and a 200 MHz increase in Thermal Velocity Boost, bringing those to 5.8 GHz and 6.0 GHz, respectively. The only other change in specs seems to be an increase in the processor's base power, from 125W to 150W. The maximum turbo power hasn't changed, so total power consumption isn't likely to be much different. 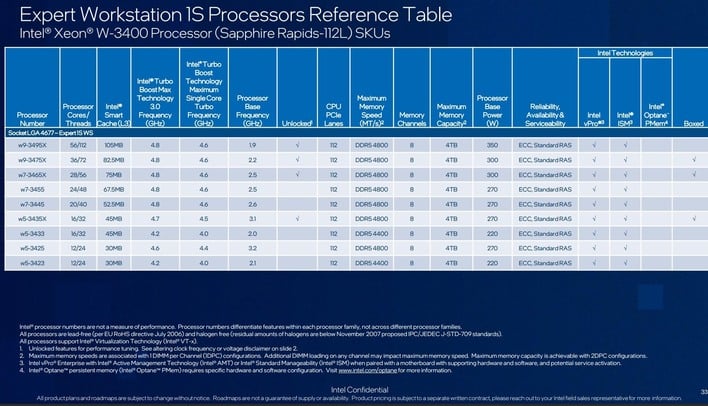 Next up on the timeline, at least according to these leaked roadmaps, are Sapphire Rapids workstation chips. The top-end dual-socket workstation market will be served by chips from the same silicon as Intel's Xeon Scalable family, while the HEDT-like W790 chipset and its associated Sapphire Rapids-64L and Sapphire Rapids-112L processors will come along early next year, as previously rumored.

Of course, the "64L" and "112" markers on those processor names indicate the number of PCIe lanes available to the processors, but there's a lot more separating the two families besides that. Despite them sharing an LGA 4677 socket, the "112L" chips—which Intel calls "Expert Workstation"—are much more closely-related to the Xeon Scalable processors, sporting 8-channel memory and up to 56 CPU cores. Meanwhile, the "64L" or "Mainstream" chips top out at 24 cores and quad-channel DDR5 memory. 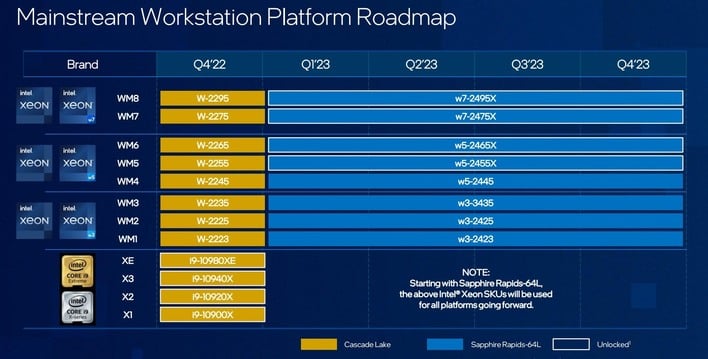 Notably, the Core-X nomenclature is confirmed to be completely dead by an Intel "Mainstream Workstation Platform Roadmap" slide. The company lists the extant Core i9-X series chips as currently available, and then in a blank space for 2023, there's a note that says that the Sapphire Rapids-64L CPUs will be replacing them going forward. Four of the Xeon CPUs, including two from the Xeon w5 family and two from the Xeon x7 family, end with an "X" and are marked as unlocked for overclocking, so that should let HEDT enthusiasts get their high-powered fix. 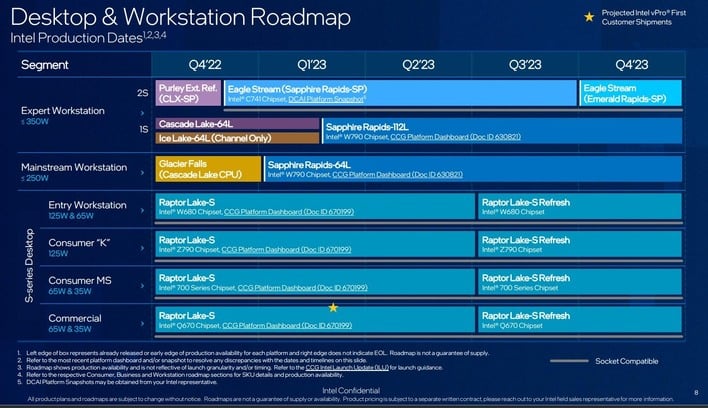 Sadly, there's no information on these CPUs beyond that, but the fact of their existence is enough to ponder. Even if Meteor Lake remains the "14th-generation", its apparent delay (at least on desktop) is enough to cause concern. Then again, rumors have always been that Meteor Lake is focused on mobile systems. It's possible that we won't see much of a Meteor Lake presence on desktop at all, similar to how Tiger Lake was exclusive to laptops.