Intel's processors include hardware to help with monitoring their own performance. Unsurprisingly, these are known as "Performance Monitoring Units" (PMU). The company releases JSON files that map the raw data provided by the PMUs to human-readable events and has already released one for its 14th-generation Meteor Lake processors. From reading those, the Coelacanth has figured out that Meteor Lake's Crestmont cores will be a significant change from the Gracemont cores used in Alder Lake and Raptor Lake.


Let's step back for a second. The codename for Intel's extant Core processors is "Alder Lake", or "ADL" in short form. Its upcoming 13th-gen processors are known as "Raptor Lake" (RPL), and their chiplet-based successors will be the 14th-gen "Meteor Lake" (MTL) processors.

Over in the Perfmon directory at Intel's 01 open source website, we can find an "MTL" folder, and in that folder you can find a couple of JSON files that are named meteorlake_crestmont_core and meteorlake_redwoodcove_core. The names of the cores aren't anything new; we first heard about Redwood Cove back in 2020.


What is a bit surprising is the detail that Japanese hardware blog Coelacanth's Dream has pointed out from the logs. In these files, the identifiers used to specify the core architectures used for Performance and Efficiency cores in these hybrid processors are different from the standard CPUID identifiers. They're known as "Native Model IDs," and they start from zero with Lakefield's Sunny Cove and Tremont cores. 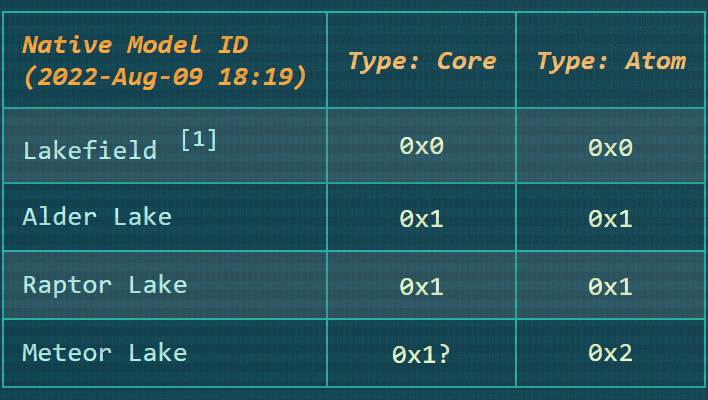 Alder Lake incremented both numbers by one with its revised Golden Cove and Gracemont cores, the former being the P-core architecture and the latter being the E-core architecture. According to the perfmon JSON files, neither Raptor Lake nor Meteor Lake will increment the Native Model ID for their P-cores. That can be interpreted as meaning that both Raptor Cove and Redwood Cove are minor revisions on ADL's Golden Cove.
Meanwhile, Raptor Lake is known to carry forward the Gracemont design from Alder Lake, but it seems like the Crestmont E-cores in Meteor Lake will be a significant revision. That's based on the fact that the first increment of either Native Model ID since Alder Lake will be for Crestmont. Unfortunately, this information doesn't actually tell us anything about what will be changed in Crestmont.

Arguably the more interesting news is that Redwood Cove could be another revision of the Golden Cove architecture. Way back in May, leaker Raichu (@OneRaichu on Twitter) noted that Redwood Cove will focus on efficiency improvements at every level, including the core architecture. This is likely because the Intel 4 process that Meteor Lake will be using can't reach the same insane clock rates that Intel's mature "Intel 7" process can. More recently, fellow leakers @harukaze5719 and @9550pro had the same discussion after the Coelacanth's post above.


As a result, it seems like Meteor Lake may not offer much improvement in performance over Raptor Lake, at least for high-powered desktop processors. However, the performance-per-clock should be improved considerably, which means power-limited platforms like laptops should see huge gains.

For his part, Raichu says that Golden Cove in its current form has significant inefficiencies with regard to instruction execution, and that it isn't performing to its full potential. Perhaps changes with Raptor Cove and Redwood Cove will unlock the full speed of the core architecture.