A Chinese tech enthusiast has shared what he claims to be a screenshot from a PC with a Core i9-13900KS under the hood. The Bilibili poster isn’t a source we are familiar with, so please take this information with an unhealthy pinch of salt. However, the PC screenshot is rather special—showing the purported CPU-Z benchmark results from a 13th Gen Intel Core i9-13900KS. This Raptor Lake chip wasn’t revealed at the Intel Innovation event which wraps up today, only briefly teased (but not by name) by CEO Pat Gelsinger.

AMD recently launched its Ryzen 7000 line of desktop CPUs and we tested the flagship Ryzen R9 7950X and R9 7900X in an extensive review just a few days ago. We were impressed by fantastic gains delivered by the Zen 4 microarchitecture, but they may be very short lived champions, if this leaked CPU-Z score is any indication. Yes, the 13900KS may be a few months away, but the 13900K is confirmed to be arriving at retail in three weeks time (Oct 20). 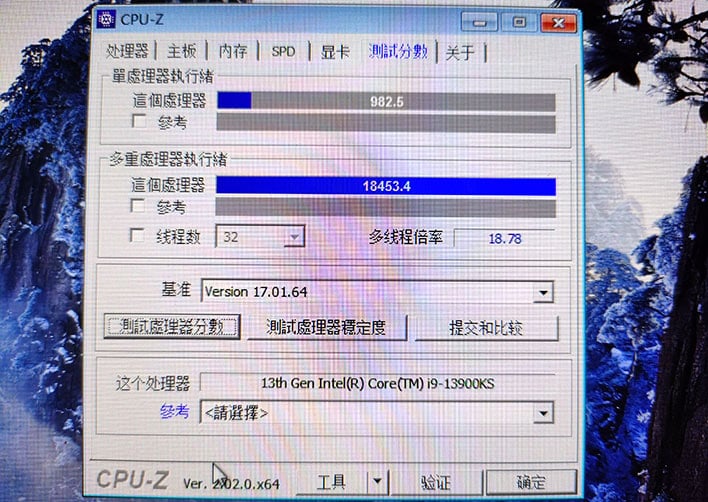 Taking the shared CPU-Z screenshot at face value, this upcoming tuned golden sample version of the 13900K scores 982.5 in the single threaded (1T) test, and 18,453.4 in the multi-threaded (nT) test. Those are very good scores, and for readers that haven’t memorized the 1T and nT results for a swathe of competitive modern processors, please check out our little comparison chart below: 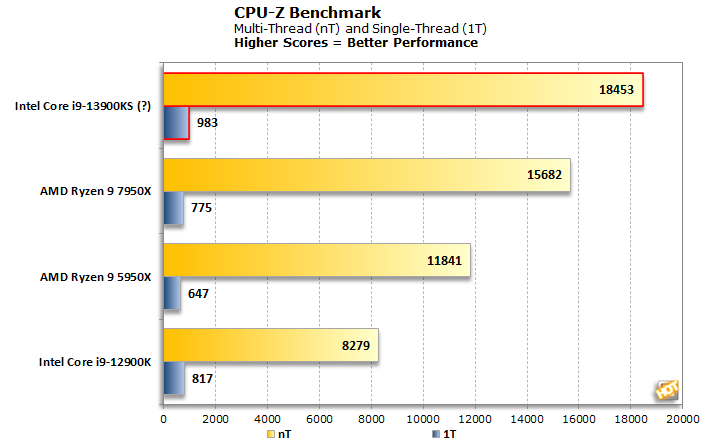 Remember to take the leaked i9-13900KS information and benchmark scores with a pinch of salt. However, if you are happy with your sodium intake and have room for a little more today, it is interesting to see the same Bilibili poster mention that Intel is brewing up two new CPUs for the Chinese market; the Core i5-13490F and Core i7-13790F.

With the 12th Generation Intel Core Alder Lake processors, we saw Intel release a special value chip for China, perhaps targeting the popular eSports café culture there. That was the Intel Core i5-12490F. So it looks like Intel is preparing a direct successor and going one further and rolling out the same idea to the Core i7 line. Without further details, or any hints at the specs, we can’t really say whether we would like the new Core i7-13790F to launch in the West, or not.