After months of anticipation, leaks, and rumors, Intel on Tuesday finally lifted the veil on is 11th Gen Core desktop processors, codenamed Rocket Lake-S, along with an accompanying 500 series chipset for motherboard makers to wring the most performance possible out of the new chips. The initial announcement was not the end of it, though. Late last night, Intel sent members of the press some additional information about a feature it is calling Adaptive Boost.
This is yet another way to temporarily ramp up the clocks on certain processors, for improved performance when and where needed. All of Intel's Rocket Lake-S CPUs already have a designated max Turbo frequency, and can go even higher via Turbo Boost 2.0 and Turbo Boost 3.0. Plus there is Intel's Thermal Velocity Boost, which kicks up single-core and multi-core frequencies yet even higher, when there is sufficient cooling (see our Comet Lake-S review for how this affects performance).

Now we can add Adaptive Boost to the mix, which from Intel's vantage point, is not an overclocking mechanism. So, what does it do? 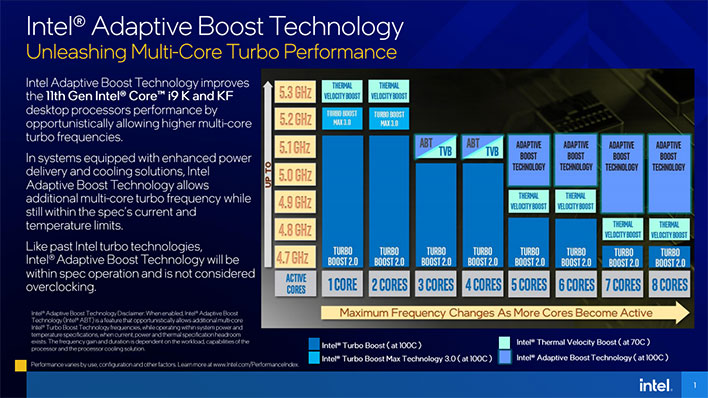 "When enabled, Intel Adaptive Boost Technology (Intel ABT) is a feature that opportunistically allows additional multi-core Intel Turbo Boost frequencies, while operating within system power and temperature specifications, when current power and thermal specification headroom exists," Intel explains.
In other words, it is an enhancement to Thermal Velocity Boost, allowing for even higher turbo clocks under certain power and cooling conditions. 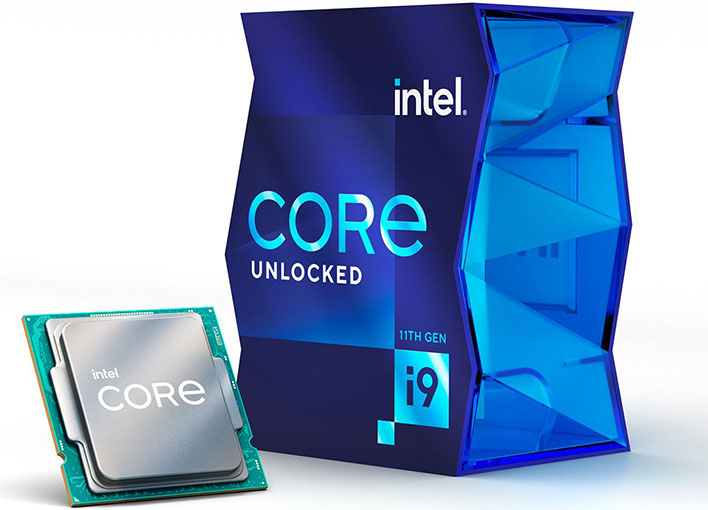 Intel's Adaptive Boost feature is limited to its 11th Gen Core i9 K and KF models, which at present time consists of two CPUs: Core i9-11900K and Core i9-11900KF. Both are 8-core/16-thread CPUs with a 3.5GHz base clock, and up to a 5.3GHz single-core turbo clock and 4.8GHz multi-core turbo clock both via Thermal Velocity Boost.
Looking at the slide above, Adaptive Boost will press the pedal to the metal on 3-8 cores. Those cores will be able to ramp up to 5.1GHz under certain conditions. That includes all eight cores, which otherwise would top out at a max 4.8GHz frequency utilizing Thermal Velocity Boost without an assist from Adaptive Boost. That works out to a not-insignificant additional 300MHz for multi-threaded workloads.

It seems this is made possible by loosening the temperature restrictions. Thermal Velocity Boost kicks in when temps are 70C or below, whereas Adaptive Boost allows the CPU cores to operate at up to 100C before disengaging.
One thing Intel has not clarified (yet) is if this will work with 400 series motherboards, or more likely will require a 500 series motherboard. In any event, it's a nice performance perk for Rocket Lake-S owners who have sufficient cooling to handle higher clocks. And technically, it's not an overclock.