NVIDIA finds itself as the sole player in the next-gen GPU market with its GeForce RTX 4090 and GeForce RTX 4080 graphics card, and that will continue to be the case until AMD releases its Radeon RX 7900 XTX and Radeon RX 7900 XT to retail next week. Interestingly, and maybe not coincidentally, NVIDIA just lowered the price of both Ada Lovelace GPUs in Europe.
Optimistically, we'd like to say this because of AMD's impending arrival onto the next-gen GPU battlefield. And maybe that actually played a role in NVIDIA's decision. More likely, though, the ~5 percent price cut on both GPUs probably has more to do with inflation in Germany and its impact on the exchange rate of the Euro. Whatever the case, though, both cards are now officially cheaper in Europe than at launch. Here's a look... 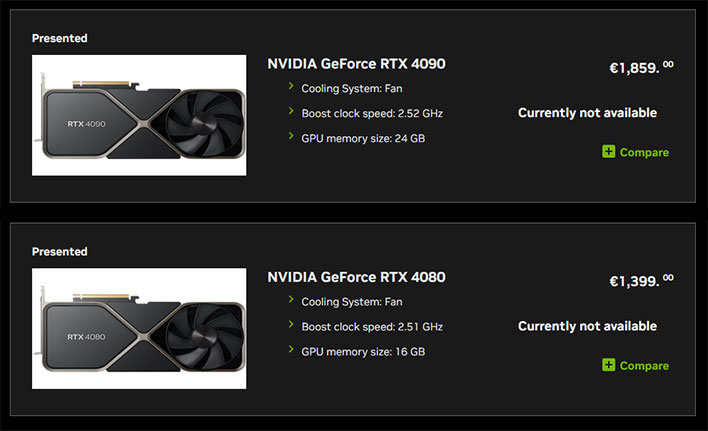 NVIDIA reduced the MSRP of its GeForce RTX 4090 Founders Edition model from €1,949 to €1,849, and the GeForce RTX 4080 Founders Edition from €1,469 to €1,399.Those amount to 5.1 percent and 4.8 percent reductions, respectively. These are official price cuts that appear on NVIDIA's product pages in Germany (which we've spliced together and Google Translated above).

This is especially interesting in regards to the GeForce RTX 4080, a GPU that hasn't been without controversy. It started with the initial introduction of two models with different memory configs (16GB and 12GB) and very different specifications. The backlash ultimately prompted NVIDIA to "unlaunch" the 12GB model, leaving the 16GB configuration as the only GeForce RTX 4080 SKU.
The GeForce RTX 4080 16GB starts at $1,199 in the US, compared to $1,599 for the GeForce RTX 4090. As it turns out, scalpers appear to having a tougher time moving GeForce RTX 4080 models for significant markups. For example, this Gigabyte Eagle OC variant fetched $1,299 on eBay, which is only $100 above the MSRP for a stock-clocked FE model. Same goes for this MSI Ventus 3X model—it recently sold on eBay for $1,291.27 shipped.
There are several listings that show the GeForce RTX 4080 selling for higher markups, but generally speaking, the GeForce RTX 4090 is proving more lucrative for scalpers—some are topping $2,500 or even $2,600 on eBay.
Given that both cards are selling, it's unlikely NVIDIA will be motivated the drop the price on either model any time soon, especially with lower-end models presumably getting announced at or around CES. That could change, though, depending on how AMD's next-gen GPUs fare and are received.
In any event, fist-bump to HardwareLUXX for spotting the revised pricing.