The Galaxy Note 20 family of smartphones are just over a month away from release, but it looks as though Samsung has already leaked images of the device. In this case, the alleged Galaxy Note 20 Ultra appeared on Samsung's Russian language website wearing a rather fetching copper-toned finish.

We only get a glimpse of the device from the back and from the side, but we can see what looks to be two standard camera sensors along with a periscope zoom lens at the bottom of the rear camera pod. As for the copper/bronze finish, this was already confirmed by Ice Universe in a tweet earlier this morning. The color is also used for the device's S Pen.

The Galaxy Note 20 Ultra is rumored to come to market with a Snapdragon 865 SoC (Snapdragon 865+ if there's any truth to recent rumors that Qualcomm will launch a flagship "+" variant this year) and at least 16GB of RAM. We're also expecting a 120Hz QHD+ display that uses low-temperature polycrystalline oxide (LTPO) technology also seen on the Apple Watch Series 5.

Compared to its predecessor, the Galaxy Note 10+, the Galaxy Note 20 Ultra is said to be thinner and narrower and include smaller display bezels. Samsung has also allegedly even paid attention to the hole punch cut-out for the selfie camera, which is reportedly 1mm smaller. 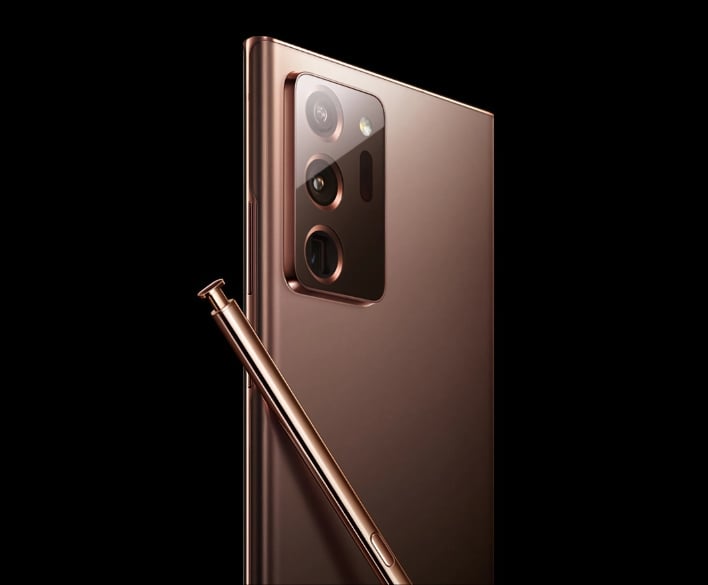 As for the cameras, at least one of those rear cameras is said to feature a 108MP sensor, although we hope it likely won't have any of the issues that plagued the Galaxy S20 Ultra shortly after its launch. Samsung said at the time that the focus issues inherent with the sensor couldn't be fixed with software, which meant that customers pretty much have to deal with it.

It's expected that the Samsung Galaxy Note 20 family will launch on August 5th, where it will be joined by the Galaxy Watch 3, Galaxy Z Flip 5G and potentially the Galaxy Fold 2.