Coinciding with the launch of Intel 10th generation Comet Lake-H processors is the arrival of the GeForce RTX Super mobile GPU refresh from NVIDIA. The company is launching the GeForce RTX 2070 Super and the RTX 2080 Super for laptops, both of which now support enhanced Max-Q Technologies.

This time around, NVIDIA is bundling in some new features under the Max-Q Technology umbrella to enable even thinner and lighter laptops. When all of the new features are combined, NVIDIA is touting up to a 2X improvement in efficiency over previous Max-Q implementations in gaming laptops. Among these new additions are Dynamic Boost, which brings automatic and intelligent per-frame balancing of CPU and GPU power. 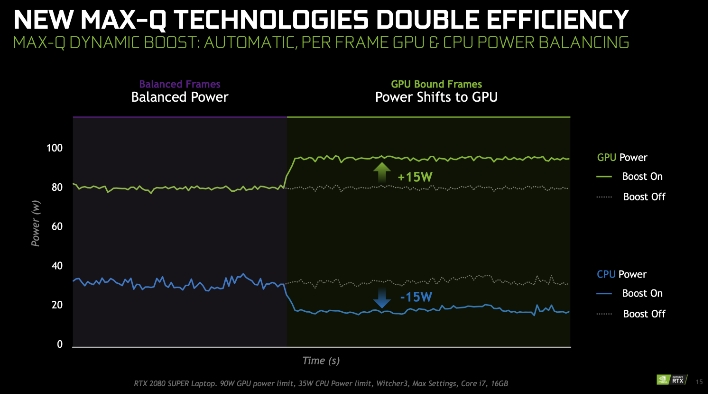 The aim is to improve overall gaming performance with less of any impact in overall power consumption but also with better load balancing between CPU and GPU workloads. It appears to be similar in practice to AMD SmartShift that's going to be available with Ryzen 4000 CPUs and Radeon GPUs, in that TDP can be allocated away from the CPU to boost the GPU, or vice-versa, while staying within a given power budget -- in real-time, frame by frame. NVIDIA is also using next-generation voltage regulator technologies for improved graphics performance along with low-voltage GDDR6 memory to improve power efficiency. 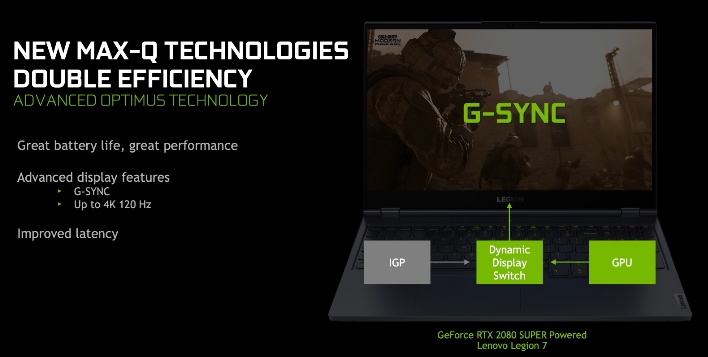 Finally, new Advanced Optimus Technology is being introduced with these GPUs, which now supports G-SYNC simultaneously. This is made possible because the GPU can now output directly to the display without having to go through the IGP first. It also supports up to 4K resolutions at 120Hz, along with improved latency. Finally, there's support for Deep Learning Super Sampling 2.0 (DLSS 2.0), which we've covered in detail in this article.

There are quite a few announcements from OEMs in support of these new systems, and we’ll detail them below:

Gigabyte has no less than 9 new notebooks launching with Comet Lake-H (up to the Core i9-10980HK and GeForce GPUs topping out with the GeForce RTX 2080 Super. The Aorus 5 and Aorus 7 are part of Gigabyte's "Premium Gaming" family and include 144Hz gaming displays, up to a 10th generation Core i7 processor, GeForce GTX/RTX Turing GPUs and an RGB backlit keyboard. The Aorus 5 starts at $1,299, while the Aorus 7 starts from $1,399.

The "Extreme Pro Gaming" entrants include the Aorus 15G ($1,699), Aorus 17G ($1,799), and the Aorus 17X (2,399). These machines can be equipped with up to 10th gen Core i9 processors and come with such niceties as a 240Hz display option, Omron True Mechanical Keyboard, and WindForce Infinity Cooling. These systems are exclusively available with GeForce RTX 2070/2080 Super GPUs.

Finally, there are the "Content Creation" laptops, which include the Aero 15 and Aero 17. These are NVIDIA RTX Studio Laptops available with 10th gen Core i7 or Core i9 processors. They feature Xrite Pantone color calibration, all-day battery life, and of course GeForce RTX 2070/2080 Super GPUs. Prices start at $1,599 for the Aero 15 and $1,699 for the Aero 17.

MSI is entering the fray with three laptops using a combination of Comet Lake-H and GeForce RTX 20 Super GPUs. The 15.6-inch GS66 Stealth ($1,499) leaked earlier this week and is available with up to a 300Hz display, a 99.9 Whr battery, and an Infinity Cooler Boost Trinity+ cooling system.

The GE66 Raider ($1,799) shares similar specs with its GS66 Stealth counterpart, but adds MSI Mystic Light and panoramic aurora lighting displays. MSI also hasn't forgotten about that professionals out there with the Creator 17 ($1,799) that comes equipped with a 17.3-inch 4K Mini LED display that is DisplayHDR 1000 certified.

In addition, NVIDIA says that 10 new RTX Studio laptops with GeForce RTX Super GPUs are coming to market (including the aforementioned models from MSI and Gigabyte). They will be joined by ConceptD models from Acer and the Blade RTX Studio Edition from Razer. NVIDIA says that Hewlett-Packard will be joining the fray as well "in the coming weeks". All of these new RTX Studio laptops will ship with three months free access to Adobe Creative Cloud (which represents a $240 value).

NVIDIA says that many of the new laptops with its GeForce RTX 20 Super GPUs are available to preorder now and will ship starting April 15th.