For the time being, ASUS can lay claim to one of its enthusiast motherboards helping to facilitate a new DDR5 memory record. Using the ROG Maximus Z690 Apex motherboard, renowned overclocker LUPIN_NO_MUSUME took a 16GB DDR5-4800 module paired with a 12th Gen Intel Core i9-12900K Alder Lake processor and cranked it all the way to DDR5-10552.
That's over double the memory module's stock specification, and well past JEDEC's official maximum speed designation, which is set at DDR5-6400. In due time we'll likely see DDR5 memory kits tout speeds of 10,000 MT/s and even higher as time goes on (it's still early in emerging DDR5 era), but for now such high transfer rates are firmly in the realm of overclocking. 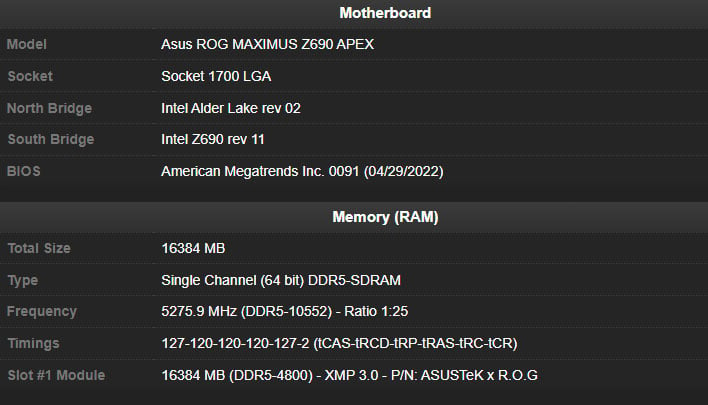 As you might imagine, the memory timings were not exactly tight in order to achieve the record speed. The validated page on CPU-Z indicates they were running at 127-120-120-120-127-2 (tCAS-tRCD-tRP-tRAS-tRC-tCR).
Other key details are not available at this time, including how much voltage was pumping through the memory stick, and what make and model RAM achieved the record speed. We've reached out to ASUS for information on the later and will update this article when/if we hear back.
It remains to be seen how long this record holds. Last November, G.Skill's Trident Z5 RAM set a record at DDR5-8704, and then achieved DDR5-9559 just three months later. More recently, MSI's in-house overclocking team nudged slightly past 10,000 MT/s on its MEG Z690 Unify-X motherboard using Kingston's Fury Beast DDR5 memory.
That's how it usually goes when new technology emerges and we suspect we'll see a few more DDR5 records before the year comes to an end. We also wouldn't be surprised to see memory makers push out even faster kits that what are widely available now, with AMD getting ready to launch its Zen 4 platform later this year, and Intel readying its Raptor Lake CPUs.
Until then, ASUS ROG has earned the right to brag for an impressive feat.