Most records are destined to be broken, and make no mistake, that's going to happen at a breakneck pace in DDR5 land once things really get going. It's already happening, to some extent, with G.Skill leading the way. Earlier this week, for example, G.Skill showboated hitting DDR5-7000 on its Trident Z5 memory, the fastest so far without resorting to exotic cooling. And now it's highlighting a DDR5 world record, obtained while taking a liquid nitrogen bath.
Air and liquid nitrogen represent two very different ends of the cooling spectrum. In time, perhaps DDR5-8000 memory kits will become the norm, or at least somewhat common within the enthusiast RAM sector. In the early going, however, it apparently takes some serious cooling to breach that kind of data rate.
Here's a short clip of it being done...

At the moment, the DDR5 world record sits at 8.704MT/s, achieved with G.Skill's Trident Z5 RGB memory installed in an ASUS ROG Z690 Apex motherboard, alongside an Intel Core i7-12700KF Alder Lake processor.
"Laying claim to the world record for the fastest memory frequency with the latest DDR5 memory, G.Skill and ASUS worked closely together to achieve an incredible DDR5-8704, using liquid nitrogen to cool the system to subzero temperatures," G.Skill explains.
Obviously these sort of showcases are not practical for everyday use—nobody's going to put in a workday while dumping LN2 into a pot for hours on end. But in the realm of extreme overclocking, LN2 is common, and this is an impressive feat. 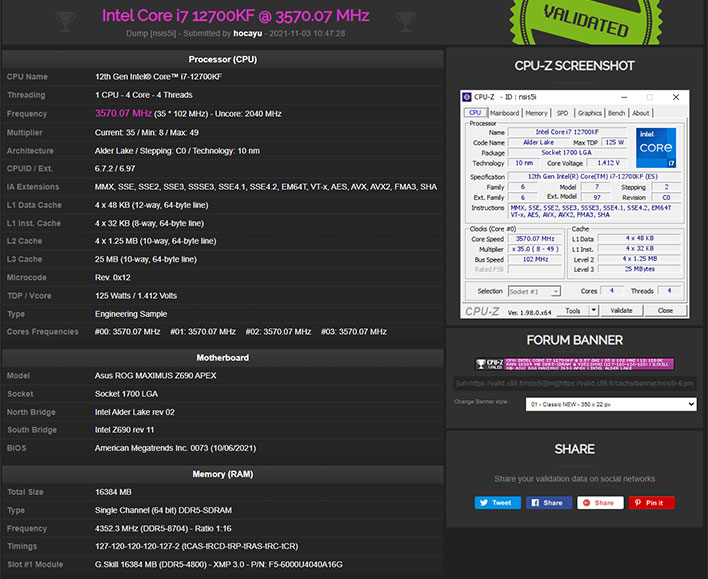 It also required relaxing the timings a bit. Quite a bit, actually—according to the validated CPU-Z entry, the single 16GB DDR5 module running at 8,704MT/s (effectively) had its timings loosened all the way to 120-120-120-127. To put that into perspective, G.Skill's Trident Z5 RGB DDR5-6400 memory runs as 'low' as 36-36-36-76.
Ultra-relaxed timings aside, this is now the data rate record to beat. And we have no doubt it will be broken, probably in short order. The question is, which will memory will be the first to hit 10,000MT/s?