Typically when introducing a new series of CPUs, along with their accompanying platform, Intel will publish a platform overview diagram (or the very similar "Chipset Block Diagram") that lays out all of the links between the processor, chipset, and their various I/O. We can recall seeing these at least as far back as the LGA 775 Pentium 4 era, and probably before that.

Well, the image below is a photo of such a slide being projected onto a wall at an event in Shenzen, China. It was shared to the wider internet by one @9550Pro_, more properly known as HXL on Twitter. Presuming the image is real—it certainly looks the part—it lays out all of the I/O available on the LGA 1700 platform with a Z790 chipset and Raptor Lake-S desktop CPU. 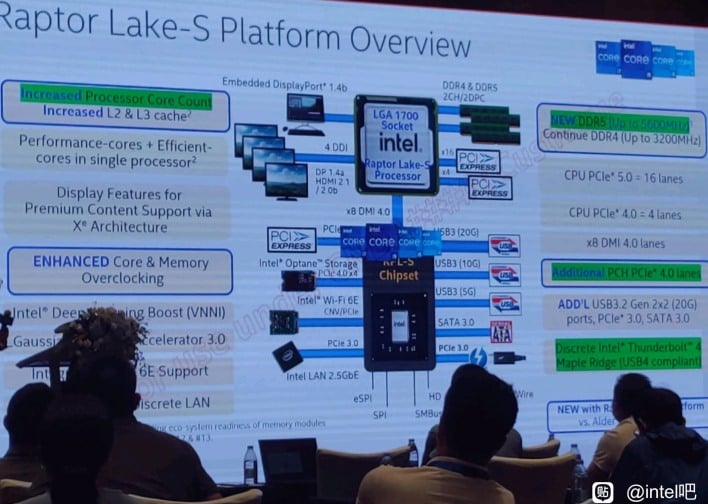 A few things jump out at us. Not the increased core count or cache capacity; we've known about those features for a while. DDR5 memory speed jumping from 4800 MT/s to 5600 MT/s is pretty interesting, though. Likewise so is "enhanced core & memory overclocking," whatever that actually means. There's no Thunderbolt or USB4 support built into the platform, but Intel will gladly sell you a discrete Maple Ridge controller you can add for that functionality.

Perhaps the most interesting omission on the diagram is PCI Express 5.0 for the four "spare" lanes coming off the CPU. Those lanes, which are normally routed to an M.2 SSD socket, are limited to the 4.0 revision. Frankly, the loss of PCIe 5.0 for the boot drive might look bad next to AMD's top-end platform, but it is really very unlikely to be of any practical relevance for the entire useful life of these systems.

The only other curious detail that we could glean from the leaked slide was the support for 2.5 GbE in the chipset. That'll still require motherboard manufacturers to wire up a 2.5 Gbps Ethernet port, of course, and that could be more expensive than a simple GbE socket. Still, it'd be nice to finally see standard LAN speeds creep above 1 Gigabit.

We don't know exactly when Raptor Lake will hit store shelves, but it should be before the end of the year.