The era of DDR5 memory will begin in earnest later this year when Intel releases its Alder Lake-S processors, followed by AMD launching its Zen 4 lineup—both will offer support for the next-generation memory standard. As that day approaches, memory makers are getting their ducks in a row. We've already seen several DDR5 announcements, and Netac is apparently hyping the development of upcoming RAM that can run at a blazing fast 10,000MHz.
That's almost twice as fast as the speediest DDR4 kit on the planet, which is TeamGroup's recently announced T-Force Xtreem DDR4-5600MHz memory. Most existing DDR4 kits fall withing the 3000-4000MHz range, with higher speeds typically being reserved for extreme overclockers, including those who chase world records.
Incidentally, TeamGroup is also working on DDR5 memory modules, though so far has only announced DDR5-4500MHz modules. Meanwhile, Samsung has been touting the industry's first 512GB memory module based on high-k metal gate (HKMG) technology, which it says can operate at up to 7,200MHz. Netac aims to beat them both. 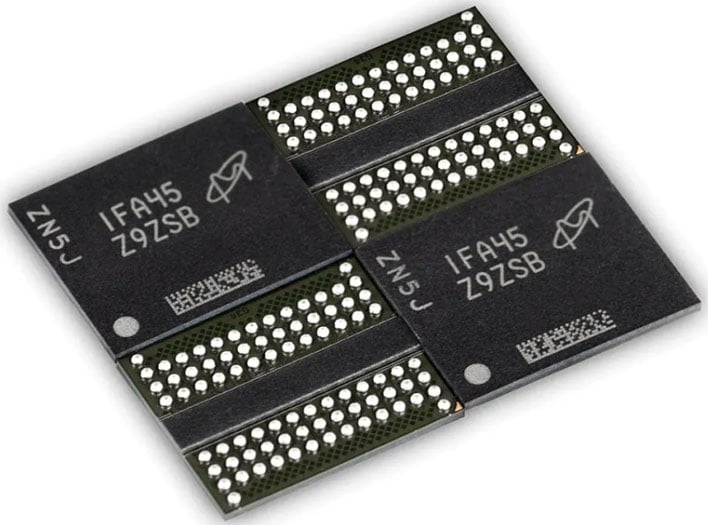 In preparation for the DDR5 era, Netac has apparently secured its first batch of DDR5 memory chips from Micron, and is busy developing upcoming products around them, according to ITHome. They have the product code IFA45 Z9ZSB.
These are said to be engineering samples, each with a capacity of 2Gx8 and loose 40-40-40 timings. We suspect these are not the specific chips that will hit 10,000MHz, as it is said Netac is investing into research and development of DDR5 memory modules that could hit such a breakneck speed, for supercharged gaming PCs and high-end setups.
Not that we see 10,000MHz being a literal game changer for gaming. But you can bet companies will pitch high-speed kits aggressively to gamers, when they arrive. Beyond the raw speed gains that await, DDR5 will also introduce some other notable upgrades, like baked in ECC (error correction code) support, which to the chagrin of Linus Torvalds has mostly been relegated to server RAM up to this point.