In the world of competitive DRAM overclocking, G.Skill is very much an active participant, often bragging about setting frequency records. The company has not done that yet for its latest achievement, perhaps because it's on the verge of having one of its Trident Z5 DDR5 memory kits hit 10,000 MT/s. There's not far to go—over at HWBot, G.Skill's Trident Z5 sits at the top spot. Again.
G.Skill is mostly (though not entirely) leapfrogging its own DDR5 speed records at this early stage, having two weeks boasted about reaching 8,888 MT/s. That feat was achieved by "lupin_no_museume" with a kit Trident Z5 memory taking a liquid nitrogen (LN2) bath while installed in an ASUS ROG Maximus Z690 Apex motherboard. And just a few weeks prior to that, G.Skill was celebrating a DDR5-8704 world record.
Both are not old news. The new record currently sits at DDR5-9559, which was once again achieved by lupin_no_museume in the same ASUS ROG motherboard. And of course this was done with a steady supply of LN2. 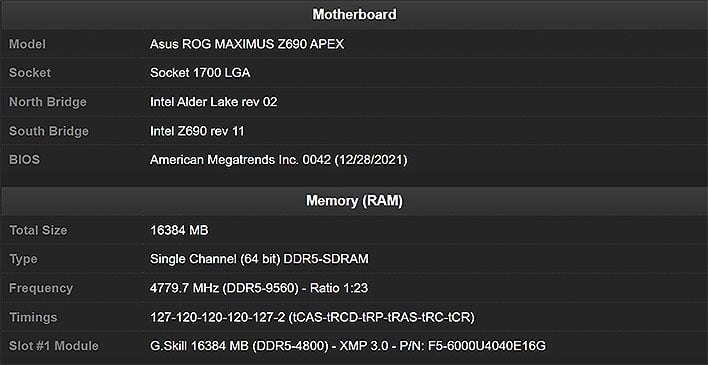 The record is officially recognized as DDR5-9560 (effective), a slight rounding up from 9,559.4 effective (4,779.7). Regardless, this stands as the fastest validated DDR5 speed. And like with the previous record, the overclock had to seriously relax the memory timings, setting them at 127-120-120-120-127-2 (tCAS, tRCD, tRP, TRAS, tRC, tCR).
That's way up from the 88-88-88-88-127-2 timings that were used to set the previous record at DDR5-8888. Getting to DDR5-10000 may require relaxing them even further. Combined with the need for LN2 cooling, it's probably fair to say consumer-based DDR5-10000 memory kits are not right around corner (though they will eventually manifest).
All that said, it will be interesting to see if G.Skill ends up being the first to 10,000 MT/s in the professional overclocking space before. It's worth noting that on HWBot, second-place (DDR5-8904) belongs to a kit of Teamgroup memory install in an MSI motherboard. The race is on.