We are headed into a flurry of high-profile product launches from the likes of NVIDIA, Intel, and AMD. The Big Three are all releasing, or expected to release, new generations of their CPUs, GPUs, or both. Of all of these, though, the subject we have probably heard the least about is AMD’s upcoming RDNA 3 architecture. This morning, AMD released a blog post to provide some color behind its claims of “more than 50%” performance per watt uplift over RDNA 2. This may lend credence to a new rumor that these GPUs may reach near 4GHz clock speeds.

This rumor comes to us by way of perennial Twitter leaker @9550pro. The bold claim of “Almost 4GHz GPU” is supported only by an accompanying photograph of Dr. Lisa Su on stage in front of a Radeon GPU image. Current RDNA 2 GPUs can sometimes be pressed to clock around 3GHz, though 2.6GHz is more typical. Tacking on nearly a gigahertz more would be quite the accomplishment. So, is this leak just a bunch of hot air? 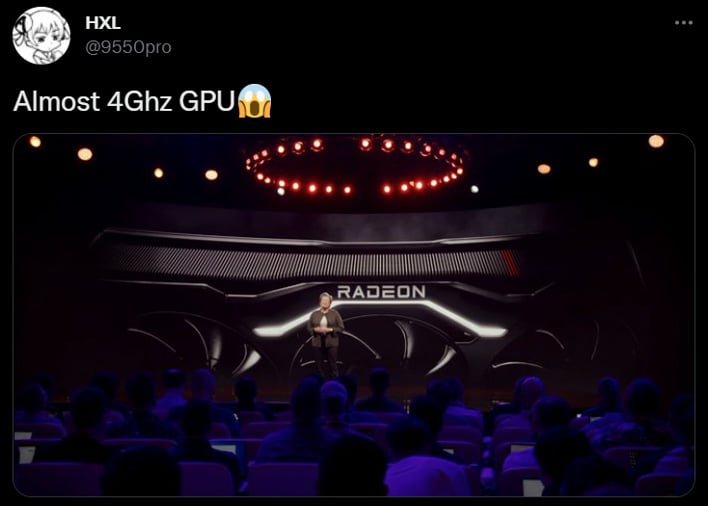 Almost on cue, AMD published its blog post this morning discussing the company’s performance-per-watt commitment. In it, AMD underlines the demand for new techniques like ray tracing, variable rate shading, and advanced upscaling technologies with the acknowledgement that these drive power consumption ever higher. AMD claims its Radeon 6000-series has delivered both generational efficiency improvements and better framerates per watt than competing solutions from NVIDIA with few exceptions. 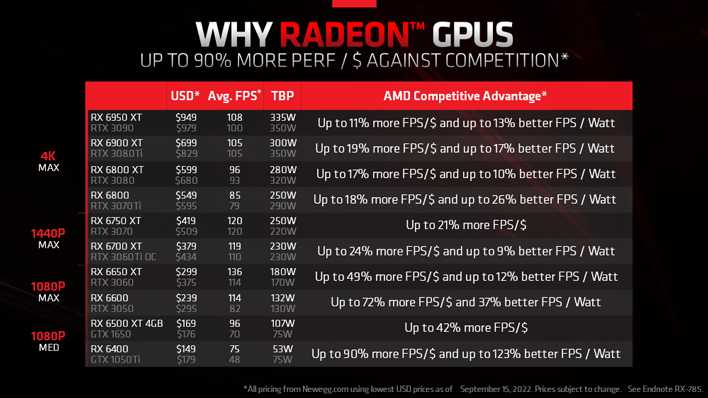 These are existing solutions, though, so what does this mean for the “Almost 4GHz” RDNA 3 claim? AMD goes on to explain how it is “continuing [its] push for more efficient gaming with AMD RDNA 3 architecture.” The company claims the move to a 5nm process combined with the chiplet packaging strategy help achieve the “estimated >50 percent better performance per watt” over current RDNA 2 architecture.

AMD says these architectural improvements are complimented by refinements to the adaptive power management system used in RDNA 2 and a new generation of Infinity Cache. The adaptive power management features tune the GPU’s power usage to match the current workload. This helps GPU components avoid drawing power unnecessarily. AMD Infinity Cache is situated between L3 cache and GDDR6 memory which reduces dependence on the latter. This improves bandwidth and further decreases power consumption.

Other leakers have previously discussed RDNA 3 dies having reduced area as well. The Graphics Compute Die (GCD) portion is expected to be about 350mm²—a shrink from about 375mm² for the comparable portions of RDNA 2. The exact size comparisons are complicated by the new chiplet packaging approach, but the takeaway is that we can expect much higher density in the new architecture. In addition to the die shrink, this is accomplished through discarding old “architectural bloat” including support for the old XGMI GPU-to-GPU interface, legacy geometry pipeline, and legacy scan converter. 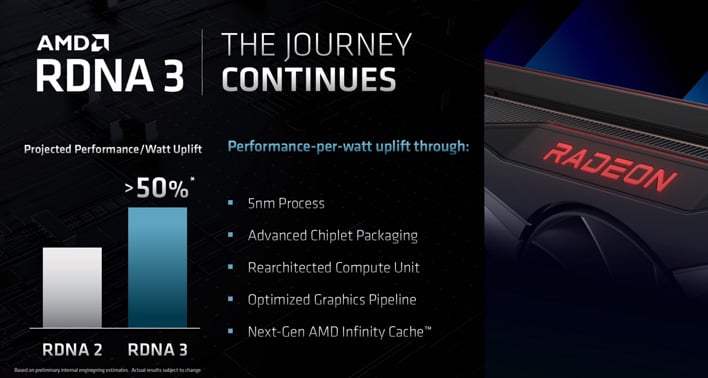 Of course, when efficiency gains are made, companies are not content to simply deliver the same performance at less power. Instead, these uplifts are used to churn out more performance at the same power envelope. With processors of any variety, this typically manifests as higher clock speeds, tacking on additional cores, or both. As such, it is not out of line to imagine seeing RDNA 3 clock speeds north of 3.6GHz, especially if this is referring to short bursts and not sustained averages. It may also be the case that these near-4.0GHz clocks were only achieved with exotic cooling and extreme overclocking.

Clock speeds are far from the entire performance picture, either. GPUs are highly parallelized compute devices which cannot be adequately evaluated with a single hardware specification. Such high clock speeds are certainly a promising metric, though the emphasis on efficiency may be an indicator that AMD feels it may lose out to NVIDIA in terms of raw power. We will be keeping a close eye on how these stack up against the NVIDIA GeForce RTX 4000-series and Intel’s Arc Alchemist cards in the weeks and months ahead.