The latest information seems to indicate that the top-end RDNA 3 design, known as Navi 31, will have a single "Graphics Compute Die" (GCD) flanked by six Memory Controller Dice or Memory and Cache Dice (MCDs). The graphics compute die is obviously where the magic will happen, while the MCDs will connect the chip to GDDR6 memory and cache the contents of said memory with either 32 or 64 MB of Infinity Cache. 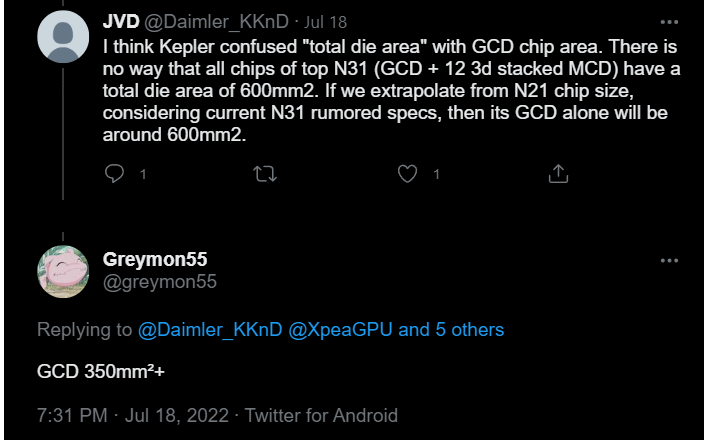 As part of a long Twitter thread discussing the upcoming GPUs, industry insider and Digimon enthusiast Greymon55 peeked in to offer his knowledge to the die area discourse. Another known leakster, Kepler, had commented that the Navi 31 "total die area" was in the ballpark of 600 mm², which is consistent with earlier rumors.


According to Greymon55, the GCD, the actual "processing" part of the GPU, will only be 350 mm². This is controversial primarily because seems like an improbably small processor for the predicted specifications of Navi 31. The top-end RDNA 3 part is expected to have 2.4x the shader cores of Navi 21, and even if we account for the shift to TSMC 5N, as well as the removal of the memory interfaces and Infinity Cache from Navi 21, we would still be looking at some 375 mm², according to German site 3DCenter.

Kepler and Greymon55 are actually in agreement on the die area. Kepler's original statement about "total die area" seems to have been including the six MCDs that we expect the final product to have. He himself commented on the surprise at the die area prediction, noting that the RDNA 3 architecture actually discards "a lot of old architectural bloat."

That includes things like the XGMI GPU-to-GPU interface that was used on the Radeon Pro Duo, the legacy geometry pipeline (meaning that RDNA 3 exclusively uses the Next Generation Geometry design that was implemented but not functional in Vega), the legacy scan converter is gone so there's no hope for analog outputs on these chips, and Vega's Global Data Share function is apparently removed, too.

So saying, the Navi 31 GCD appears to be very dense with compute indeed. We're dying to find out whether this Radeon GPU can compete with NVIDIA's monstrous monolithic AD102. Both cards should be out by the end of the year.