ASRock Issues BIOS Updates For Crazy Long Boot Times On Ryzen 7000 PCs But Is It Enough?

When AMD's Socket AM4 platform for its brand-new Zen processors debuted, it came along with a number of growing pains. Most pressing were those related to the memory controller, but there were problems with USB connectivity and some early reliability issues, too. It's natural to expect there'd be similar teething troubles with Socket AM5. An alarming rumor seemed to indicate as much, but apparently ASRock's already got it all worked out.


The original leak came from a reliable source, regular leakster HXL (@9550pro on Twitter). According to HXL, ASRock's X670E motherboards could take an incredibly long time to start up on a fresh boot: as long as 400 seconds, or nearly seven minutes. 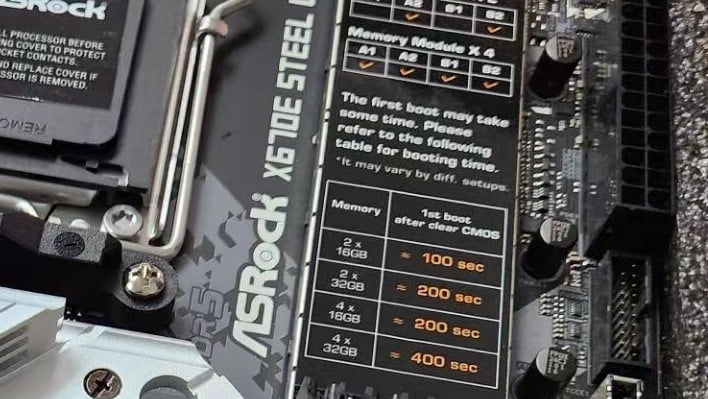 
HXL provided a picture to prove the veracity of his claim. It appears to show an ASRock X670E Steel Legend motherboard with a Memory Installation Guide sticker applied over the memory slots. This is clever, but the concerning part is the chart down toward the bottom of the sticker that remarks, "The first boot may take some time."

As you can see, it clearly states that the first boot will usually take upwards of 100 seconds, with the time increasing based on memory capacity—all the way up to 400 seconds. HXL himself posed the question on everyone's minds: is this a Zen 4 limitation, or is this an ASRock issue?


Well, surprisingly, ASRock decided to clear the air and come clean: it's an ASRock issue. At least, that's the reasonable assumption after the company announced in a very brief press release yesterday that it would release BIOS updates "decreasing AM5 booting time" after the launch of its new motherboards. How much of a decrease? ASRock didn't say, but we'd expect it to be significant if they're crowing about it before the boards are even out.


Curiously, it looks like the boards will in fact ship with the slow-booting BIOS, which means first-time setup with ASRock's AM5 motherboards might still take a while. Then again, as ASRock points out, all of the affected boards support the popular BIOS Flashback feature, meaning that you don't even have to install a CPU or RAM to flash the firmware.

If you want to skip the "will it or won't it boot" experience, unpack your board, hook up the power supply, grab the BIOS update from ASRock's site, and flash it before you ever attempt to start it up. Otherwise, it looks like folks will have to fiddle their fingers waiting for the board to do whatever it's doing on first boot.