Lightweight gaming notebooks don't have to be slow: something that has been proven out time and time again by products like Razer's Blade series and ASUS's ROG Zephyrus G14. Because of that, more and more gaming notebooks are thinner and lighter than their predecessors. Performance doesn't necessarily scale linearly with power consumption, so a drastic power cut might result in only modest performance reduction. That's something AMD is banking on with its 2022 mobile graphics processors, the Radeon RX 6000S series. But hang tight, high-powered gamers, because there's more in the wings for you, too.

AMD says the Radeon 6000S series, which is made up of the Radeon RX 6600S, 6700S, and 6800S, are built from the ground up for gaming notebooks that are upwards of 20% thinner than traditional designs—or less than 20 millimeters thick—and weigh under 4.5 pounds. This lightweight segment has seen incredible growth in recent years, outpacing all other gaming notebooks by a multiplier of three, citing research from IDC over the last several years.

Just because power consumption is down across the board doesn't mean these GPUs are slow. AMD claims that the Radeon RX 6800S targets 1080p displays at max settings and should hit 100 frames per second on average over the course of their benchmark suite, which includes popular recent releases like Resident Evil Village and Age of Empires 4, alongside multiplayer mainstays like PUBG and Fortnite. We don't know yet if the RX 6800S will have the same configuration as its higher-power sibling, but the RX 6800M has 40 Compute Units (CUs) with a total of 2,560 stream processors and a 192-bit path to GDDR6 memory. 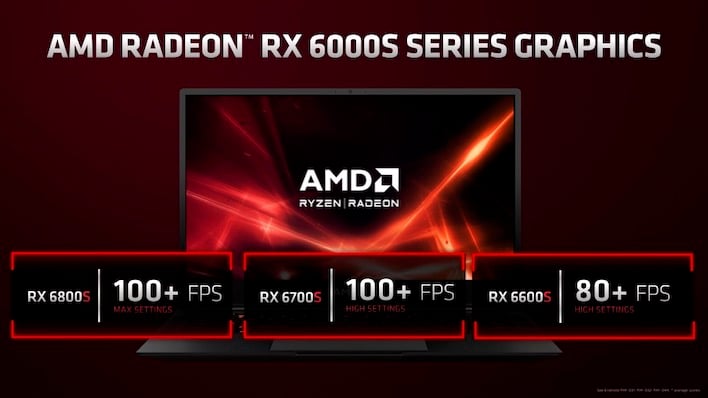 Meanwhile, the Radeon RX 6700S purportedly hits the same 100 fps threshold at High presets, a step down from Max where many games make minuscule image quality trade-offs in favor of big performance gains. On the lower end, the Radeon RX 6600S is targeted to hit 80 fps in that same group of games with the same High presets as the bigger 6700S. Those are big performance targets that are just begging to be tested. The specifications for each GPU haven't been unveiled yet, but for reference the previous Radeon RX 6700M has 36 CUs good for 2,304 stream processors with a 160-bit bus to memory while the Radeon RX 6600M has 28 CUs for 1,792 stream processors and 128-bit memory.

For those who don't mind a little extra heft in exchange for more performance, the Radeon RX 6000M series is getting a refresh, as well. There are no fewer than five new models across the lineup, with a grand total of at least 18 new model introductions the company says are slated to be made across 2022. The Radeon RX 6850M XT is the company's fastest mobile GPU with 14% faster memory speeds and upwards of 7% higher boost clocks than the previous RX 6800M XT, and as a result it's on average around 7% faster than the previous top-end Radeon. AMD hasn't specified any other changes to the GPU configuration so we have to figure the 40 CU and 192-bit memory configurations remain unchanged. 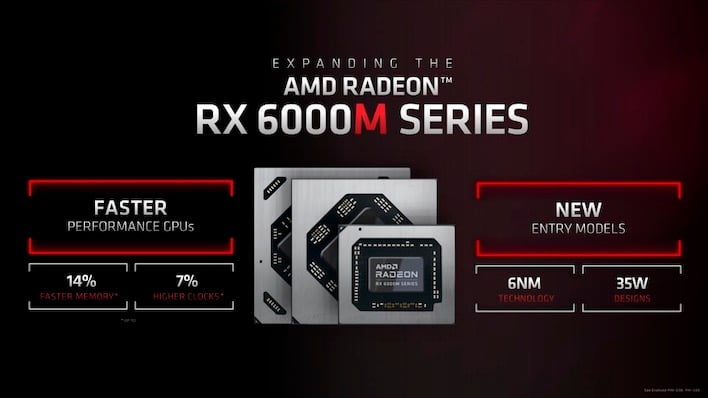 A step down from there is the Radeon RX 6650 and 6650 XT, both of which are up to 20% faster than the previous Radeon RX 6600M. At the bottom reside the Radeon RX 6500 and RX 6300, which are two brand new model designations that target entry-level gaming setups. Rather than compare these GPUs against its own offerings, AMD claims that both of them are a minimum of 200% faster (that's three times as fast, according to our math) than the GeForce MX 450 mobile GPU that is currently NVIDIA's low-end offering.

AMD doesn't say that any of the GPU configurations have changed, but all of the GPUs introduced today are built on a 6-nanometer process, which Intel has previously reportedly tapped for its Ponte Vecchio GPUs. While they've been rumored for a little while, all of these mobile GPU products should be available pretty soon. AMD announced a number of design wins for its notebook GPUs, including Alienware's M17 R5, the 2022 version of ASUS's ROG Zephyrus G14, and what AMD says are another 20+ notebook design wins in the pipe, alongside a large number of desktop design wins. 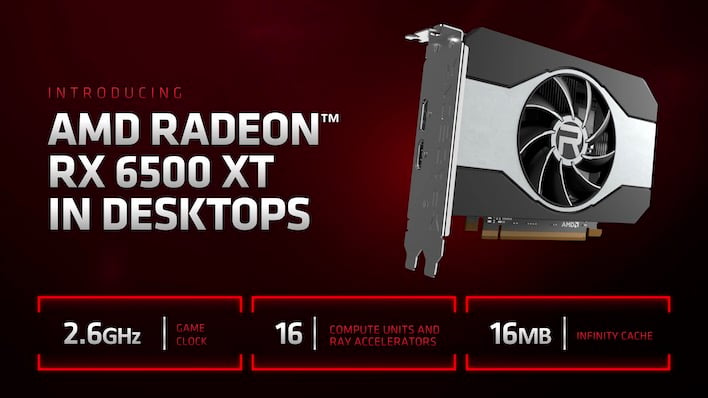 Desktop gamers are going to find something in AMD's CES offerings as well, though it's focused on the lower end of the spectrum. The Radeon RX 6500 XT will be an OEM option in some gaming desktops. The Radeon RX 6600 XT is a nice 1080p gaming card, but AMD is focusing this entry-level gaming card at the same audience as NVIDIA's GeForce GTX 1650 with much higher performance.
The Radeon RX 6500 XT has 16 CUs (which works out to 1,024 stream processors) complete with DXR-compatible ray tracing acceleration, a first in this class of graphics card. There's 16MB of Infinity Cache to speed up processing and a whopping 2.6GHz Game Clock on tap, as well. AMD didn't say it, but we expect these cards will likely have 4GB of video memory and a 128-bit memory bus, but that's subject to further clarification on the company's part. 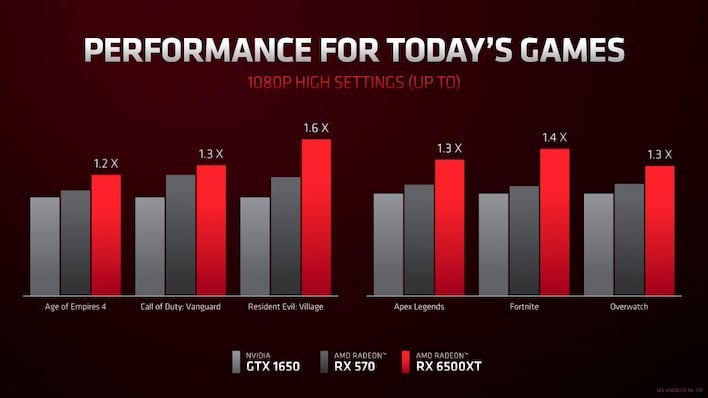 As far as performance goes, AMD says the Radeon RX 6500 XT will be an entry-level barn burner. By its reckoning, the littlest Big Navi is 60% faster than the NVIDIA competition in Resident Evil Village, though that factor drops to closer to a 30% advantage in Call of Duty Vanguard, Apex Legends, and Overwatch. Regardless, any new performance is both welcome and expected, as the GeForce GTX 1650 it's competing with has been around for nearly three years now. The Radeon RX 6500 XT will start to appear in desktops later this month, on January 19th.